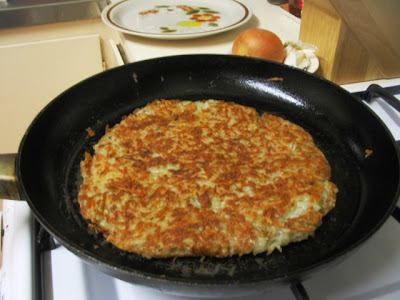 This is a light meal I made last week on a day when energy failed me after a fruitless dash into town after work looking for a replacement dishrack because ours keeps falling apart.

I was wanting hot chips and thought some potato rosti might do the trick – crisp on the outside and soft and fluffy inside. I grated 3 medium potatoes, squeezed some of the water out. Then I melted about a teaspoon of butter in a non-stick frypan and placed the grated potato in it. I sprinkled a bit of salt on it for taste.

I would like to say I just left it to cook. But I can’t help a little bit of meddling. That is how I learnt to cook with my mum – poking a spoon in here and giving that a stir. So I keep pushing my eggflip (which some might call spatula?) under the mixture to make sure it wouldn’t stick. That was my main concern – that the mixture would fall to bits when I tried to turn it over.

Meanwhile my mum rang so I chatted to her while it cooked. When I told her I was cooking potato rosti, she said her mum used to make it on Fridays (her family being good Catholics who didn’t eat meat on Fridays) and they called it mock fish. She said they thought it was food for poor people and were surprised when potato rosti became a bit posh. Interestingly, according to the Rösti page on Wikipedia, this dish was originally eaten by farmers in Switzerland (I looked

for mock fish on Wiki but they are yet to acknowledge that the potato-loving Irish had their own version). Rosti is something you can dress up or dress down but it is mercifully easy, and surely tastes much better than a wartime mock fish recipe I saw recently while browsing in a bookstore.

My mum told me I needed to squeeze the moisture out, and I was pleased I had, given that I had not consulted any cookbook. When it came to turning it over, it all flipped in one piece which seemed nothing short of miraculous but then I thought maybe some cultural memory was guiding me. I’d like to think so. In fact it was lovely and crisp – I had it over a medium heat for probably 40-45 minutes all up (can’t quite remember how much time each side) which I think was why it worked. I mustered all my patience to wait til it was golden brown on each side.

We ate it with chopped tomato and cucumber and a bit of yoghurt. Dinner was a bit light that night – probably would have served one rather than two. If I was to do this again, I would do a more substantial salad (chickpeas would have been good) and maybe more potatoes. Luckily we had brownies for dessert!

On the stereo:
Low Symphony: Philip Glass
Posted by Johanna GGG at 22:00