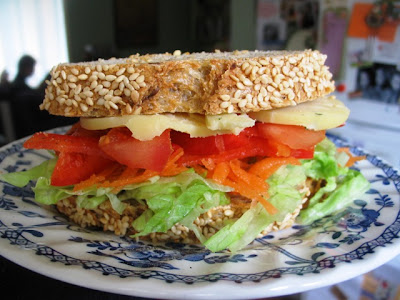 I often proudly tell how my six brothers and sisters all had jobs at fast food takeaway chains, but I ended up with a job at an obscure inner suburban takeaway shop called Fresh and Healthy. I am glad I never worked flipping burgers for places which seem to spend their dollars on flashy advertising rather than good food.

Truth be told, I never enjoyed my job at Fresh and Healthy which served a lot of chicken schnitzel sandwiches that have a dubious claim to healthy food. But I did learn to make a pretty damned good salad sandwich. I used to make them for housemates and every now and again I make one for E.

On Saturday morning we got a loaf of multi-seeded bread from Sugardough (Lygon St East Brunswick). It is one of those dense loaves that give you a sore arm as you saw a slice off it. After my beans at Rumi for brunch, I needed some veggies, and having some lettuce after my taco-making on Friday, the opportunity presented itself for a salad sandwich.

When I had set off for the market in search of an iceberg lettuce I hadn’t really thought about them being seasonal until I saw what was on offer – they were small, wilted and expensive. So I guess it isn’t lettuce season. Some references I have found say it is lettuce season all year round 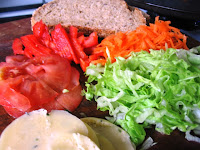 but these lettuces looked well past their best. So I probably will try not to have a yen for lettuce meals til the sun shines a bit more warmly on us. But on Saturday I had lettuce so I was going to use it.

The way I do my salad sandwich is to have shredded lettuce, grated carrot and thinly sliced tomato as a base on one side of bread. On Saturday I also used thinly sliced red capsicum. Other veggies I like to include are sliced mushroom, dill pickle, sprouts, beetroot (from a can). Too many veggies can become a bit of a balancing act but I enjoy the challenge. I usually like to add sliced cheese and we have a fine vintage onion and chive cheese which added a lot of flavour. Finally I add a bit of pepper and some mayonnaise (if it is available which it wasn’t in deep midwinter in my fridge).

The trick is not to load the sandwich so much that it falls apart. I usually have a wee bit much in it but who can resist all those good veggies. It tasted sensational – like a summer breeze!

On the Stereo:
Songs in the Attic: Billy Joel
Posted by Johanna GGG at 22:23