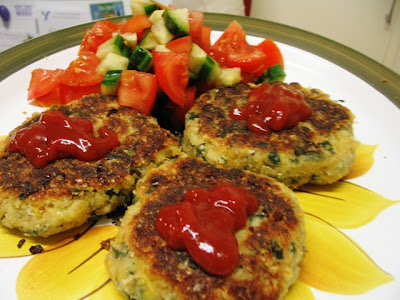 I found myself home on Sunday night after a few nights out, having brought home a bag of vegetables from my sister's place. Francesca's partner, Steve, has started working at a market job which means he brings home boxes of vegetables. Which is excellent motivation for getting different vegetables into my diet.

Courtesy of Steve, I brought home a bounty of cauliflower, parsnip, silverbeet, baby leeks, basil, sage. Now I confess to a particular aversion to silverbeet when I was young. My mum grew it in

the garden and it seemed to be the sort of thing she would serve with cabbage and corned beef - one of my worst meals of childhood (sorry mum)! So although I wouldn't buy it, I was interested to consider how to use it. It has lovely green leaves after all, so it can't be all bad. For those who don't hail from these parts, I think it is called Swiss Chard elsewhere.

Various possibilities for the vegetables came to me: pasta sauce, a rice dish or even roast veggies. But I ended up taking the easy way out and making vegetable burgers with them. I have been tongue in cheek and called them Beggars Burgers because, as we all know, beggars can't be choosers, and I feel I didn't choose these vegetables. But I actually was quite pleased to have risen to the challenge of using what I had on hand.

The burgers were an exellent way of using silverbeet - it gave the pale burgers some lovely green flecks and didn't taste too overwhelming. But I have a small confession - I didn't use the stalks. I put in a tin of creamed corn which I thought would go well with the vegetables and help to bind them. I probably would have used more breadcrumbs if I hadn't had a breadcrumb 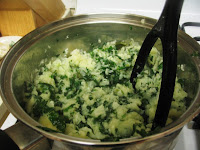 shortage - which is also why I coated them in flour instead of breadcrumbs. I also fried them in some chilli oil which made them particularly spicy. E loved them.

Now I was excited to see that the 'Waiter there's something in my ...' event had chosen the Meatless BBQ this month and I had hoped to participate as I love a BBQ as much as the next meat eater if there is a decent vegetarian offering. But last night the internet was playing up on me so I am hoping that Jeanne of Cooksister will show some mercy and take a late submission. I also wanted to reply to her request that if there are sad people like myself who do not have a BBQ, then we could either cook it on a griddle pan or wrap it in foil! (PS - she accepted it - see this recipe and lots other great ones at the round up)

I must protest that vegetarians at BBQs are even sadder than she thinks. I have been at BBQs where everyone is outside enjoying the sun and the smell of charcoal while I am inside cooking my vegetarian sausages on a frypan or under the grill! Yes, BBQs can be the bane of a vegetarian's life. As the years have progressed, I (and my family whose BBQs I grace most frequently) have sorted it out a little. Now mostly my vegetarian offerings go on foil on a BBQ so 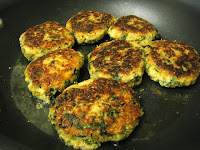 they don't taste of meat. But here is where Jeanne made me think about griddle pans. When you barbecue meat, it is a little scary to see the amount of fat that it releases. Barbecuing vegetarian burgers or sausages seems the opposite - they dry up so easily that often they need to be doused with oil. Hence, the need for meatlovers to use griddle pans to drain away the fat, but for vegetarians they are really just a bit of window dressing if you want some nice charred lines on your food. And this is my convoluted excuse that I am sending to Jeanne for not owning or using a griddle pan.

Having said all that, I would happily put these burgers onto the BBQ but only after they have been pan fried first to seal them - they were so moist, I would worry about putting them straight on a BBQ and finding that half of them were stuck to the grill. This again is based on experiences I have had at BBQs. Vegetarians can have BBQs but like most meals, need to think differently to carnivores if they want them to work. Having said that, our current warm weather (up to 22c this week) as we near the end of winter makes me look forward to summer and enjoying some BBQ meals outside.

Chop cauliflower and parsnip and place in a medium saucepan with about 2 inches of water. Bring to boil and simmer for about 12 minutes til a knife goes easily into them. Add finely chopped baby leeks, and finely chopped green leaves of silverbeet, and simmer a further 2-3 minutes til wilted. Drain and mash well.

Add remaining ingredients except flour and oil. Mix well. Place a pile of flour in a shallow bowl. Take handfuls and use your hands to shape into small burgers (and be prepared to have messy hands by the time you have finished). Toss each burger in the flour to coat. Ideally, place in the fridge for at least an hour to firm up. As my life is never ideal, I placed some of them directly onto the frypan and left the remainder uncooked but covered in the fridge til the next evening.

Heat 2-3 tablespoons of oil in a large non-stick frypan. Fry patties for about 20-25 minutes over medium-to-high heat, turning over during this period to ensure they are well cooked either side. If you want to put them on the BBQ or in the freezer (or reheat later in the oven) then just cook lightly each side.