Ruby Crumble of rhubarb and raspberries! 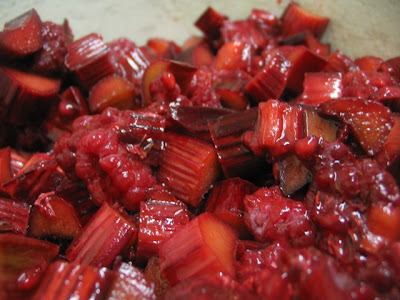 Once I got my Enchanted Broccoli Forest into the oven last Saturday when Kim and Jo were over, I turned my attention to the important issue of dessert! I often make cakes but I had initially thought I would make a rhubarb and strawberry crumble. I have seen a few berry crumbles on blogs lately.

Here is where I must pause to reflect on dessert. I grew up in a household where my mother made cooked desserts most nights. In fact I was always a little dismayed to just be offered a bought biscuit when I was at dinner with school friends! Yet I now rarely make dessert. If I have been baking, we have some baked goodies but I usually prefer fruit fresh rather than cooked. I love apples when in season but I am not a big fan of stewed apple that my mum would put in crumbles, pies and sponges. When friends come to dinner these days I often make cake.

But lately I have started to see sense in baking desserts. Firstly, when I was reading Barbara Kingsolver’s Animal Vegetable Miracle, the family set out to eat locally and started out the year at the end of winter with virtually no fresh fruit. I kept wanting to tell her they should have had stewed fruit on hand. But I also have been craving fruit lately in a similar way.

I love seasonal fruit but I do tend to eat lots of fruit in season and then towards the end of the season I tire of apples or nectarines or mandarins or pears, and they aren’t tasting so good when they are no longer as fresh. It takes me a while to adjust to a new season. So lately, as we near the end of winter, I have wanted fresh fruit but not found it appealing. Cooking fresh fruit seems odd, but having fruit preserved to eat out of season suddenly makes a lot of sense. I now see just how much fruit my mother made us eat through eating desserts.

However I had some problems thinking about doing a strawberry and rhubarb crumble. I wanted to do it but was feeling ridiculous about using out of season strawberries. Then at my recent farmer’s market outing, I bought Di’s rhubarb for the crumble and some of her rhubarb and raspberry jam. The combination made sense as soon as I saw the frozen raspberries for sale at another stall. I would make rhubarb and raspberry crumble.

Next challenge was finding the recipe. I knew I had seen recipes for rhubarb and strawberry crumble but couldn’t remember where. Unfortunately it wasn’t til the next morning that I remembered Holler had an excellent recipe on her blog. But I had remembered that Tara had a 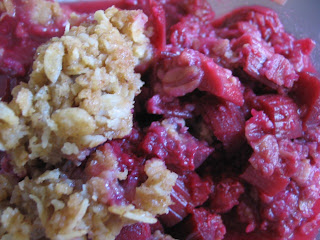 recipe for a strawberry and coriander crumble which interested me because it had a very oaty crumble. One of my guests, Kim, has a gluten free diet but can eat a little gluten. I had looked for gluten free crumbles and not found any to inspire me so I thought this recipe with mostly oats (which my reading tells me can be eaten by some on gluten free diets) and a tiny amount of flour, might be the next best thing.

So I used the ingredients from Tara’s recipe but instead of her method of freezing and then breaking up the crumble, I just did my usual method of rubbing the butter into the ingredients, which seemed to work fine. By the time I was making it I didn’t have time for fancy freezing techniques. I also couldn’t decide on if I should cook the rhubarb first or not. I found a Vikki Leng recipe for stewing rhubarb using honey and lemon which I used rather than sugar. But quite a lot of recipes didn’t precook the rhubarb so I thought I could get away without it.

The crumble was lovely with all the oats. (It was ok although probably not ideal for Kim). But the rhubarb was only just cooked – it kept its shape and even the occasional crunch rather than being the stringy slush that we know and love. Next time (as my mum has advised after the event) I will cook the rhubarb first, so I have amended the recipe to reflect this. But it still was a great dessert with brilliant colour, great texture and wonderful flavours. Jo said it tasted like a really good muesli which I thought was a great way to describe it. It indeed did feel more healthy than my usual cakes.

I forgot to take a photo so the photo of the actual dish is from the next morning but the one of the fruit is before I put it in the oven when it was such a divine ruby red! Here is what I did.

Update: for a more satisfactory rhubarb crumble - see my rhubarb and pear crumble - I think it works better to cook the rhubarb first from this experience.

400g bunch rhubarb, topped and tailed, and chopped
⅓ cup honey (I used a bit less than ½ cup and found it a bit much)
Juice of one small lemon
350g frozen raspberries

Cook rhubarb, honey and lemon approximately 10 minutes til rhubarb is just done. Cool a little while you make the crumble.

To make the crumble, rub the butter into the remaining crumble ingredients til mostly mixed – mine wasn’t quite mixed and seemed ok.

Add raspberries to rhubarb mixture and stir. Place in greased baking dish and top with crumble. Bake at 180ºC for 30 – 40 minutes or til crumble is golden brown and crisp. Serve with cream or yoghurt or (an excellent idea by E after the event) custard!

On the stereo:
Seeds of Happiness, part 1: Jeffrey Roden
Posted by Johanna GGG at 17:53