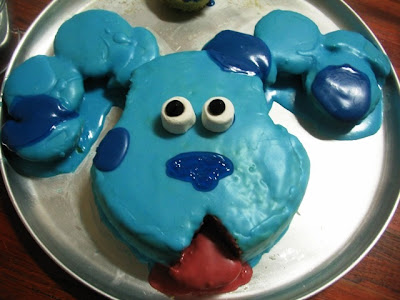 My sister Fran is in the middle of party season for her partner’s kids and organized a party for Dylan on the weekend. It was a barbecue in the park – sausages and hamburgers on the electric barbie, and lots of bread and tomato sauce to eat them with (and veggies sausages for me!).

Fran chose blue as the theme and asked me to help her with doing a Blues Clues cake – she knows I love a fun cake and had found an idea on the internet. So on the Friday before the 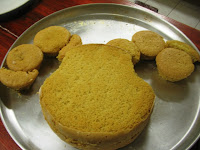 party, she cooked E and I a curry, and while the boys watched a dvd, we set to work on a plain sponge cake that she had prepared earlier.

It was the first sponge cake she had made – actually I call it a butter cake because my mum’s sponges are light and fluffy and not at all good for kiddie cake decorating. Fran had problems finding a plain cake recipe and ended up with an American one off the internet which is unsatisfactory if you are used to Australian measurements (I am always confused when I am asked to measure butter by cups rather than grams) so I will put the one I usually use here. It is not my favourite recipe so I often put in a couple of spoons of cocoa to make it a chocolate cake

Cream butter and vanilla, add sugar and beat til light and fluffy. Add eggs one at a time. Stir in half flour and half milk, then other half of flour and milk. Only stir lightly. Spoon batter into a greased and lined cake tin – if you use a 20 cm tin it should take 50 minutes to cook in a 180C oven, but test with a skewer to check it is done. The Women’s Weekly give different times for different size cake tins, depending on the shape of the cake.

Of course, even without this recipe, Fran made a nice cake which, when the paper was peeled off, looked a perfect shape. She also had to make a few little cakes – I think we needed about 7. Our first task was to cut away some small bits from the sides of the large cake to shape the head, and then to place the little cakes to make the ears. It wasn’t perfect but looked ok (see my photo).

Then it was a matter of icing it all over with blue icing. Fran had bought some gel icing tubes for another cake. I’ve never used these before and was curious. They are useful for quite small amounts of icing but don’t seem to dry which I think is not so practical for cakes that have to travel (as mine often do) or sit around for some time (as this cake did). But they were quite good for shaping the nose. Fran thought it was an easy cake and it wasn’t hard but it was time consuming to ice around the edges of the ears. I made the mistake of thinning the icing a little to make it easier to spread but unfortunately it sort of pooled on the tray on which the cake was sitting which displeased me.

For the patches on the ears, I started with putting some black into a blue icing mix and it went a muddy colour so I threw it out and started again, this time with a darker blue I have in my icing colours which worked much better. We used marshmallows with a little black gel icing for the 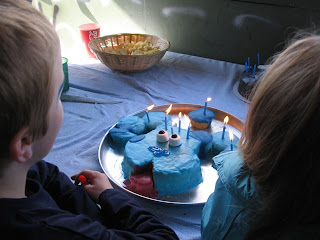 eyes (and used a teeny bit of icing to stick the eyes on). For the tongue, we cut out a wedge and place a pink iced wedge of little cake in there.

We were pleased with the cake – it is so easy to please kids with a bit of colour and novelty. The adults seemed to like it too. But I have to give a special mention to my mum who made a marshmallow slice for the party in advance, even though on the day she was visiting a remote Aboriginal community near Alice Springs – now that is dedication! (And an honorary mention goes to my dad and niece, Maddy, who navigated all sorts of road blocks for Melbourne University’s open day to bring the slice to the party.)
Posted by Johanna GGG at 08:35