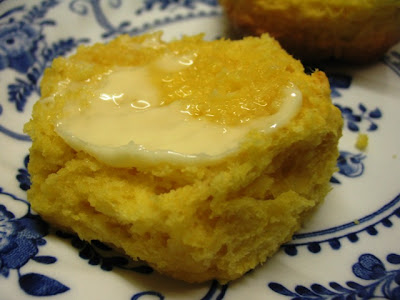 This month Johanna at the Passionate Cook is hosting Sugar High Friday, and the theme is Going Local (check out the round up). She asks us to consider local or regional food that we might make.

So I have been racking my brains for food that is particularly local to Melbourne or even our state of Victoria. I’ve looked in local histories, searched the net, had some discussions and come up with slim pickings. Will suggested peach melba because Dame Nellie Melba, after whom the dish was named, actually named herself after Melbourne. But ‘tis not the season for such summery delights! I have come up with Rowntree Hoadley’s violet crumble chocolate bar which we used to buy my dad each Christmas. But this is really a brand name for chocolate covered honeycomb. Then there are local cheeses such as the one which I ate as a child from our nearby town, Colac. It is all very unsatisfactory. 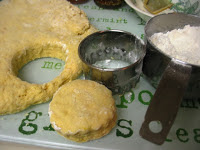 This type of exercise is likely to bring me out in a bad case of cultural cringe. But as a lover and defender of Australian history, I want to explain to Johanna that the development of our food culture is quite different due to the immigrant nature of my more immediate ancestors. (I wont talk about our Indigenous populations except to say that they have had very little influence on what I eat.) Johanna comes from Austria where communities lived in the same local area for centuries with travel being difficult and infrequent, and food specialities could develop slowly. Whereas in Australia people moved about a lot.

I can illustrate this with the story of my great great grandfather whom came to Australia from Wales in circa 1859. He originally came to Clunes, a gold mining town in Victoria, and then went in search of gold to Coolgardie (WA) over the other side of Australia where he died. But his children returned to Clunes and then to Melbourne. Not only would they have brought food culture from the home country but the amount of travel meant people swapping food ideas over great distances around Australia, rather than food cultures developing in discreet regions. 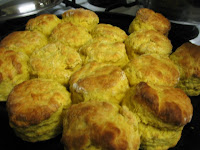 Given this history, it seems quite reasonable to me that we don’t have so much regional or local food culture. But we do have a fine national food culture, often created through the fusion of ideas from a home country which are then adjusted to the local conditions. I heard a great example of this on the radio recently, where an Australian whiskey maker explained that our climate means it takes 5 years to age a whiskey which in Scotland will take 10 years to age!

‘Australian’ cuisine, rather than being regional, is often divided up by descent. My family is very anglo celtic and has quite a different diet to – for example – those of Vietnamese or Macedonian descent. Many fine sweet foods, peculiar to Australia (or maybe Australia and New Zealand), were part of my childhood – lamingtons, pavlova, jelly cakes, anzac biscuits and pumpkin scones. Pumpkin scones are a fine example of adapting to local conditions. Scones are very British (but in the UK you never would have your brother requesting scones with vegemite and cream – yes it happened!) and someone in Australia (long before Flo Bjelke Petersen) came up with the excellent idea of adding pumpkin. As I have commented before, pumpkin is readily available in Australia and a staple part of my diet. It adds a sweetness and moisture to scones that is a delight to behold.

I know the Sugar High Friday event is about sweet food, but one of the great things about pumpkin scones, is that like their plainer cousins, they are great for either savoury or sweet food. I served them with pea soup but we also had them for dessert with blueberry jam. However you serve them they are delicious. 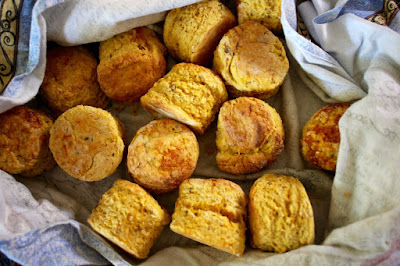 I used a recipe which was among the first recipes I baked when I first moved into a share house – a great home comfort. When I cooked the pumpkin the previous night I sort of forgot about it and it was the traditionally badly overcooked vegetables that fall apart at the sight of a fork – almost caramelized. So to compensate I only used 1 tablespoon sugar but usually use the 2 tablespoons the recipe requires. There are variations on this recipe with dates or sultanas but I think this is the best.

Update July 2010: made these again with (unseasoned) roast pumpkin and they were wonderful as always. Sylvia loves them which is pleasing because she will not eat mashed or roast pumpkin but I have ways of making her eat one of my favourite vegetables. Just as well because these are regularly appearing out of our oven, especially when we have company.

Update June 2017: made these vegan.  I used half and half white/wholemeal flour, used roasted pumpkin, substituted 1 tbsp flaxmeal and 3 tbsp water for the egg, and soured the milk with some vinegar or lemon juice.  They turned out really well.

Cream butter and sugar. Mix in pumpkin (I have done this with hot pumpkin but it seems a waste of time creaming the butter and sugar if you do because it just melts the butter. It is better if the pumpkin is cooled – don’t worry if the mixture looks a little curdled when you add the cooled pumpkin – mine never seems to mix in too smoothly but it is fine when the flour is added). Slowly mix in the milk and egg. Sift flour and stir into the mixture ad stir into the dough. (Sifting is well and good but I never do!)

Lightly knead and roll out 2-3cm thick on a lightly floured surface. Use a scone cutter (or if you want to be traditional, a vegemite glass!) dipped in flour to cut out scones. Roll out any scrapes of dough and cut more scones til no dough is left. Place on a baking tray. I like doing them close together so they all join up and have to be broken apart but you can space them out if you prefer.

Brush scones with milk and egg yolk (or just milk which is what I usually do). Bake in preheated oven 15-20 minutes or until golden brown.

On the Stereo:
Wonderland soundtrack: Michael Nyman
Posted by Johanna GGG at 20:21