Rumbledethumps: death to the red hag! 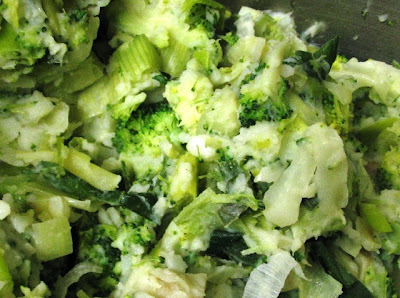 Yesterday I was surfing the net for inspiration for making dinner. I fancied mashed potato and was vaguely looking for a shepherd’s pie recipe when I found one for a dish called Rumbledethumps on the Moosewood Restaurant website. How could anyone resist a recipe with a great name and a great story!

It is actually a version of a dish better known to me as Colcannon which has cabbage and mashed potato mixed together. But this dish has many more greens plus some cheese. It was a pleasing accompaniment to some sausage rolls from the freezer (see below for other leftover recommendations).

Plus when we sat down to eat, I had story to tell about dinner. The Moosewood folk introduce rumbledethumps as a variation on 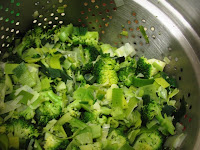 colcannon – a dish traditionally eaten at the feast of Lugnasa (apparently it was a taboo to eat potatoes before then) – ‘All the members of the family must share the dish or risk offending the agricultural spirit that protects the crop. After the first bite everyone shouts, “Death to the Red Hag!” thus driving away the spectre of starvation.’

Having had friends, as a child, with a print of the Potato Eaters by Van Gogh in their living room, I have a pretty good picture in my head of a dark grim cottage full of peasant folk, all yelling ‘Death to the Red Hag!’ I had thought it might be fun to yell as we started eating but the food was too good and distracted me. It is probably a sign of our abundance of food that I don’t feel any threat of the spectre of starvation.

But I do live with a Scottish partner who, unlike me, had heard of Lugnasa. He was even able to tell me that it is celebrated at the start of August and in Scotland they call it Lammas. So I had a 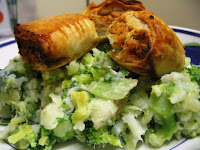 search around Wiki and E, of course, is right. It is a celebration of the harvest, also called the ‘feast of first fruits’. (Check the links for more info from Wiki.) My one main disappointment was that although my timing seemed so right in making this dish early in August, being in the Southern Hemisphere means I should celebrate it at the start of February!

Here is the recipe. This is delicious and quick dish that is a great way of getting your starches and greens in your diet. It is so easy I barely looked at the recipe as I made it.I think it would go well with lots of nutloaves, burgers, bean casseroles. On the first night I made this I served it with sausage rolls from the freezer. The second night I heated the leftovers with extra grated cheese on top for 30 minutes at 180C and then put under the grill for a few minutes til the cheese was brown and crisp - I served it with more sausage rolls and leftover blackbean and apricot chilli non carne. The third night I made patties, brushed them with oil and put them under the grill - they were delicious with my orange soup revamped with some lentils and dried apricots.

Boil potatoes for 15-30 minutes. I did mine for 30 minutes because I had the vegetables steaming on top of them and it was too awkward to take them out from below the steaming basket. Mash the potatoes with butter and milk. (I left the potato skin on and didn’t bother 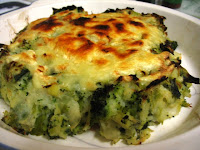 about the potato being a bit chunky rather than smooth – this didn’t matter once everything was mixed.) Mix with remaining ingredients.

The recipe actually says to spread into a large baking pan and sprinkle with cheese and place under grill to brown which was great the second night, but I think you could get by without adding the cheese, if you lack the time or energy. I added it to the mix but it didn't make heaps of difference. It would be easy to veganise by using dairy free margarine and milk, and leave out the cheese.

On the stereo:
The milk-eyed mender: Joanna Newsome
Posted by Johanna GGG at 21:50