ACMI Café – sweet but no sourdough! 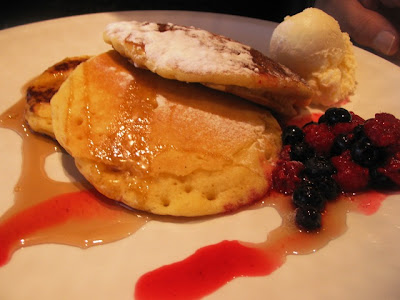 Last weekend, E and I met my dad at 10am on Saturday for brunch at the ACMI café. It was early for us – but my dad had 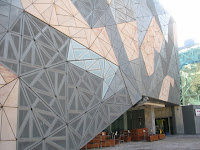 already had breakfast (especially early to see my mum off before she left at 6am for the airport to fly to Alice Springs), purchased a new car and a few CDs.

So my dad went for the ricotta pancakes with berries and icecream for his second breakfast (for anyone not familiar with second breakfasts, check out the Scottish hobbit in the Lord of the Rings film – can’t remember which of the trilogy but the idea delighted E and has stuck with us).

I have had the rustic baked bean before and decided to go with these again, and a couple of hash 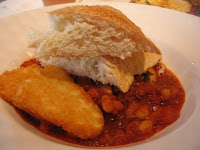 browns. I toyed with the idea of some other veggie but I know the beans are homemade with lots of tomato in them and I didn’t feel like any of the other veggies on offer. E went for the big brekkie!

I think my dad hit the jackpot. He was most pleased with his and when I had a taste I wished I had ordered the pancakes. E liked his but it was a bit big (well they don’t call it the big brekkie for nothing!). Mine was nice but the beans were bit intensely tomatoey. In fact, I think what I didn’t like so much this time was that I was served Turkish bread rather than the sourdough which was on the menu. The 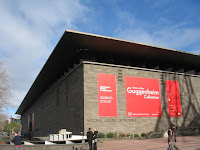 beans needed a more substantial bread. But the hash browns were wonderful and crisp, so no complaints there, except why can’t they be healthier!

All in all, a very pleasing brunch before we headed off for the Guggenheim exhibition at the National Gallery of Victoria. (A modern art exhibition is quite fitting really for a morning spent in some of the fine modern buildings of Melbourne.)