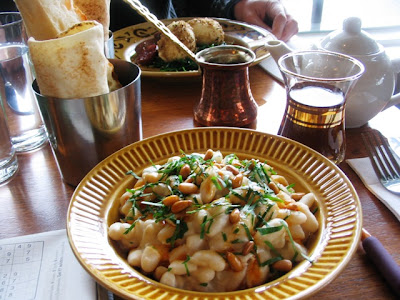 Serendipity is a wonderful thing. E and I found ourselves in East Brunswick end of Lygon Street seeking brunch yesterday morning. My first choice, Sugardough, was too busy as usual but I did come away with a loaf of bread. Rumi was the fourth place we went to.

I have long wanted to visit Rumi which has had wonderful reviews (here and here). But I have also heard it is very busy in evenings. So I was surprised to see it both open for breakfast and looking almost empty (although it did fill up as we sat there). Fortunately, E gave up his vision of porridge for something more exotic.

The breakfast menu is a middle eastern take on the usual fry-up, baked beans and toast. I was tempted by the Turkish breakfast of tomato, cucumber, fetta and olives. It took me back to a trip to Turkey and the breakfasts we had there. In particular, I remember one hostel in Cappadocia towards the end of my trip where I flippantly said to the owner that I wasn’t going to spend any more money before I left and he kindly presented me with a generous plate of tomato, cucumber, fetta, olives and bread – free of charge. He then went off into town and asked me to deal with any enquiries, which worried me because the only Turkish word I knew was Merhaba (hello).

E said it wasn’t the weather for a cold breakfast, and I was also tempted by a dish of white beans with tahini, parsley, pinenuts 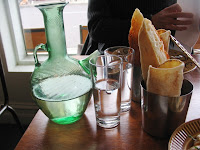 and paprika oil, so I chose that. The waitress was quite happy to take out the eggs. It was served with wonderfully fresh pitta bread and Turkish bread, and was like a creamy Middle Eastern version of baked beans. It was delicious but I couldn’t finish it because it was quite rich and I think next time I would ask for some tomato and cucumber on the side. E ordered deep fried eggs with dukkah, spinach and sausage which he said was one of the most unusual breakfasts he had ever had – and he highly recommended it.

We were also pleased with our drinks. The woman at the next table asked for a cappuccino and was kindly told they didn’t serve them. It is not the place for your usual coffees and teas, but if you are willing to try something different you will be rewarded.

E had Lebanese coffee laced with cardamom. It came in a little brass pot with a long handle to pour it into the small cup. I had Turkish apple tea which came in a teapot with a little hour glass shaped glass to pour it into. I had been tempted by a cold drink but was glad I decided on the apple tea. In Turkey, this sweet hot drink was served in these glasses in many cafes and carpet 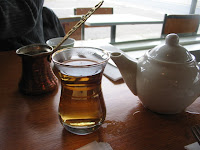 shops. I loved it as an alternative to tea or coffee, despite being told by my brother and sister (who lived in Istanbul at the time) that only tourists drank apple tea. Rumi’s apple tea wasn’t quite a sweet as I remember, and had a pleasing tartness.

The café is elegantly simple. White walls with the interior walls decorated with lines of Arabic writing. We sat overlooking large windows which were great for people watching. I also liked the small touches of bluestone surrounding the doorway, and a wooden panelled ceiling which avoided whitewashing the historic feel of the old terraced building. And at the counter is a very tempting display of Middle Eastern sweet treats such as halva, Turkish delight and baklava. With friendly waiting staff in a chartreuse green aprons, the ambience just added to the good feelings about our food.

Lastly, a comment on photography in cafes. I have been to a few places recently which I haven’t blogged due to it being difficult to take photos either because it was too dark or too awkward or because I forgot the camera. So I felt a little self-conscious when I took out my camera to photograph my breakfast and the people at the next table turned around to talk about what we had ordered. But I am always curious about what others order, and these people seemed to have a long wait for their friend before they ordered so I hope some vicarious enjoyment of the food helped their time pass.

Update March 2008I have eaten dinner at Rumi a couple of times in the last few months and highly recommend it. After the first visit, I was tempted to try making the Carrots with Dukkah and Tahini. The second visit, the group I was with chose to have a banquet and I was impressed that they made a vegetarian version of every dish on the banquet menu. As with our breakfasts, the food is cooked just right and the dishes are innovative. But I have been told that they no longer serve breakfasts.