Bones and blood, Monster doughnuts, and Halloween - not for the faint hearted 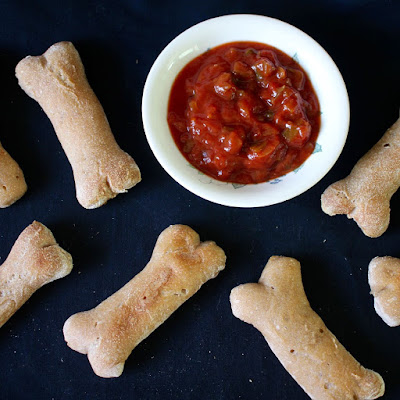 I've been making Halloween food for a few years and every year have wanted to make bones and blood.  There is so much sweet food at Halloween that I always am attracted to savoury ideas.  Fair suck of the sauce bottle!  However I do question my feelings that it is a fun thing to make 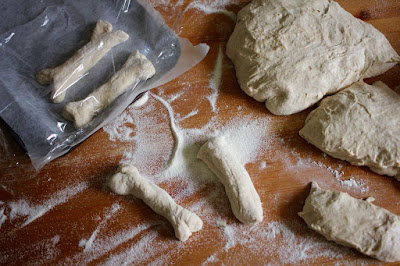 And when I say perhaps it is not as fun as I would like to think, I don't mean that it is not really that much fun to spend over an hour on a Saturday morning shaping sourdough bread dough into bones.  I mean the unease - which is always brought on by Halloween - at finding death is fun.

It is all the more sharply felt by me given that we usually have some Halloween based food for my daughter around this time of year at a lunch to remember my stillborn twin boys' birthday.  It seems more natural to me to celebrate that which was once called All Hallows Eve as a day when we are closest to the dead than it does to take lolies from strangers (aka trick or treat).  It would be enough to at least be able to acknowledge that death and grief are complicated to deal with.  It does not make sense to be happy and sad at the same time.  So we stick to the simple and straightforward. 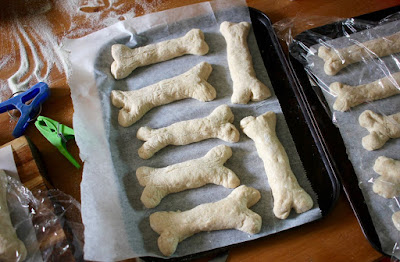 So it does seem odd to make bones and blood which I associate either with horror movies or medical tv shows.  I never understand why people find horror movies so entertaining.  And I find the bones and blood in medical dramas make me squeamish.  But I love playing with bread dough.  And it has become part of our tradition of remembering our sons anniversary that we make Halloween food. 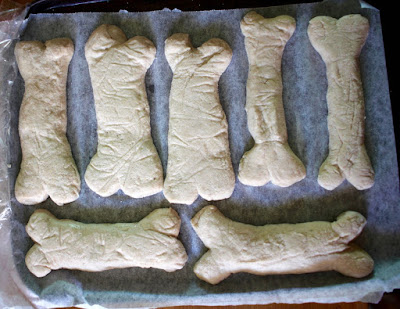 Halloween ranting aside, making the bones made me remember why I had never made them before.  They took quite a while to shape on Saturday morning.  I had decided to shape my overnight sougdough dough the day before, let them rise 30 minutes and then put them in the freezer.  When they came out they were much flatter than they had been when they went in.  I really wanted to spend another hour or so shaping and rising but by then I was too rushed for time.  I did try and plum them up a little so they weren't so flat. 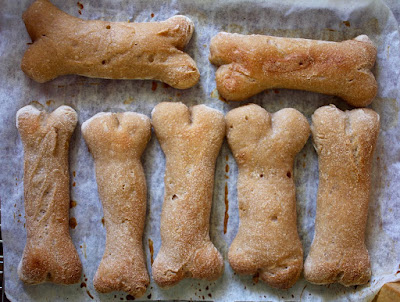 I made some plain and some with parmesan cheese grated on top.  Both tasted really good.  The plain ones looked more like real bones.  "They are like dog bones", my mum said.  (That is because she has owned lots of dogs, not because she is familiar with dead dogs!)   I had meant to make a cheese dough but forgot in my tiredness on Friday after work. 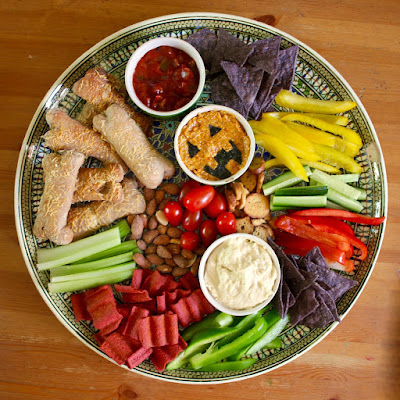 As always I was fairly over ambitious about the amount of food I could make and by the time guests arrived, I was finishing the arrangement of this platter of food, including the bread bones and salsa blood.  I really loved the beetroot sweet chilli chips and blue corn chips on the platter.  Sylvia insisted on cutting out the nori face for the pumpkin dip.  Everyone enjoyed the bones/ 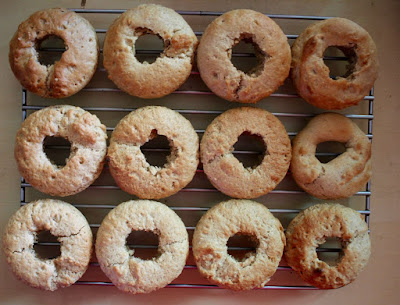 Sylvia's main focus of the Halloween food had been making monster doughnuts that she had seen on Pinterest.  Of course ours were different to the online pictures, but itsn't that life!  We baked the quick doughnut dough that I had trialled last weekend.  I used our doughnut moulds but found that they rose too much and I had to cut out the holes. 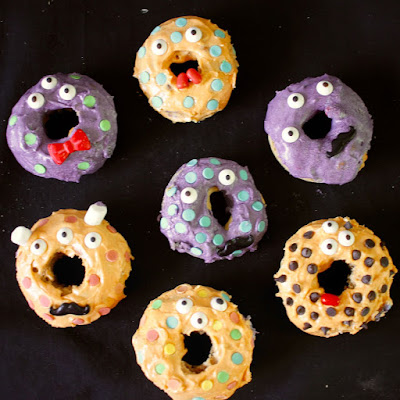 Sylvia just was so happy making these doughnuts.  And a little frustrated when they were not quite as she expected.  The supermarket sold eyes in packs with moustaches and bowties so she had decided they all needed moustaches.  We split up the doughnuts and experimented with dfferent styles and had fun.  The doughnuts tasted really light and were lovely with icing on them (last time they had cinnamon sugar.) 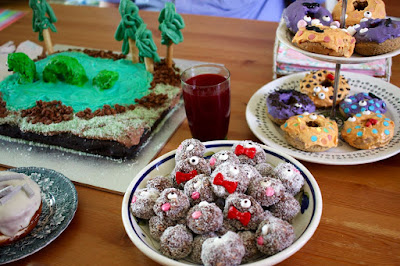 I also made grubs because I love them and had promised Sylvia she could help me make them.  She wanted to decorate them with the leftover face parts after we had decorated the doughnuts. And a cake with doughnut decoration (more about that later).  Friends brought along a beetroot juice mix which looked quite like blood.

My mum brought along a couple of doughnuts from Uncle Donut in Geelong.  Above, you can see part of the "Elton Mess John" (Raspberry and rhubarb, vanilla buttercream and charcoal meringue.)  I was keen to try the different doughnuts and preferred the yeastier ones from Uncle Donut.  It was a great chance to try and work out what makes a doughnut different from a cake (or bread).  This is a mystery I have been trying to solve lately. 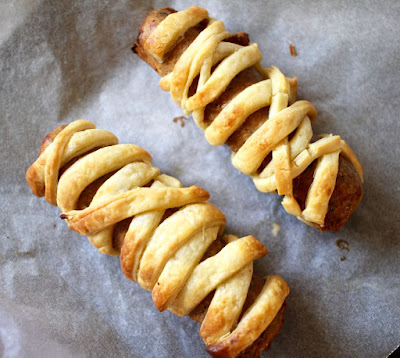 I had meant to make sausage mummies for the lunch but ran out of time.  I promised Sylvia I would make them for dinner.  They had been her request after all.  After the lunch I was very full.  My niece loved the grubs and took quite a few home.  A few doughnuts were put into sylvia's Halloween take home bags.  I gave some of the cake to my mum and put some of it in the freezer.  But Sylvia was determined to have a mummy for tea.  I made one for her and one for E and I to share.  They were pretty easy to make and crisped up with 20 minutes at 220 C.  I have promised to make more tomorrow night.  Given how easy and delicious they were, I think I can cope. 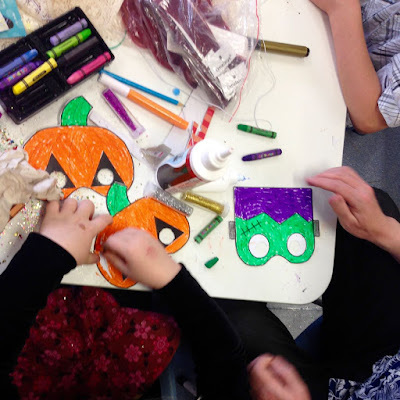 Above is a picture of Sylvia and E making Halloween masks at a community house on Saturday.  There are no pictures of leftover bones but I can assure you they were all gone by the end of the day.  I took some to work with vegies and hummus.  They were a bit tough by then.  As I sat in my office in the afternoon chewing on a bone, it occurred to me that it is very rare that a vegetatrian can do such a thing.  Sylvia told me after school that her bone was stale but her brain was soft, which made me laugh.  She had shaped one bit of dough to look like a brain.  Maybe that is an idea for next Halloween.  Meanwhile I am looking forward to more adventures with bread dough.

About an hour before going to bed (or first thing in the morning) mix everything together.  It is easiest to mix everything except flour first and then add flour.  Use hands to mix if required.  Set aside covered with a tea towel for half an hour.  Knead in the bowl for about 1 minute.  Cover with greased clingwrap and leave at room temperature for 8 to 12 hours.

Scrape dough out onto a semolina floured board.  Cut dough into 24 pieces (I did 12 and cut each in half once rolled into a sausage)  Use some flour on your hands and the surface if the dough is sticky.  Roll each piece into a sausage and push the ends in to shape like dumbells with a little blob on each end.  Snip the blob with scissors (about 0.5-1cm) and pull apart each end to shape like a bone so the ends are rounded rather than blunt.  Place on baking paper lined trays.  Cover and leave to rise for 30 minutes.

Preheat oven to 220 C.  If desired, sprinkle bones with cheese.  Cover bones with foil or a lid.  Bake for 20 minutes.  Remove foil and bake another 10-15 minutes until just turning golden. Cool on a wire rack.  Serve with tomato salsa or sauce for the bones and blood experience.  Also good with other dips or just by themselves as snacks.  Best eaten on the day of baking.

NOTES: you could try this with your favourite bread dough as long as it is not too sticky.  Though I did find it good to have this dough a little on the sticky side as it sat uncovered while I shaped the dough - which took over an hour.   I froze mine after they rose but they were a bit flat when they came out of the freezer the next day and ever with a bit of extra shaping, lost their plumpness.  It was better to freeze them though so that I could serve them on the same day of baking. I baked my bone for 15 minutes after the foil was removed but I think 10 might have been enough.  I used half while spelt flour and half regular white wheat flour but all white wheat flour is fine.