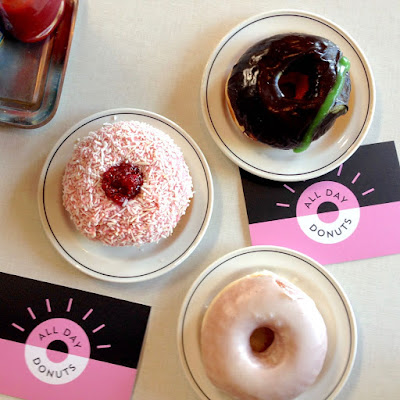 It's been the sort of week that requires doughnuts.  I had been promising Sylvia I would take her to All Day Doughnuts in Brunswick.  So Monday we finally visited this fascinating little cafe that shares space with Juanita Peaches that served what E described as "dude food".  Both served up excellent food. 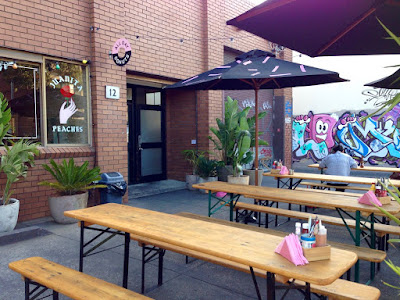 The building is unassuming but excels in the simplicity of design.  There is a choice of picnic style tables out of the front or laminex tables indoors.  A few plants, some condiments and cutlery.  Umbrellas match the All Day Doughnuts design.  The service is friendly and fast.  Sylvia enjoyed the hip hop music. 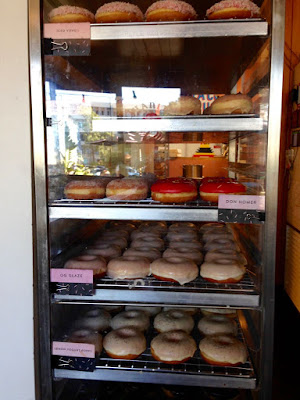 We were initially there for the doughnuts so we were drawn to the display.  I was quite amused by the pink sprinkled Don Homer doughnuts.  But chocolate is my thing!  So I ordered the choc fudge with mint chew doughnut.  The fudge icing was thick, rich and excellent.  E chose an OG Original which was too simple, too vanilla and too sugary for me but he loved it.  Sylvia chose the Iced Vovo.  It lacked the marshmallow that iced vovo biscuits have but it did an excellent job with the pink iced coconut topping with a blob of wonderful fruity home made berry jam in the middle.  And the doughnuts taste fresh too. 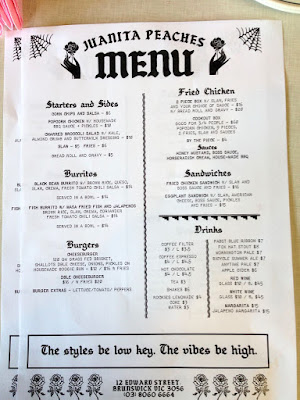 I can never resist reading a menu and was quite tempted by the Juanita Peaches menu.  E was wary but prepared to try to it.  He found it rather limited.  The reason for this could be seen out in the back of the warehouse where the Taco Truck and Beatbox Kitchen Truck were passed.  Both All Day Doughnuts and Juanita Peaches are run  in the same cafe by Raph Rashid who is a Melbourne food truck pioneer.  He keeps his menu short and his quality high. 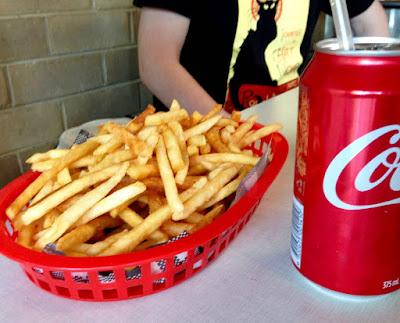 Sylvia had the fries which for $6 was a very generous serve of shoe strings.  And excellent crispy hot fries.  E ordered the burger and declared it to be one of the best burgers he had ever had.  He was glad he hadn't ordered the fries on the side as there were plenty on Sylvia's bowl for him to share. 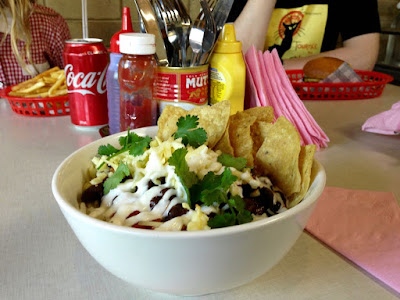 I had wanted to try the Black Bean Burrito Bowl.  (I prefer not to have mine wrapped in a tortilla.)  The black beans, brown rice, queso, slaw, crema, and fresh tomato chili salsa were served with satisfyingly thick, crunchy corn chips.  I really loved it.  It felt healthy and honest with lots of vegies and protein.  It was quite spicy for me but not uncomfortably so.  Like the fries, it was very filling.  And at $14 was much cheaper and pleasing than the $24 lasagna I had eaten earlier at a work lunch. 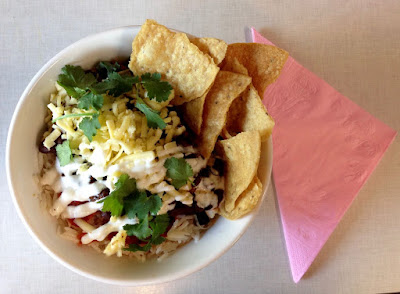 It was, as E had said, dude food, but high quality dude food.  I also was quite curious to try the Charred Broccoli Salad with kale, almond crumb and buttermilk dressing.  The eggplant sandwich with slaw, cheese, boss sauce, pickles and fries also sounded good.  So I have a few dishes to return and try. 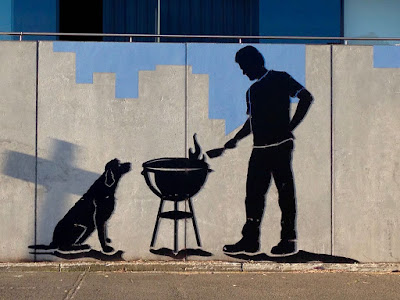 As we left I noticed some art on the flats opposite us.  It represented traditional Aussie backyards with a BBQ, a dog, a kid swinging on the Hills Hoist clothes line and people playing backyard cricket.  Quite ironic given that the inhabitants do not have any backyards for such pastimes.  That is modern Australia.  As are All Day Doughnuts and Juanita Peaches.