Baked doughnuts with baking powder (vegan) and a Sundae 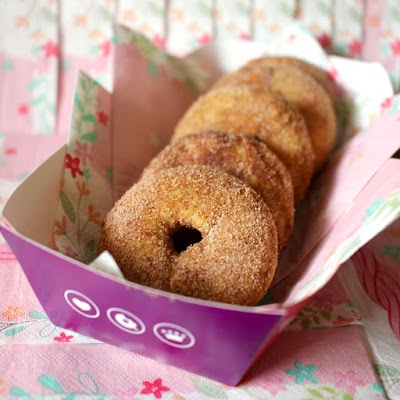 So we are currently on a doughnut bender.  Sylvia and E can't get enough of eating doughnuts.  While they have never been a favourite of mine, I am quite interested in trying different recipes.  Now that I have mastered baked overnight sourdough doughnuts, I wanted to try a recipe that relied on baking powder rather than yeast.  I was really impressed with how these turned out when rolled in butter and cinnamon sugar. 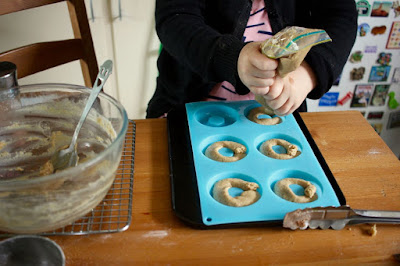 After a fruitless search for a doughnut cake tin in the shops, we finally bought one online.  So I was looking for a recipe that was soft enough to sit in the mould rather being rolled out.  We used a ziplock bag to pipe them into the moulds.  Sylvia turned out to be a whizz at piping. 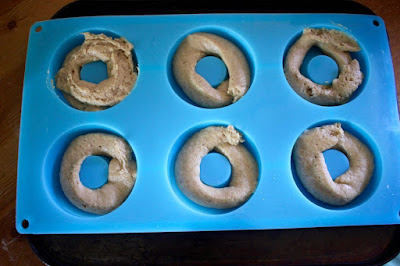 The doughnut tins seemed to work quite well.  The recipe I found was vegan and used aquafaba. instead of egg  I have found that even with aquafaba that vegan recipes can be more fragile than those made with egg.  When these came out of the oven and we tossed them in melted butter and cinnamon sugar (made by Sylvia so I could not put quantities in the recipe notes below but I think she was quite generous with the cinnamon), we had a few casualties.  Not really a problem.  It was good to be able to taste them.  And they were really good warm.  I was surprised at how light and fluffy they were.  But I think they were more doughnut than cake. 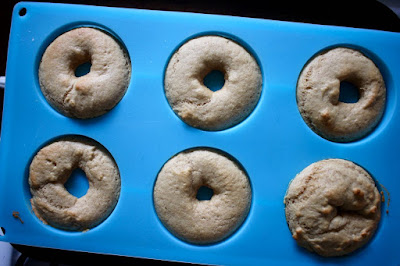 I halved the recipe I was following because it said it made 20 mini doughnuts.  Our half batch made 14 of our doughnuts.  Which meant a few batches in the oven and kicking myself at not buying two of the doughnut tins.  I baked the last two in muffin tins with foil in the middle (see the pictures of Lucy's doughnuts).  It worked but the moulds were much easier. 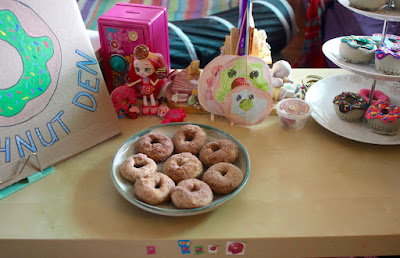 I was very pleased with the first batch of baking powder doughnuts.  But I had more than I had planned.  One thing I am not so keen about with doughnuts is that they are best eaten on the day of making.  Sylvia helped out by offering doughnuts to some of our neighbours.  Some were kept for the next day and made rather good lunchbox treats. 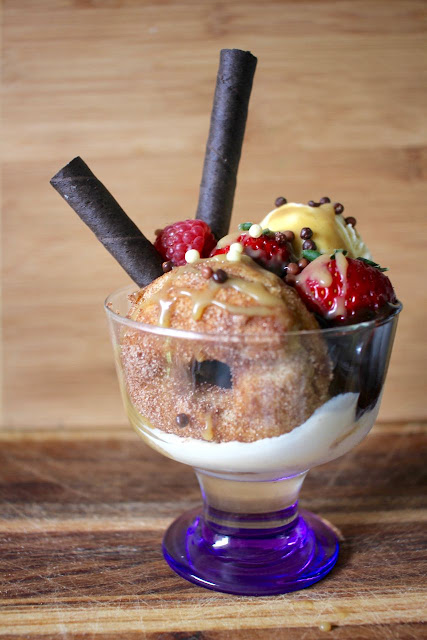 One of the reasons we decided to make doughnuts was to satisfy Sylvia's desire to make sundaes.  She had decided to do this a few months back but I was too sick to entertain the idea.  And we had a little jar of salted caramel sauce from a school cake stall.  A friend at book club introduced me to a chocolate sauce and strawberry combo which went in too.  We bought salted caramel ice cream and chocolate wafer sticks at the supermarket and used some chocolate sprinkles.

It was outrageously decadent but lots of good fun.  The ice cream was a bit soft and so keen to melt it would not wait for a photo.  It definitely made these doughnuts a baking day to remember.  I suspect we will return to the doughnut recipe soon but not the sundae.  There is only so much decadence we need in our lives.

I am sending these doughnuts to Baking Crumbs and Treat Petite.  The sundae goes to We Should Cocoa.

Preheat oven to 220 C.  Mix dry ingredients in a medium-large bowl.  Melt butter and lightly whisk in the milk and aquafaba.  Gently stir into dry ingredients.  Spoon or pipe into doughnut pans.  Bake for 7-10 minutes until just turning golden brown.  Leave 5 minutes in tin and then gently turn out (they are quite fragile when warm.)  These are best eaten fresh but can be eaten the next day.

NOTES: If you want these to be vegan, use dairy free margarine, milk and aquafaba (the liquid drained from a tin of chickpeas).  I did this with soy milk and nuttalex.  However they would also work with butter, dairy milk and 1 egg instead of aquafaba.  We used a ziplock bag to pipe the doughnuts into our silicone doughnut tins (snipping the end off the bag once it was filled).  When they were warm, we tossed them in melted margarine (about a dessertspoon melted for each 6 doughnuts) and tossed them in a mixture of castor sugar and cinnamon.

Spoon a few balls of ice cream into a bowl.  Top with doughnut.  Drizzle with caramel and chocolate sauces.  Dot with berries and balls.  Poke a couple of chocolate wafers in and eat before the ice cream melts.  It is best to have ice cream that is frozen quite solid rather than soft.

On the stereo:
Hal David and Burt Bacharach: the Songbook Collection: Various Artists
Posted by Johanna GGG at 21:53