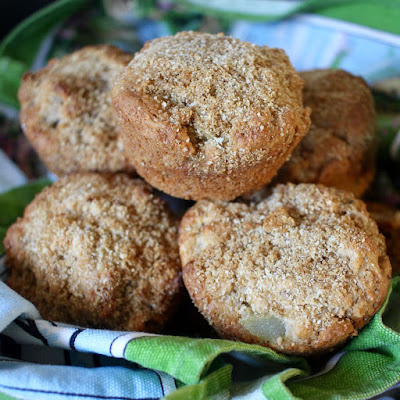 Before heading off on holiday about a week ago, I baked instead of packing.  Having my baking mojo alive and well, I spied some rapidly ripening pears and decided to make muffins when E took Sylvia to the library.  They were so good I wondered why I don't bake with pears more often.  I love Packham pears but don't always eat them all while they are pleasingly crunchy. 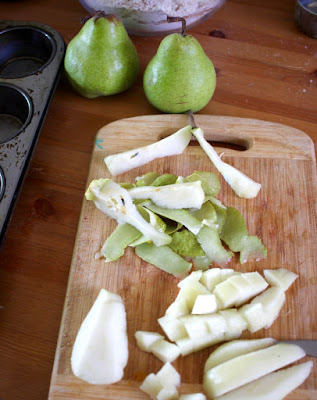 Actually I can tell you one thing I find difficult with pear recipes.  Most recipes don't say whether they mean for pears to be quite firm or quite soft or in between.  It always confuses me as to whether my pears are the right ripeness.  Especially as I like to eat them quite crunchy.  However I have decided that people usually bake with pears once they are getting soft and need to be used up so that must be what recipes require.  Any advice on this is welcome.

Back to my idea to make pear muffins.  At first I was determined to make Karen's savoury pear walnut and goats cheese muffins at Lavender and Lovage.  Then I found I didn't have enough walnuts.  Back to the drawing board!  I found a simple sweet pear muffin recipe instead. 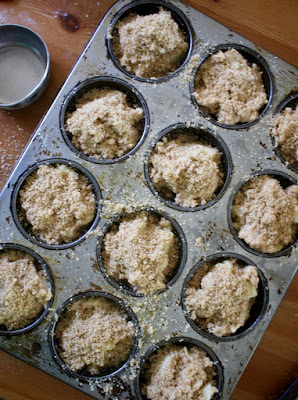 The muffins were just lovely.   When they were warm out of the oven I took a plate of them out to E and Sylvia.  E said he could only eat half one but he ate a whole and praised them.  Sylvia who had got home in time to sprinkle the almond meal and sugar on top, pulled out all the chunks of pear.  (Grrr.  I think she needed Veganopoulous's muffins with pear puree.)  I also gave a muffin to our neighbour who was looking after the cat while we were away.

We didn't end up taking many muffins away as we had plenty of food with us.  So they were neglected and I can report they don't last many days.  However a few muffins went into the freezer and I am looking forward to one for morning tea tomorrow to cheer me up about being back to work after our holiday.

Great a 12 hole muffin tin at preheat oven to 200 C.  If using flax egg mix 1 tbsp flax meal (linseed meal) and 3 tbsp water in a small bowl and set aside.  Mix flours, almond meal, sugar, cinnamon and pears in a medium to large mixing bowl.  Stir in milk, olive oil and egg (or flax egg).  Spoon into muffin tin.  Mix extra almond meal and brown sugar in small bowl.  Sprinkle over batter in muffin tin.  Bake for 20 to 25 minutes until golden brown and a skewer inserted in the middle comes out clean.  Cool on a wire rack.  Best eaten within a day or two.

NOTES: I used a flax egg and soy milk so these were vegan.  This and the low sugar content might be why they didn't last long but they were excellent fresh and good the next day.

On the Stereo:
The Best of the Radio Songs: The Church
Posted by Johanna GGG at 15:54