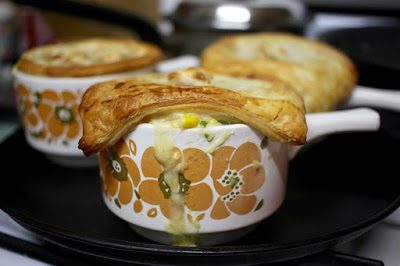 These pot pies were a result of a conversation to make sure these were child-friendly.  I saw an interesting idea for a creamy carrot and bean pot pie on Minimalist Eats.  While it appealed to me me, it seemed a bit sophisticated for kids.  So I had a chat to Sylvia to work out what vegies she would eat in a pot pie. 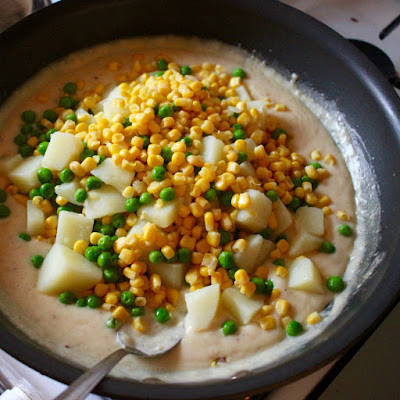 These are pot pies that reminds me of childhood comfort food.  It is interesting that the vegies she chose were ones that I had quite often as a child: potato, corn and carrots.  The cheese sauce is the one that my mum used to make for our regular cauliflower cheese.  And who doesn't love anything served under a blanket of pastry. 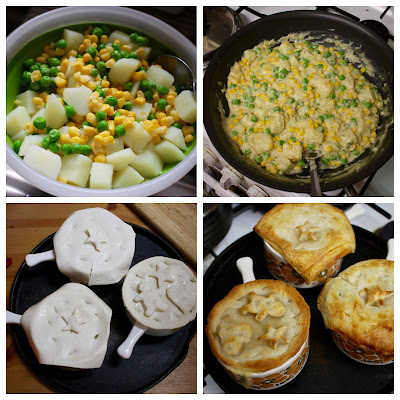 Actually I found that Sylvia wasn't so keen on the pastry on the pot pies.  She liked the filling but had to eat her pastry lid separately.  Yet it was a good meal to serve on the Friday that the school holidays started when Spring was just starting to show her head but the chill was still in the air.

I am sending these pies to Meat Free Mondays and Eat Your Greens.

Potato, corn and pea pot pies
An original Green Gourmet Giraffe recipe
Makes 3-4 depending on the size of your ramekins

Preheat oven to 220 C.  (If you haven't cooked the potatoes, do this while you make the cheese sauce.)

First make the cheese sauce.  Fry the butter and flour over medium heat a few minutes in a frypan or large sauce pan until it smells cooked and might have changed colour slightly.  Turn the heat to low and gradually stir in the milk.  Bring to the boil and mix in the seasoning, mustard, cheese, parsley and chives.  When the cheese melts, turns off the heat.  Gently stir in the corn, peas and potato.

Spoon mixture into ramekins.  Cover with pastry.  I just cut the pastry into quarters and let it hand over the edges of the ramekins for E and me.  Sylvia wanted to cut hers into a circle by tracing it on the ramekin (before the filling went in) and then we used some of the scraps to decorate the pastry.  Use a knife to make a few slits for the air to get out.  Bake about 20-30 minutes or until the pastry is golden brown.  These are really hot straight out of the oven so can do with sitting for 10-15 minutes.

NOTES: These could be made vegan by using vegan puff pastry, vegan butter, vegan milk and vegan cheese such as bio cheese.  Alternately you could use your favourite vegan cheese sauce.

On the stereo:
Born Sandy Devotional: The Triffids
Posted by Johanna GGG at 17:20