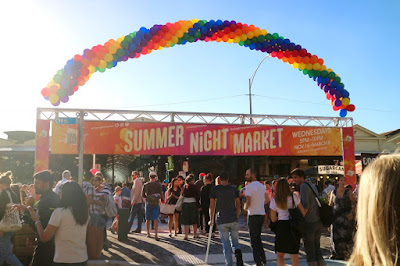 We often celebrate Burns Night at our place because E is Scottish.  But when I found that Sylvia would be at a sleepover and E at ukulele practice I decided to go the Queen Victoria Night Market for tea.  I find crowds so much easier to negotiate alone.  The vegetarian options were a tyranny of choice.  I looked for some unusual dishes to try but did return to some favourites. 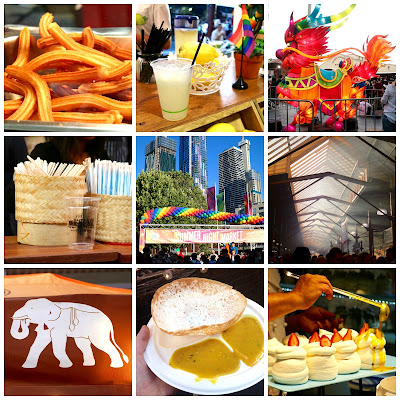 We love the Coburg Night Market 2016 that is held weekly in December.  It is the little sister of the night market at the sprawling Queen Victoria Market which is held from November to March on Wednesday evenings.  Actually only a few sheds are open during the night market.  Yet, there are still so many stalls that it is still overwhelming.  I focused mainly on the food stalls, with barely any energy left for the craft stalls. 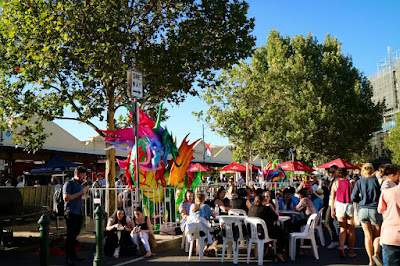 It must be about 10 years since I last went to the Queen Vic Night Market with my parents and siblings.  We found a table where we ate our tea all those years ago.  On this visit I did not like my chances of finding a seat.  There are many seats and even more bottoms searching for a place of rest.  I went with the street food vibe and ate on the go. 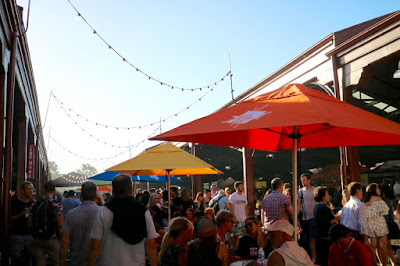 Firstly I wandered around to see every stall, which is far easier to do when alone.  While some of the stalls were the sort of dishes I am familiar with - such as paella, falafel, noodles, dumplings, cheese toasties and vegan curry - I was curious about some others. 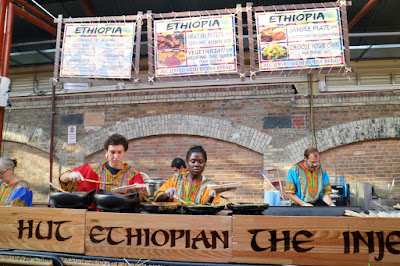 It was fun just checking out each menu.  (Usually Sylvia or E are keen to move along.)  I really loved the look of the stalls with the Victorian brickwork behind them.  I would have loved to try the following: 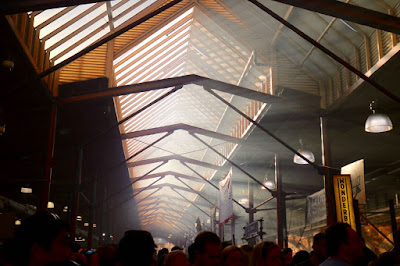 I was too full to try some of the above dishes, forgot about some and couldn't be bothered queuing for others.  I also decided to give Sylvia a call at her sleepover to see how she was going.  It took ages to make my way out of the shed.  It was incredibly busy.  I think I arrived about 6ish and it was already really busy and just got busier. 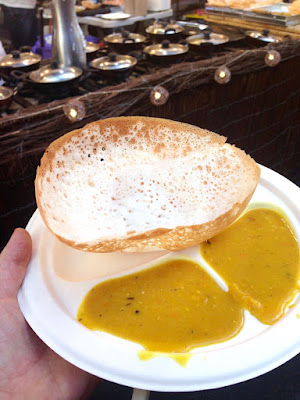 The first place I stopped to eat was the wonderfully named Devils and Hoppers.  I had never heard of hoppers before but Faye had been excited about them and she is always on the ball with interesting food.  According to Wikipedia they also go by the name Appam and are Sri Lankan rice pancakes cooked in a bowl shape.  I had a plain hopper with dal ($4).  I spooned it into my hopper and rolled it up.  This was delicious.  I wasn't at all interested in the egg filled hoppers but would have liked to try the string hoppers (which are made with egg but I was told they could be vegan) if the queue was not so long. 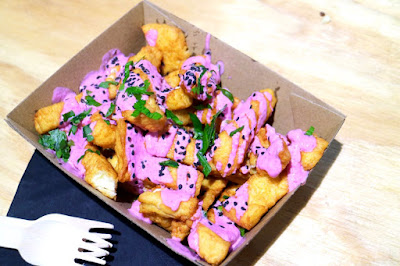 The next dish I tried was The Cypriot Kitchen's Haloumi Chips, served with sesame black seeds, fresh herbs and your coice of sweet yoghurt sauce or beetroot tzatziki ($10).  I queued for ages and enjoyed watching the nimble dance of the many busy staff around each other.  They made a great theatre of calling out numbers when dishes were ready.

Yet I was disappointed with my dish.  I think my expectations were a bit awry.  I had expected beetroot tzatziki that was chunky with lots of grated beetroot piled on the chips.  Instead it was a drizzle of light pink sauce.  The haloumi chips were really good but so salty that I could not eat many.  This was more of a side dish than I expected.  Good but I just couldn't even get through half of it. 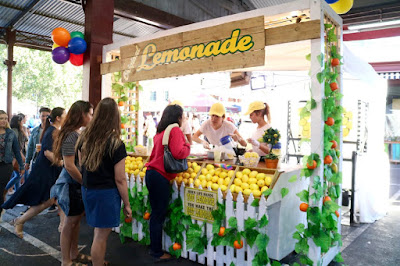 My mouth was so salty that I went gasping to the Lemonade stall for a cool refreshing glass.  It was so welcome that I almost went back for a second glass.  I asked where the lemons came from and they said local but when I asked where the staff didn't know.  I was curious as there seem to have been less local lemons and limes about lately. 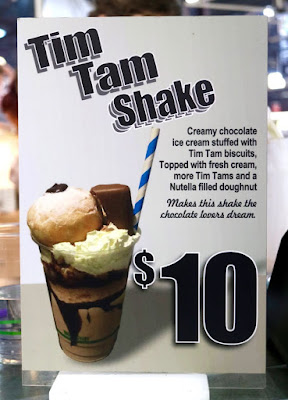 I loved looking at all the tempting desserts.  The pavolva stall with mini pavlovas and choose your own toppings seemed a great idea, if only I loved pavlova.  The New York waffles looked amazing as did the churros and the above Tim Tam Shake (Creamy chocolate ice cream stuffed with Tim Tam biscuits, topped with fresh cream, more Tim Tams and a Nutella Doughnut.  But why must they always douse these fancy shakes in cream! I was less enthused by the Dutch pancakes, Holy Cannoly and Mercato Gelati. 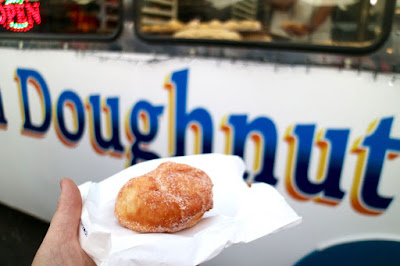 Instead of trying something new I went with my favourite Queen Vic comfort food; the jam doughnut from the American Doughnut Kitchen van.  I still think they are the bestest doughnuts ever and have such happy childhood memories of these doughnuts.  (Thanks to my dad for passing on that love!)

I remember in high school being taken by a friend's parents to the Queen Vic Market and having churros.  It was my first experience of churros.  I think until then I had not even realised they existed.  I liked them but they seemed so foreign and odd compared to the jam doughnuts that are one of my first culinary loves1 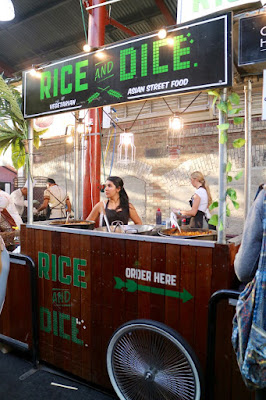 And then I was still peckish so I went to Rice and Dice.  It was hard to choose what to eat.  They have the amazing Indian nachos that I had at the Coburg Night Market late last year but I remember how filling they were.  Everything looked really good - the masala, the dumplings, the noodles. 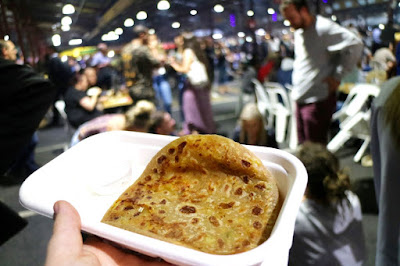 I went for the stuffed roti with curry vegetables.  It came with a yoghurt sauce and was delicious.  I had been worried that the curry vegetables would be drippy but they weren't at all.  They were a wee bit spicy but nothing to bother me too much. 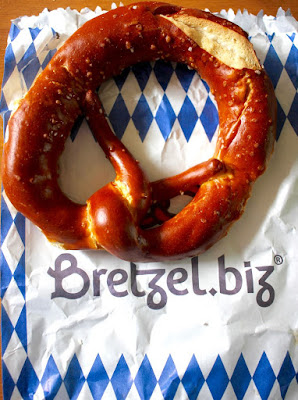 I also bought some Bretzel large soft pretzels to take home for the next day.  I think Sylvia and E might have liked a sweet one but I really love the plain salted ones.

There is lots more to see, especially lots of craft and clothes shops that I didn't get a chance to visit because it was too late by the time I finished checking out all the food,  I did notice that, like the food, there were a few familiar stalls from the Coburg Night Market.

There were lots of rainbow flags for Gay pride, some colourful dragons for Chinese New Year but nothing about Burns Night at the market.  And for that little bit of quirkiness, I passed a guitar paying Dark Vader busker on the way to take the tram home.  I'd love to get back to the Night Market but there are not many weeks left before it closes as the cooler weather comes to Melbourne.