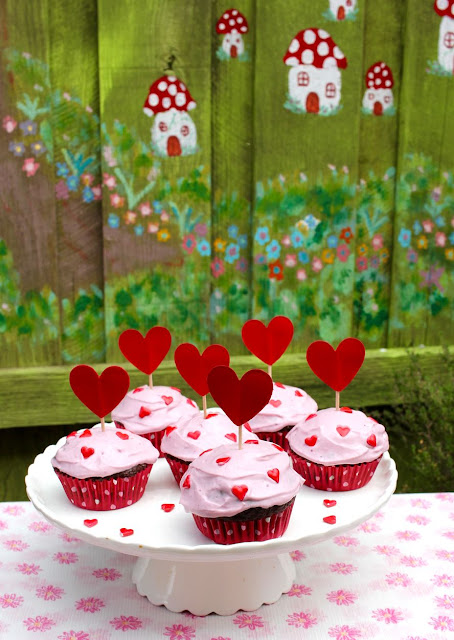 Some time before St Valentines Day I discovered some hearts on toothpicks that had been in my kitchen for over a year.  I was determined to use them this year.  So it had to be cupcakes.  And I wanted to make red velvet cupcakes but there was a tub of blackberries from the farmers market to be used.  So it was that on Valentines Day I found myself presenting E with a batch of chocolate blackberry cupcakes.  He was most pleased. 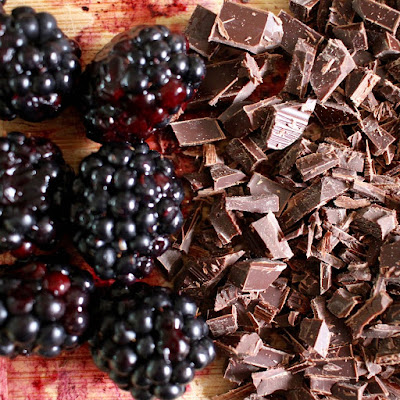 I confess it was a rush job.  Not much time to make the cupcakes, bake them (forgetting I had left them a few minutes more as I wrote emails), cool them by the door so I had time to frost them.  I was so pushed for time that I only iced half of them with a cream cheese frosting that I really liked.  A quick photo and then I rushed out the door. 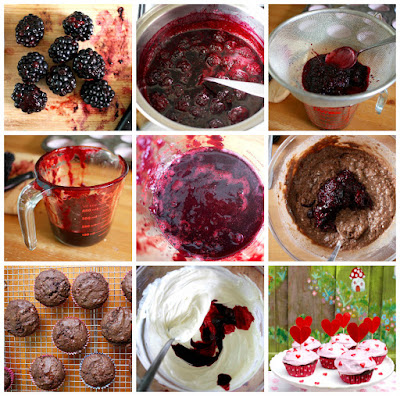 When I got home from work, I found that Sylvia had invited a friend over to play.  They had found that some cupcakes needed icing and got to work.  In the fridge were a few tubs of leftover icing and Sylvia is very familiar with where I keep my sprinkles.  I was quite impressed with her handy work when I got home. 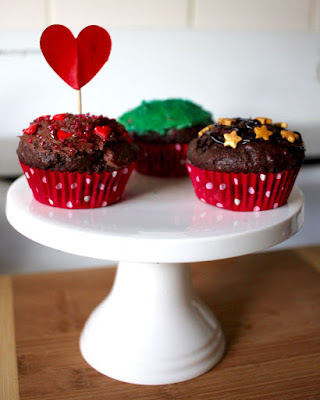 Apparently the cream cheese frosting was not a hit.  We had a conversation tonight about Sylvia wanting buttercream on cakes but she didn't want it too sweet.  I had to tell her the sad fact that buttercream is full of sugar.  There is no getting around it.  Sugar gives it structure.  I love trying alternatives.  The cream cheese frosting has very little sweetening.  It is like a cheesecake that doesn't have much sugar. 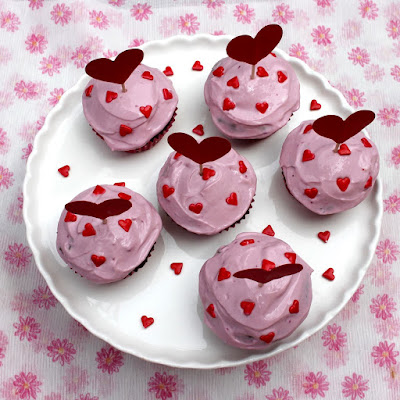 Now that we come to the question of sugar, I have to let you know that I think these cupcakes are not very sweet at all.  I was in such a hurry when I made them that I accidentally added chocolate that was meant for a chocolate ganache frosting.  When they came out of the oven they were not very sweet at all.  So little that I began to wonder if I had forgotten to add the 1/2 cup of sugar.  It is the sort of thing that is easy to do when dividing up sugar and racing the clock.  But I think I put it in.

The cupcakes were on the verge of bitterness.  They were also quite dense without being stodgy.  I thought that they paired really well with the yoghurt frosting which added a little softness and sweetness, especially when quite fresh before it firmed up.  I also reduced the coffee and vanilla in the original recipe but decided next time I would leave them out altogether and have altered the recipe below accordingly. 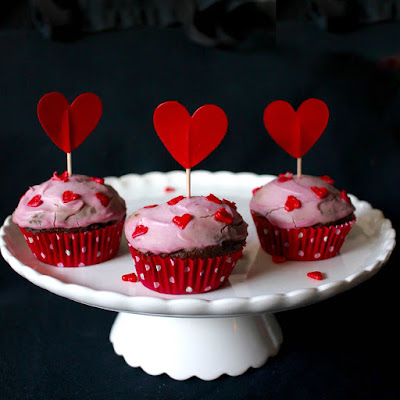 These cupcakes were a fun experiment with blackberries, hearts and frosting.  And while we are not big on Valentines Day in our house, it is always nice to have some good food to help us enjoy the day.  I head heaps of blackberry syrup over and will let you know what I did with it soon.

I am sending these cupcakes to Treat Petite and We Should Cocoa.

Heat blackberries with 1/4 cup of sugar over medium heat for about 10 minutes.  Strain to make about 1/2 cup blackberries syrup.  Set aside extra syrup for frosting and keep the pulp of the fruit to mix into batter.

Spoon into muffin cups (about 3/4 full) and bake for 20-25 minutes until cooked. Cool on a wire rack and frost with below frosting or a buttercream frosting.

Cream Cheese Frosting:
Adapted from Laws of the Kitchen

Stir cream cheese until creamy and gradually stir in yoghurt, blackberry syrup and honey.  This frosting is very soft when spread initially but sets firm by 10-12 hours and within less than 24 hours is starting to crack.

On the Stereo:
The Beekeeper: Tori Amos
Posted by Johanna GGG at 23:24