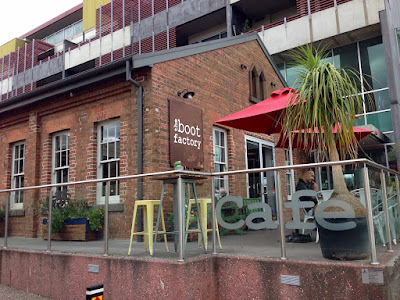 Recently, I have had a few visits to the Boot Factory in the old Pentridge prison site in Coburg.  It does some nice vegetarian dishes and excellent chips.  However its charm lies in the way the old prison boot factory has been transformed into a quirky and welcoming space with an eclectic mix of modern art and retro touches. 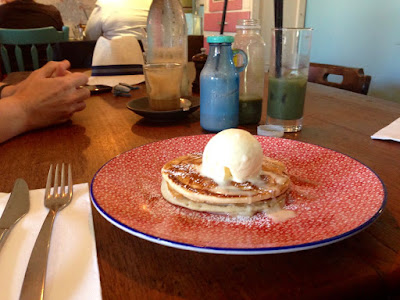 Our first visit was on a Saturday morning which we decided to have brunch at the Boot Factory after picking up Sylvia from a sleepover.  She had been up late and was quite grumpy.  But she enjoyed her kids pancake with ice cream and maple syrup.  She also had a milkshake in a cute blue bottle. 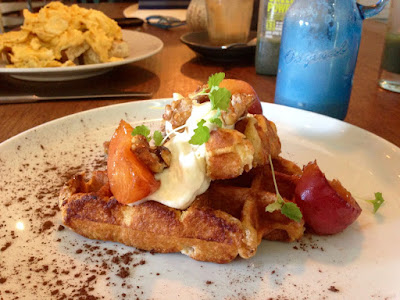 I was tempted by the specials board.  I could not pass up the chance to have waffles with roasted peaches and candied walnuts.  I had overlooked the cream on the menu and wished I had asked for the cream to be on the side.  Yet I still enjoyed this even though I could have had more peaches and walnuts and less of the cream.  I think E had scrambled eggs on toast and liked them. 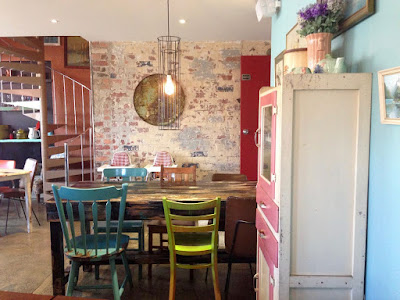 I have managed to take a couple of photos of the interior with no people in it.  This was no easy feat as the Boot Factory is a large space but has been quite busy both on weekends and week days when I have visited.  I like the mismatched retro chairs, the distressed brick walls and the comfy lounge chairs.  The space is large but is broken up so it feels cosy rather than like a barn. 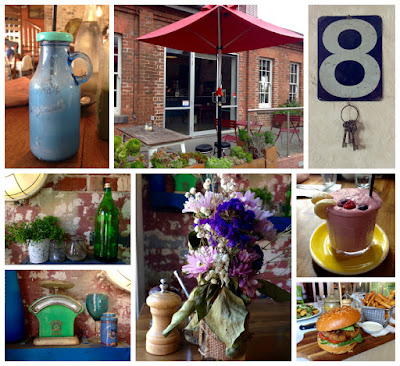 The second visit was with Sylvia's kinder friend Amelia.  Her mum was chilled to think of this having once being part of a prison.  The building dates back to the 1850s.  Well behaved prisoners at Pentridge made shoes and boots here for the prison guards.  A few little touches such as the keys and some painted boot remind us of this history.  I sometimes wonder what Coburg would be like if the prison was still open.  It is now a huge area of new housing with more planned. 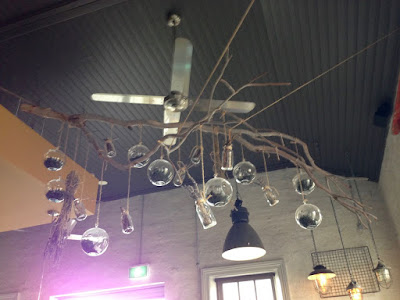 I was more fascinated with this mobile of blown glass and twigs that hung from the ceiling.  It is quite striking.  I wish had been able to take a better photo but instead have a quick snap between catching up with friends.  At least I have captured the large windows below that fill the space with light.  There is also a large table for big groups at one end that I did not manage to photograph. 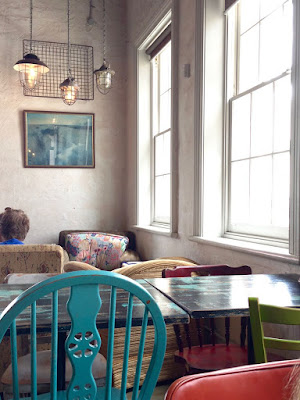 Sylvia and Amelia both ordered the pancakes with ice cream and maple syrup.  They also had milkshakes.  Sylvia was most displeased that her milkshake came in a plastic cup because she had been rather taken with the cute blue bottle.  I checked and was told that they had just run out.  Amelia's mum had the fruit toast with gingerbread butter.  She also had the berry and banana smoothie which looked really good. 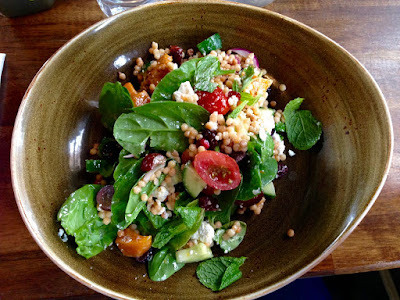 I had the Salad of Pearl Couscous on this occasion and really enjoyed it.  The menu describes it as also having "honey roasted pumpkin, heirloom tomatoes, grapes, feta, pomegranate, spinach and cranberries".  There was a note that they had a dairy free option but when I asked I was told this meant it could be served without the feta.  It was a delicious and light dish full of vegies and flavour. 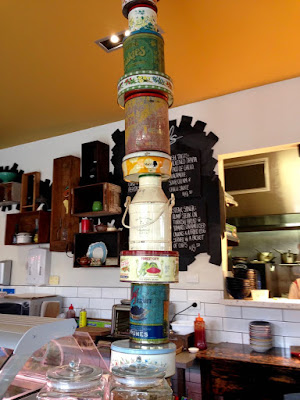 The kids were a bit stir crazy once they had eaten so they ran outside while we paid at the counter.  As I mentioned above, it is a large space and I had not noticed this stack of biscuit tines, milk tins and other tea caddies that look like they are holding up the building!  I love these sorts of old tins but often wonder what you can do with them. 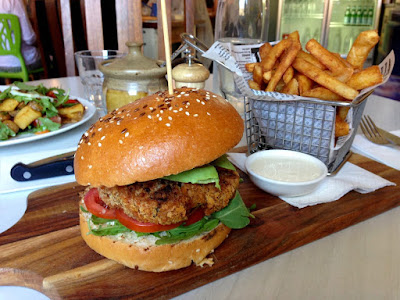 Most recently I visited with my mum for lunch during the week.  I had been tossing up between the burger and the salad on my previous visit.  So it was good to have a chance to taste the sweet potato burger with avocado, grilled haloumi, bitter greens, tahini yoghurt served with beer battered chips and lemon aioli.  This was really filling but I really loved it.  In particular, I must sing the praises of the crispy fries.  They were so good but I was so full I could not finish them. 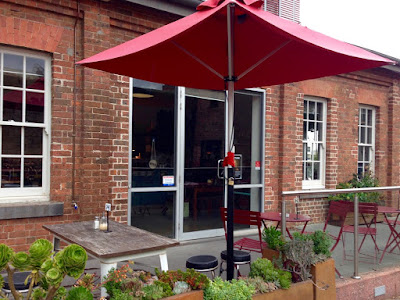 I was talking to a friend who said that she was not so interested in the food at the Boot Factory.  It does not have the wow factor of the Glass Den, though the ambiance is definitely impressive.  I am sure I will be back there but less so because all the savoury breakfast dishes have egg in them (except the salmon one).  There is not much for vegans.  On the plus side, I like that there are kids meals and milkshakes.  There is also a new menu promised for new month. 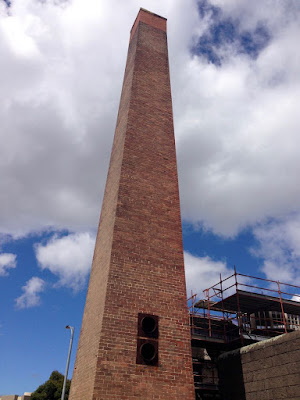 And I find the historic buildings of Pentridge Prison quite beautiful in an eerie way.  So I leave you with a photo of the chimney just outside the Boot Factory. 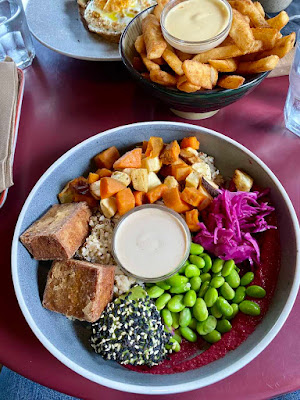 Update 2021: I have had the Nourish bowl a few times this year.  It is a very pleasing mixture of beetroot hummus, pickled cabbage, edamame, sesame crusted avocado, roasted root vegetables, quinoa, brown and red rice, marinated tofu and cashew tahini dressing ($21).  It is so satisfying and delicious.