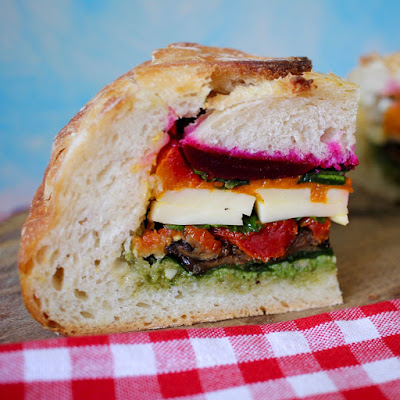 Some things are worth waiting for.  I have wanted to make a stuffed picnic loaf for a long time.  I am glad I waited until I could make my own sourdough loaf to make it with.  I also took great inspiration from Jac's colourfully layered loaf at Tinned Tomatoes.  As usual, I also had some of my own ideas to add. 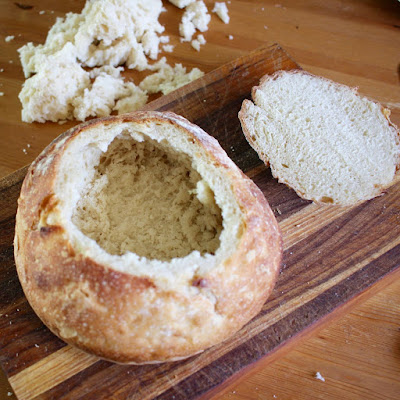 The idea of stuffing a loaf of bread with cheese and vegies seems convenient for a picnic. I wondered about a vegan version with a layer of cashew cheese but went for the easy dairy option.  I also wasn't sure if this is what is known elsewhere as a muffuletta loaf but Wikipedia says it is made with a focaccia style bread.

I made a favourite sourdough loaf the day before I stuffed it, but I am sure it would have been fine on the same day.  Slicing the top off and pulling out the bread was a nervous moment.  If I got it wrong there was no second loaf to work on.  But it was fine.  Though when I look at photos, I think I could have pulled out a bit more of the innards of the loaf.  I was scared of making a hole but I think I probably could have plugged it if there was a tear. 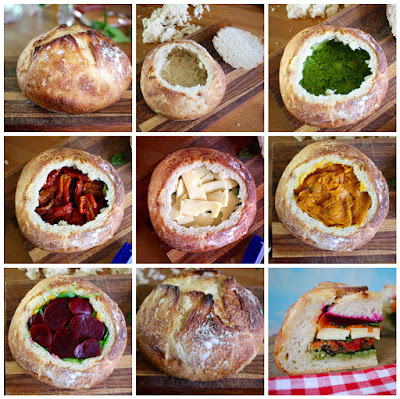 Planning and layering the fillings was great fun.  I don't have a proper recipe with quantities but have written what I did at the end of the post.  I just used  any of the extra fillings in sandwiches.  There was a bit of preparation work with making the pesto and roasting the pumpkin and eggplant the day before.  The eggplant was roasted until quite well browned and seemed a little crisp when out of the oven but it softened overnight.

It was meant to be pressed in the fridge overnight but there is not much room to pile anything on top in our small fridge.  So I took it out a couple of hours before heading to the picnic and pressed it with a mixing bowl, some tins of beans and some heavy cookbooks.  (In retrospect the mixing bowl was a bit too small on the base to cover all of the loaf.) 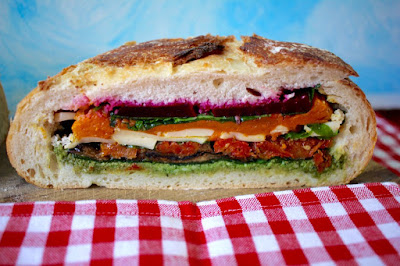 Cutting the loaf open made me quite nervous.  I half expected it to fall apart.  But no!  It held together beautifully with gorgeous layers of colour.  I was a proud picnic loaf mama!
I sliced the loaf into wedges but pushed them back together into the loaf shape which I wrapped in roil to take to the picnic dinner before a Grease singalong at Moonlight Cinema.  It felt like very fancy picnic food.  I really loved this though I thought the sundried tomatoes were a bit tough to bit through.  Everything else was lovely and soft.  Maybe semi dried tomatoes might work better. E was less impressed.  He told me it was as good as he could expect of soggy bread with eggplant.  When I heated it for dinner the next night he much preferred it.  Though he still tells me it would be better without eggplant.  I was happy with it hot or cold.  Sylvia did not touch it.

The Moonlight Cinema trip was a birthday treat so we bought Golden Grass tickets which meant we had seats near the front on bean bags and could order food from roving waiters.  I had meant to bring cake with us but forgot so we ordered churros.  They were lovely. 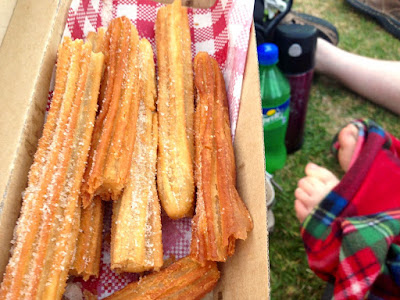 We took Sylvia along with us as it wasn't a school night.  She was excited at being up late but fell asleep before the movie ended.  I grew up with a sister who was obsessed with Grease so was very excited at the singalong.  I did cringe a bit at all the sexual innuendo with Sylvia there but had to remember how that sort of stuff went straight over my head when I watched it as a kid.

Seeing the lyrics made me realise that I was singing the wrong words in some songs during all those years of singing along in my youth.  Those were the days before you could look up lyrics online.  I remember the kids dancing on the school oval to "Greased Lightning" at lunchtime and singing it at the school talent quest but never realised that song had so many technical car terms.  The singalong was lots of fun.  It had been too long since I had been at Moonlight cinema and I was glad to be back with my fancy picnic loaf.

I am sending this loaf to Meat Free Mondays.

Vegetarian Stuffed Picnic Loaf
Serves 6-8
Slice top off bread and keep lid for later.  Make a bread bowl by pulling out the insides to leave the crust around the edge.  (The innards of the loaf can be turned to breadcrumbs.)

Layer the remaining ingredients inside the bread bowl.  The loaf should be full at the end.  You can do more than one layer of ingredients if not enough.  Once it is full, return lid to the top of the loaf.

On the Stereo:
Once: original soundtrack by Glen Hansard and Markéta Irglová
Posted by Johanna GGG at 23:07