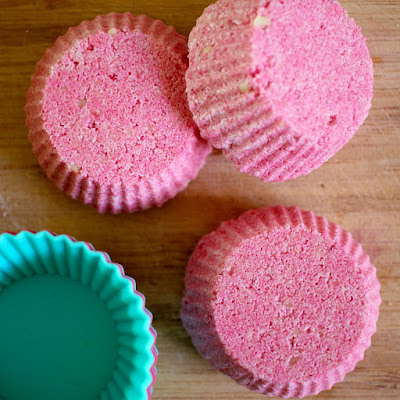 Back at Christmas time, my nieces made bath bombs while we were at my parents' house.  Sylvia is quite keen on bath bombs for her bath at the moment so I decided to make some at home.  We have now made them about 3 times and I am writing up the recipe in a way that I find easier to follow than that on the CSIRO website. 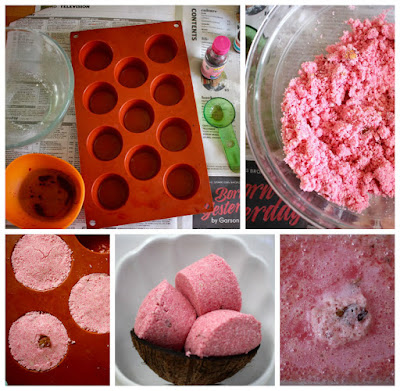 My mum originally looked for bath bomb recipes because she had heaps of epsom salts leftover from coating candle holder jars over Christmas.  Then she found an even easier recipe.  It came from the CSIRO.  For those not in Australia, CSIRO stands for the well regarded Commonwealth Scientific and Industrial Research Organisation.

We liked the recipe because it had easy to purchase ingredients.  One of my nieces happily donated some of her body glitter and I tried one batch with dried rose petals but Sylvia prefers none of this.  The recipe is quick to make - probably about 10-15 minutes.  It is also great for anyone who wants to use up bicarbonate of soda - I have gone through a lot in making this recipe.  I actually ran out of bicarb  in the last batch (top and bottom photo) and had a little less than needed, so I added a little more citric acid instead. 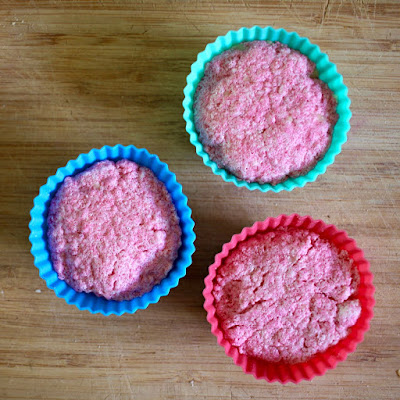 The problems I have had with these bath bombs are that they leave an oily ring around the bath and when we put them together after they dried, they stuck together.  Small problems.  I think they are really soothing and softening in the bath and so easy to make.  We have bought some individual silicone cupcake moulds which are great to store them in.  I am sure they would make great presents in the cupcake moulds with some cellophane wrapping.

Bath Bombs
From the CSIRO
Makes 4 mini muffin sized ones

Mix bicarb soda and citric acid in a medium mixing bowl.  Add in a few shakes of glitter or dried petals if using.  Mix food colouring, essential oil and olive oil in a small bowl. Slowly pour liquids into dry ingredients and gently mix until you have a sandy consistency.  Pat into mini muffin cups or other moulds.  I use silicone moulds and don't need to grease them.  As the mixture dries it clings together and expands slightly.  However even once dried, if out of the mould they can stick to each other or a container if not kept in some sort of packaging or individual container.

NOTES: The CSIRO recipe calls for sweet almond oil but as I don't have it in the house and I know some people say olive oil is very good for the skin we use the olive oil instead, which we always have about.