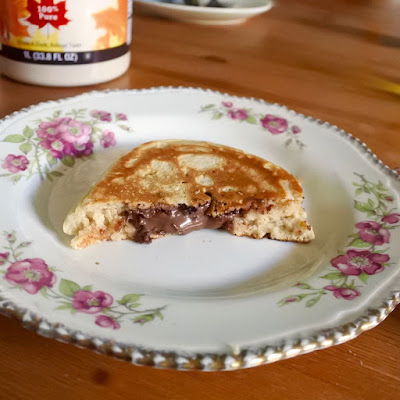 The weekend we had a day at home to potter about and try to organise the house.  Some messy corners were tamed and regular chores done, I found some time to read my book and Sylvia went to the park with a friend, but best of all was starting the day with fluffy pancakes oozing with a blob of decadent Nutella in the middle. 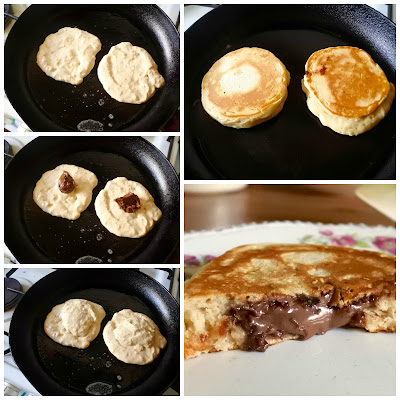 Last winter I first tried making these stuffed nutella pancakes with a favourite banana oat pancake recipe.  With nutella in the house this weekend, Sylvia requested it for breakfast.  I tweaked the pancakes we often make (based on Vegan Brunch) and nutella worked so much better in these.  In fact I wasn't going to blog it but I just loved how fluffy these pancakes were that I wanted to make notes of what I did. 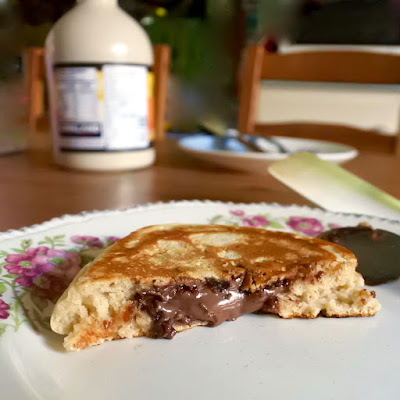 To cook:
margarine for frying
1/3-1/2 cup nutella (or chocolate spread)

Mix all ingredients together.  (You can mix dry and wet ingredients separately and then mix or you could mix them in a blender but I just put them in in order that I listed them.)

Heat a frypan to medium to medium high heat.  Rub a knob of about 1/2 to 1 teaspoon of margarine to cover frypan (I use a teaspoon to do this.)

Drop heaped dessertspoonfuls of mixture on frypan and use the back of the spoon to spread each as much as possible into a circle.  Drop a heaped teaspoon on nutella in the middle of each pancake and cover with as much pancake mixture needed so you can't see any nutella.  Fry for a few minutes until pancakes looks cooked (the texture will dry out a little and there might be a few bubbles).  Flip over and use an eggflipper (spatula) to flatten slightly.  Cook another minute or two until cooked through and remove to a plate.  Best eaten warm.

On the Stereo:
Singles: Suede
Posted by Johanna GGG at 22:08