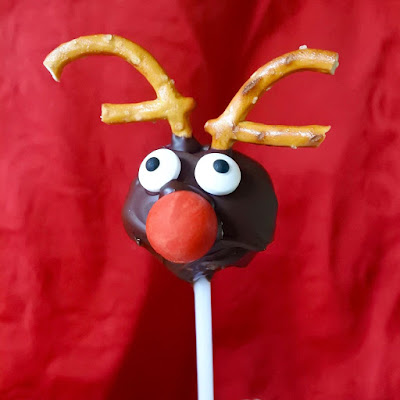 You might do a double take at a Rudoplph the Red Nosed Reindeer in the middle of the year but I love celebrating Christmas in July.  We had some friends over for a wintery festive dinner this weekend.  I will write more about the dinner when I have a bit more time.  Today I will just tell you about the fun reindeer cake pops we made for the dessert. 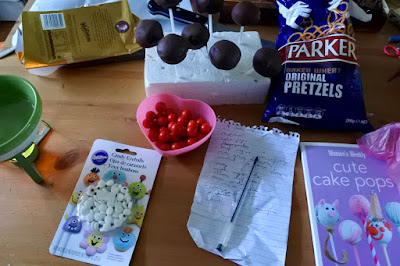 While thinking about Christmas food, I came across a reindeer cake pop on Caroline Makes.  It looked simple enough.  However I decided I am rubbish at eyes and it would be even easier if I bought edible eyes at Cake Deco in the city.   I thought the reindeer had a jaffa nose but it the supermarket wasn't selling packets of jaffas (red-covered orange-flavoured chocolate balls).  I had to buy them at nut shop.  Then I read Caroline's post again and found she used MandMs.

When I made the Aboriginal flag cake on Monday with Sylvia and her friend, I doubled the recipe and kept half aside for cake pops, including the buttercream frosting on top (but discarding the liquorice decorations).  I added a little yoghurt to make sure it clumped together.  The cake was really sweet and I would probably use a less sweet cake (or reduce the sweetness in this one) next time. 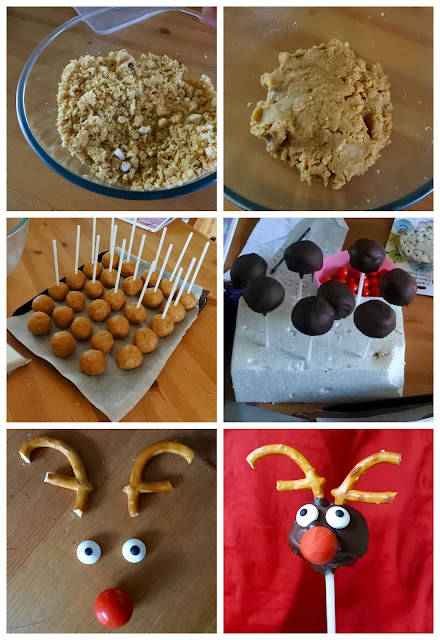 Sylvia also has a favourite Women's Weekly Cute Cake Pops book she browse regularly and makes recommendations as to what I should make.  It was useful in looking for advice in making the cake pops.

One tip was to use chocolate melts or chips rather than eating chocolate because it melts and set better.  So I used choc chips which worked well, though they are far sweeter than the dark chocolate we regularly eat.

Last time I made cake pops I remember talking to my mum about the melted chocolate being too thick.  She suggested putting the bowl over a saucepan of simmering water.  I took her advice - sort of!  I put the chocolate over a little bowl of boiling water with a candle underneath. I think it is an old chocolate dipping set.  It worked a treat in keeping the chocolate melted and not too thick. 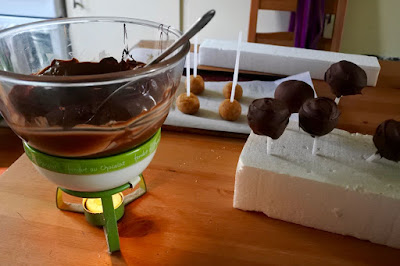 Once the cake pops were dipped, the next challenge was to prepare and add the antlers, eyes and noses.   Thank goodness I bought the eyes.  Chopping the pretzels in the shape of antlers was challenging.  So many cracked the wrong way that I think my reject pile was bigger than my antler pile.  Below is a picture of a whole pretzel and one of a sliced one showing which part of the pretzel I sliced.)  Afterwards I checked out more online reindeer cake pops and wondered if I should have experimented with chopping different part of the pretzel.  Hindsight is a wonderful thing!

I also decided it would be easier to stick the jaffas on if I sliced off an edge so they had a flat edge to stick to the cake pop.  Again many jaffas shattered so I had lots of rejects here too! 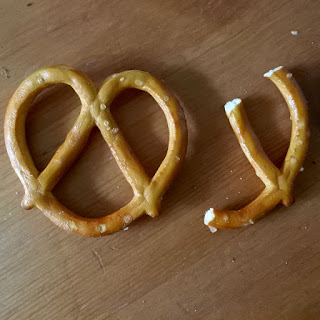 I put together and dipped the cake pops while Sylvia was at a friend's place.  I had promised I would leave some for her to decorate.  In fact, the three below were the only ones I had the energy to decorate before she got home.  She was delighted. 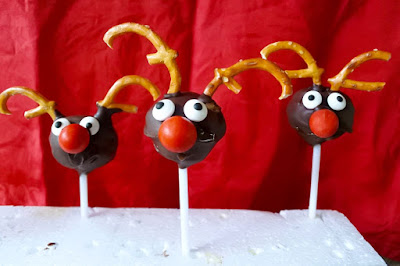 And I was glad to have her helping.  After a day of cooking and cleaning, I was flagging.  Sylvia made quite a few of the rest, though some just collapsed for both of us.  At the end we had about 14 or 15 and quite a lot of plain cake pops are still in the fridge.  (I should note that the cake I used had lots of oil in it rather than butter and some of the chocolate covered cake pops had tiny beads of oil appear on them, which makes me wonder if butter in the cake is better than oil.) 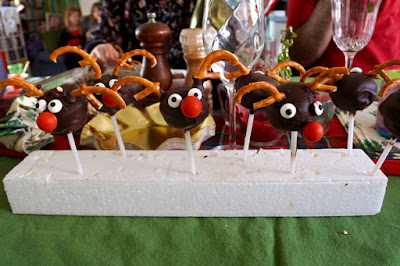 The cake pops were great fun at the Christmas in July dinner.  I did not have the time or space to present them nicely so they were served unceremoniously on the squares of foam.  The kids loved them but I suspect they were more fun to look at than eat as they were very sweet.  (Honestly I would prefer eating grubs to mushed up cake!)

As my first foray into decorating cake pops, I was pleased with our effort and am sure I will be persuaded by Sylvia to do it again!  Meanwhile I will be back soon with more on our Christmas in July dinner.

Half this cake (or a 20cm buttercake such as this or this)
Spoonful or two of binding agent such as buttercream frosting, cream cheese or yoghurt
400g choc chips
Pretzels
Edible eyes
Jaffas (or red MandMs)

Crumble the cake into a large bowl and massage into a clump with your hands using some frosting or cream cheese or yoghurt, as required to bind it.  I found that as my cake was frosted and quite moist it needed very little extra moisture.

Roll into balls about the size of a walnut.  Place on a baking paper lined baking tray or other tray and stick cake pop sticks or icy pole sticks into the balls.  (I do this when freezing the balls and when I cover with chocolate I make sure some of the chocolate is on the stick but I see others say to freeze balls and then dip stick in chocolate and stick into balls.)  Chill in freezer for about an hour or in fridge for a few hours.

Melt about half the chocolate and set bowl over a bowl of boiling water to keep chocolate melted.  Prepare some polystyrene blocks to stand cake pops in.  (Or use cardboard boxes with holes in them.)  Take a few cake pops from the freezer at a time and dip in chocolate, using a spoon to cover them if needed.  Let as much chocolate as possible drip from them and then stand to set in polystyrene foam.  They will set quickly and can be returned to the fridge until ready to decorate.

Before decorating cut antlers out of pretzels as depicted in photo in post and slice edged off jaffas.  To decorate first put in the antlers.  I had a metal skewer that I heated on the candle under the chocolate and then made a hole in the cake pop with it, cleaned the skewer and repeated to make a second hold.  Dip the ends of two "pretzel antlers in chocolate and push into holes.  Put a small amount of melted chocolate on the eyes and nose (just enough to make it stick but not so much that eyes/nose will slide off and take ages to dry) and place on cake pop.  If they don't stick after holding it there a few seconds, you are using too much melted chocolate.  While putting on antlers, eyes and nose, try to hold by stick rather than touching the chocolate (which will leave finger prints).

I kept my cake pops in the fridge overnight in the polystyrene foam holders.  Take out of the fridge shortly before serving.  (They are also good at room temperature but more fragile.)

On the Stereo:
White Christmas: Bing Crosby
Posted by Johanna GGG at 23:25