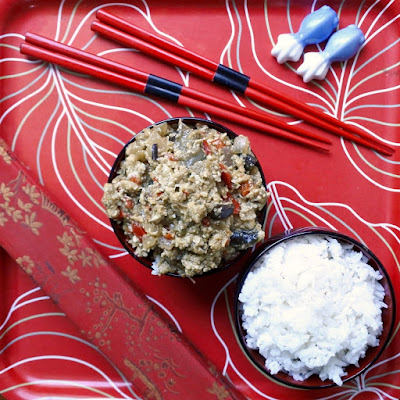 Eggplant (aka aubergine) does not appear often in our kitchen.  So I was very pleased with myself when I recently made a braised eggplant and tofu dish for dinner.  I asked E what he thought.  "Passable."  So I asked what he didn't like about it.  "The fact that it was eggplant and tasted like eggplant".  Oh!  Well, I told him, that is what I will be serving tomorrow night unless you feel like eating a raw potato! 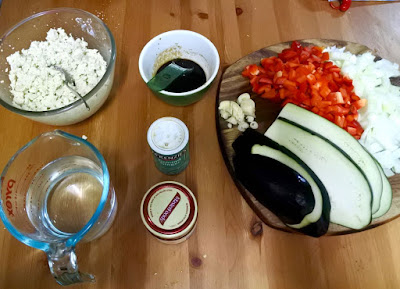 Indeed it is a challenge to make eggplant dishes in our house.  Though to be fair, E did eat it the next night and conceded he enjoyed the flavours.  (Better than a raw potato!)  The recipe is based on a family recipe that Lorraine of Not Quite Nigella shared which used eggplant and chicken.  I did my best to be really organised before I began and cooked the eggplant until it melted in the mouth.  I wanted to make sure there were no accusations from E about it not being cooked enough. 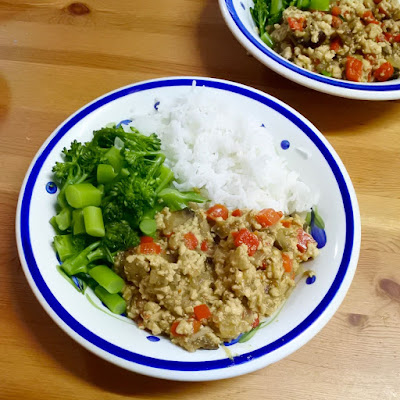 The finished dish looked very different from the dark saucy dish that Lorraine shared.  I had not been quite sure how to cook the tofu.  So I crumbled firm tofu.  However I always have problems with frying tofu tossed in cornflour.  It just sticks to the pan.  So I decided not to bother much with it.  Later I wondered how the dish would be if I had fried cubes of tofu without bothering about the cornflour and then added to the braising. 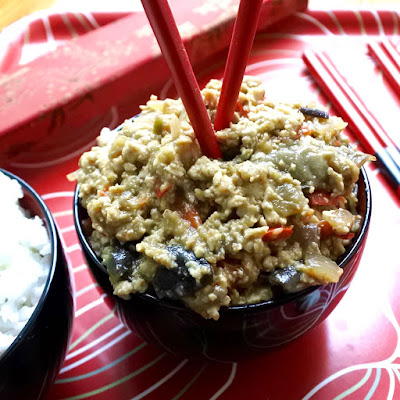 The way I cooked the tofu, it ended up as soft as the eggplant.  Not a bad thing.  It was a very soft comforting dish with lots of seasoning and a slight heat from the ginger and chilli.  I am not sure that E would encourage me to make it again.  I would like to try it again with the tofu fried crispy and to try coconut sugar instead of white sugar.  It is a really lovely dish that I could see working well in a Chinese buffet.

I am sending this dish to Kimmy and Mary Ellen for Healthy Vegan Fridays, Cindy for Gluten Free Fridays, Jac for Meat Free Mondays,

Braised eggplant and tofu
Adapted from Not Quite Nigella
serves 4


Prepare everything before you start:

To make the dish:

On the Stereo:
Best of John Denver
Posted by Johanna GGG at 23:10