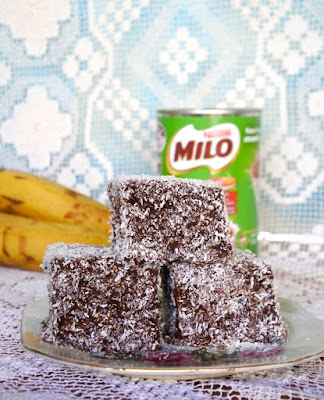 What else is there to do on National Lamington Day but make lamingtons.  It was a close call.  I usually miss these foodie celebration days.  But I had a vision.  I've been wanting to try a lamington with Milo in the chocolate icing.  If you don't live in Australia you might need a translation of this sentence: "I've been wanting to try a piece of cake dipped in chocolate frosting and shredded coconut with chocolate malt powder in the chocolate frosting."  If you haven't tried lamingtons, I highly recommend you do so.  They are a sentimental favourite for me but honestly they taste delicious. 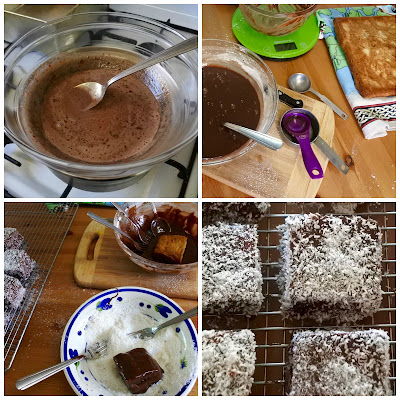 As it happens I also needed to use some manky bananas and searching the web for ideas turned up the brilliant idea of making banana cake instead of sponge cake to make lamingtons.  I simplified a recent favourite vegan banana cake, referred to some impressive lamington icing but added heaps of milo.  I looked at this Love SWAH milo icing and was impressed and the high proportion of milo but am not sure it would work that way on lamingtons.  Nevertheless I think the milo gave the icing a nice mellow malty flavour.

E tells me that these lamingtons are extremely moreish.  I tend to agree.  Sylvia demands that she has one in her lunchbox tomorrow and in turn I am demanding that she wash her hands after she eats them because she creates such a sticky mess with them. 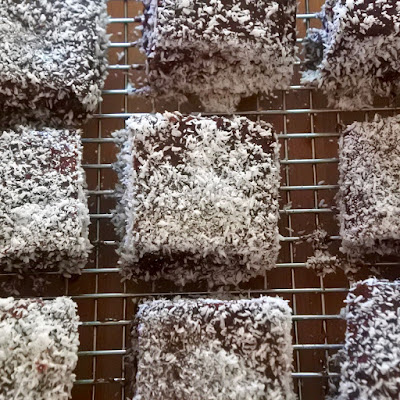 Though I really love them, the great Aussie lamington is so messy to make and eat.  Perhaps next time I just do the modern thing and spread the top of the cake with chocolate icing and sprinkle coconut over it.  Far easier and cleaner.  Yet just not the same as dunking the chunks of cake in icing and coconut!  So I am sure there will be more batches of lamingtons in my kitchen.  Meanwhile I wish you a happy National Lamington Day.

I am sending these lamingtons to Choclette for We Should Cocoa.  I am also sending them to Janie (and Karen) for Tea Time Treats.

For more Aussie recipes check out my Australia Day recipes

Mix milk and vinegar or lemon juice in a small bowl and set aside.  Mix banana, sugar,  oil and salt.  By now the milk mixture should be slightly curdled and can be mixed in.  Add flour, baking powder and bicarbonate soda.  Stir until combined.  Scrape into a greased and lined 20cm square  cake tin.  Bake at 180 C until golden brown on top and a skewer inserted in the middle comes out clean.  (20 to 30 minutes depending on your oven.)

Leave the sponge overnight (or place in fridge for an hour to firm up).

When you are ready to coat the lamingtons, make the chocolate icing.  Choose a heatproof bowl that is about medium mixing bowl size but not too deep because you will be dipping into it.  Stir the margarine and milk in this bowl over a gently simmering saucepan of water until the butter has melted. Turn off heat and remove bowl from the saucepan.  Stir in milo until it dissolves.  Sift the icing sugar and cocoa together and mix into the milk mixture until you have an icing that seems thick when stirring but drizzles off the spoon easily.

Cut the sponge cake into 20 squares (ie four rows lengthways and widthways).  Set up the bowl of chocolate icing with two forks and a spoon, a shallow bowl of the coconut with two forks and a large wire rack.  Drop a square of cake into the chocolate icing and cover in icing, spooning icing over it if necessary.  Pick up the square with two forks and hold above the bowl to let as much icing as possible drip back into the bowl.  Drop the icing covered cake into the bowl of coconut.  Use the forks with the coconut to toss the cake in coconut.  Pick up the cake with the forks and place gently on the wire rack.  As you can see in my list of equipment, I find it easiest to use different forks for the icing and coconut bowls.  This recipe will drip a little under the wire rack.

The lamingtons can be kept in an airtight container.  They are best on the day of making, great the next day and then after that start to diminish in texture.

NOTE: These are vegan if you don't use the milo.  To make these vegan I suggest substituting this chocolate icing (though I think I needed a bit less) and perhaps adding some malt extract syrup instead of soy milk if you would like the malt flavour.