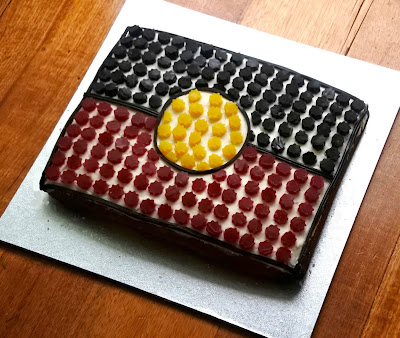 It is NAIDOC Week in Australia.  The name comes from 'National Aboriginal and Islander Day Observance Committee' when moves were made to have a public holiday to celebrate Indigenous culture in Australia.  Now we have a week of celebrations.  This year I decided to make an Aboriginal flag cake to observe the week. 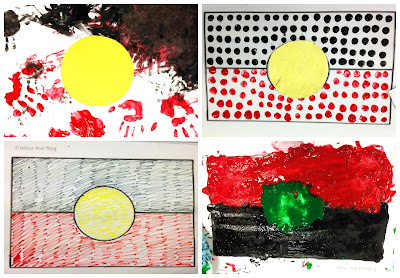 NAIDOC Week heralds a variety of events including flag raising ceremonies, talks, family days and a march.  We don't often get along to many events but I like to go to a local neighbourhood house for craft.  Above is a selection of some of the Aboriginal flags from the craft session. 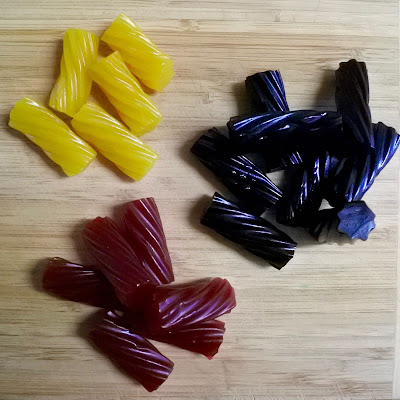 I made the cake the day before with Sylvia and her friend who was over for a play date.  They were great at helping to measure and mix all the ingredients.  As only small children can be!  I iced the cake and left it overnight with a tea towel over it.  The next day I went to the supermarket seeking inspiration for the cake.  Initially I had decided to pipe dots of icing until I worried about making a black icing.  I had thought of using smarties but then I would have so many lollies leftover.

At the supermarket I found red and black liquorice.  Back home I hunted through my cupboards and found a bag of lollies I rescued out of the Minion pinata from earlier in the year.  Yes!  I still had some pineapple liquorice for the sun.  It does pay to keep old lollies in the back of the cupboards! I used strips of liquorice to outline the flag.  This made it much easier to colour in.  Then Sylvia helped me chop the liquorice into dots to use to fill in each space.  I had initially thought they might look like Aboriginal dot painting but the liquorice had ridged that made it look more like the sea of hands that was planted outside Parliament House in Canberra to mobilise non-Indigenous support for reconciliation. 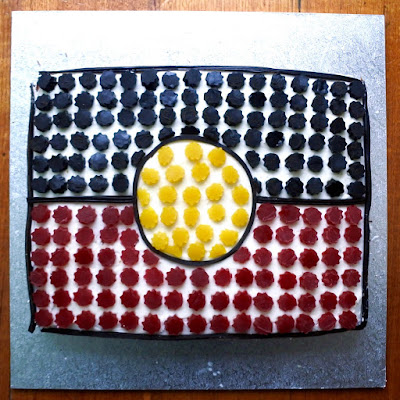 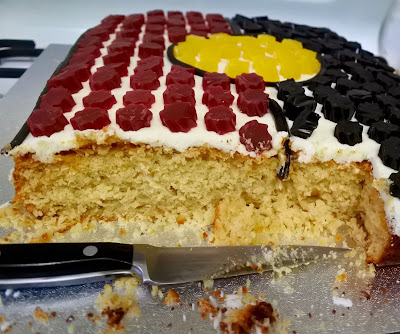 The cake that we made was a Butterless Butter Cake that I have made previously.  I doubled the recipe and used aquafaba instead of egg yolks.  It is more my sort of cake than the Victoria Sponge we made recently but any cake would do.  I am very pleased to have made this large cake.  We will eat some of it at home but I have plans for some of the cake that I will share soon.

Meanwhile to quote poet Oodgeroo Noonuccal, "to our children's children, the glad tomorrow".

Pour mixture into prepared tin and cupcake cups.  Bake for 30-40 minutes or until a skewer inserted in the middle comes out clean.  Leave in tin for about 20 minutes and then turn out onto a wire rack.

NOTES: To make this cake into an Aboriginal flag cake, cover with buttercream, use liquorice strips to outline the areas of the flag and then fill in each part with chopped liquorice (black, raspberry and pineapple).  *This cake is really sweet - I might be tempted to halve the honey next time, though it gives a lovely flavour to the cake.

On the Stereo:
Costello Music: The Fratellis
Posted by Johanna GGG at 21:42