Gaijin Bistro, Phillippa's and a trip to the city 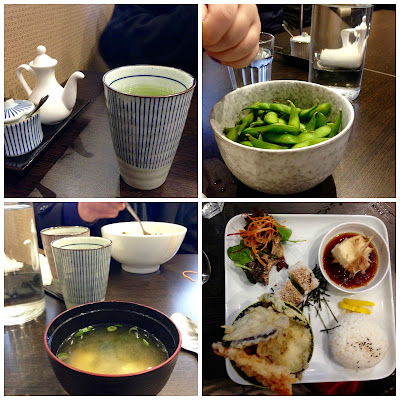 During the school holidays, Sylvia and I took a trip to the city to meet E for lunch.  It started well with a fun visit to Cake Deco where we bought eyes for the reindeer cake pops and then wished we could buy everything else in the shop too.  Then we met E at Shandong Mama and found they aren't doing their amazing crunchy scallion pancakes any more.  I could have cried.  Instead we went for a walk and found some interesting Japanese food at Gaijin Bistro.

E and I had some green tea while Sylvia had water.  Then we started by sharing a bowl of edamame.  They were warm and lightly salted.  What bemused me was that there was nowhere to put the empty pods.  Actually Sylvia thought they were hers.  I thought I had edamame with a bento box so I didn't have many. 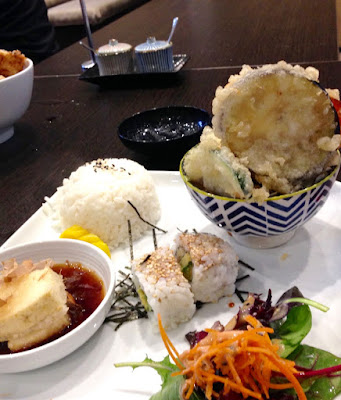 My bento box didn't have edamame despite it being listed on the menu.  I always thing bento boxes are boxes with compartments so I was surprised that my bento box was actually a tasting plate style tray.  It had lightly battered agedashi tofu, vegetable rolls (which were like sushi rolls with seeds rather than nori around them but some thin strips of nori underneath), green salad with a tasty tahini dressing, pickled daikon radish, steamed rice and miso soup plus my choice of a main dish.  Not bad for $12.

I could choose from teriyaki tofu, tempura vegetable and curried vegetables.  I fancied a Japanese curry.  It came topped with some huge tempura vegetables that made me feel like I was given two main dishes.  No complaining there.  The tempura batter was light and crisp and the curry was tasty and warming. 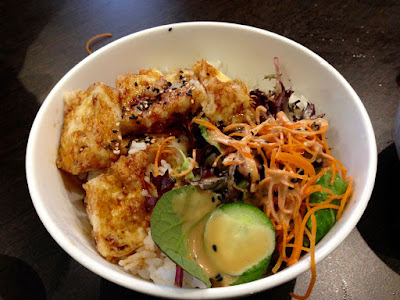 Both E and Sylvia chose the teriyaki tofu ($9).  The tofu was lightly battered and drizzled with teriyaki sauce.  It was served on a large bowl of rice with a side of salad and tahini dressing.  E really enjoyed this.  Sylvia took a dislike to the tofu which was cooked differently to the way I do it.  She said the batter was like saliva.  (Note: please do not take a 7 year old's opinions as restaurant criticism.)

I was curious about the batter and asked the chef at the end of the meal.  My guess was egg white but I was wrong.  It was potato starch.  I was relieved it wasn't egg white!  And when I checked I was told that the teriyaki tofu was vegan. 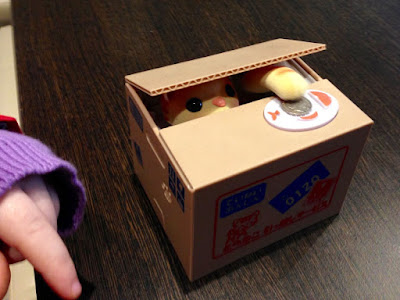 Best of all was this little money box when we paid our meal.  When we put a coin on the plate of fish the box opened and a little cat appeared poking out and swiping the money with its paw.

The bistro is a small clean restaurant that apparently has a bigger cousin in South Yarra.  I was disappointed that they have a long list of sushi but only one vegetarian one.  However I was pleased with our vegetarian food and happy to find somewhere we can eat in the east end of the city. 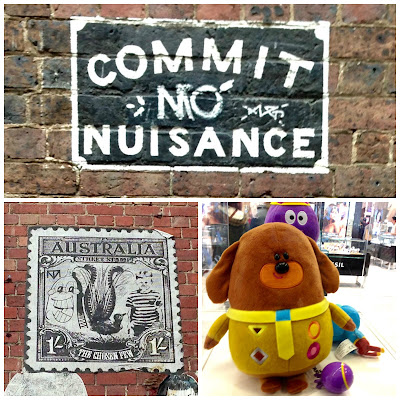 After farewelling E, Sylvia and I spent time wandering around Melbourne's streets and shops.  Sylvia was quite taken with sampling perfume in Myer and wanted a Hey Duggie toy.  We both loved the books in Dymocks and also chose some new crockery for our overflowing kitchen. 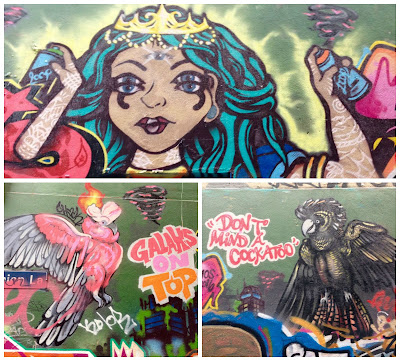 I enjoyed checking out the street art (though I was tempted by a cucumber variation on my favourite Elizabeth Arden Green Tea perfume). 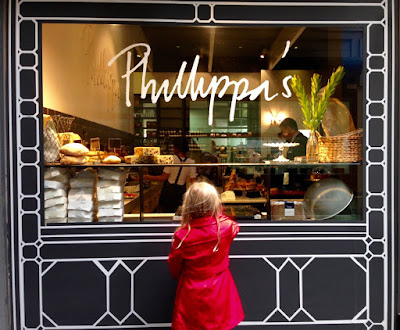 I had promised Sylvia a biscuit after lunch.  We stopped at Phillippa's city store.  If I ever go past, it is hard to resist the temptation of browsing all her gorgeous biscuits and condiments.  Her good are pricey but worth paying top dollar for quality.  One of these days I will stop and try one of her sandwiches. 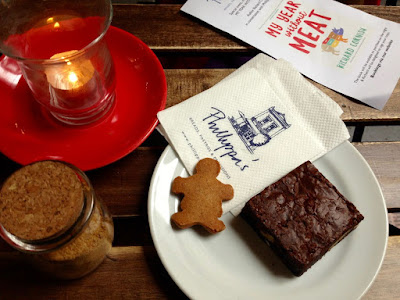 Last week I had a brownie and Sylvia got 3 pipsqueak gingerbreads.  The brownie was superb.  Sylvia was not keen on the walnuts in it but I thought it was exactly the dense chocolatey indulgence that all brownies should be.  We sat outside in the little arcade where there are no outdoor heaters but blankets have been thoughtfully placed on the chairs. 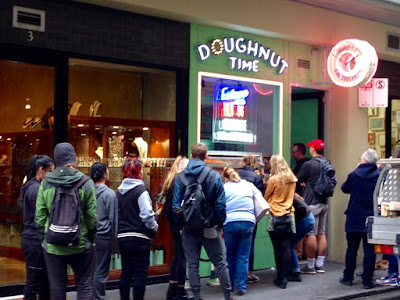 On the way to the train station we sauntered through DeGraves St.  I was impressed with the interesting array of doughnuts at Doughnut Time and made a note to return there one day when I have more room for sweet food.  I hope the queues aren't this long every day.  We also admired cupcakes at Little Cupcakes and tasted chocolates at Chocamama. 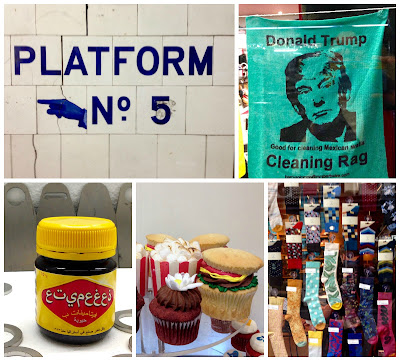 Then it was time to head down into the subway and look at the artwork in the exhibition windows.  We were fascinated by the arabic vegemite exhibition with the arabic label, the wine glass smeared with vegemite and the arabic word written in vegemite.  And of course the Donald Trump cleaning rag amused me. 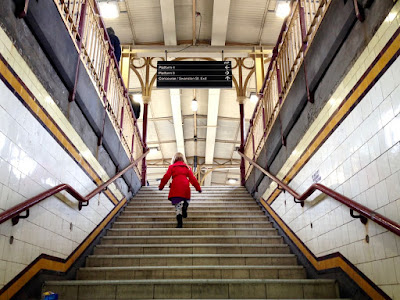 Then we found our train homeward bound past the flooded creek.  When we got out at our station, we were glad Sylvia had brought her teddy his raincoat because it was really cold.  We hurried home to huddle in front of the heater.