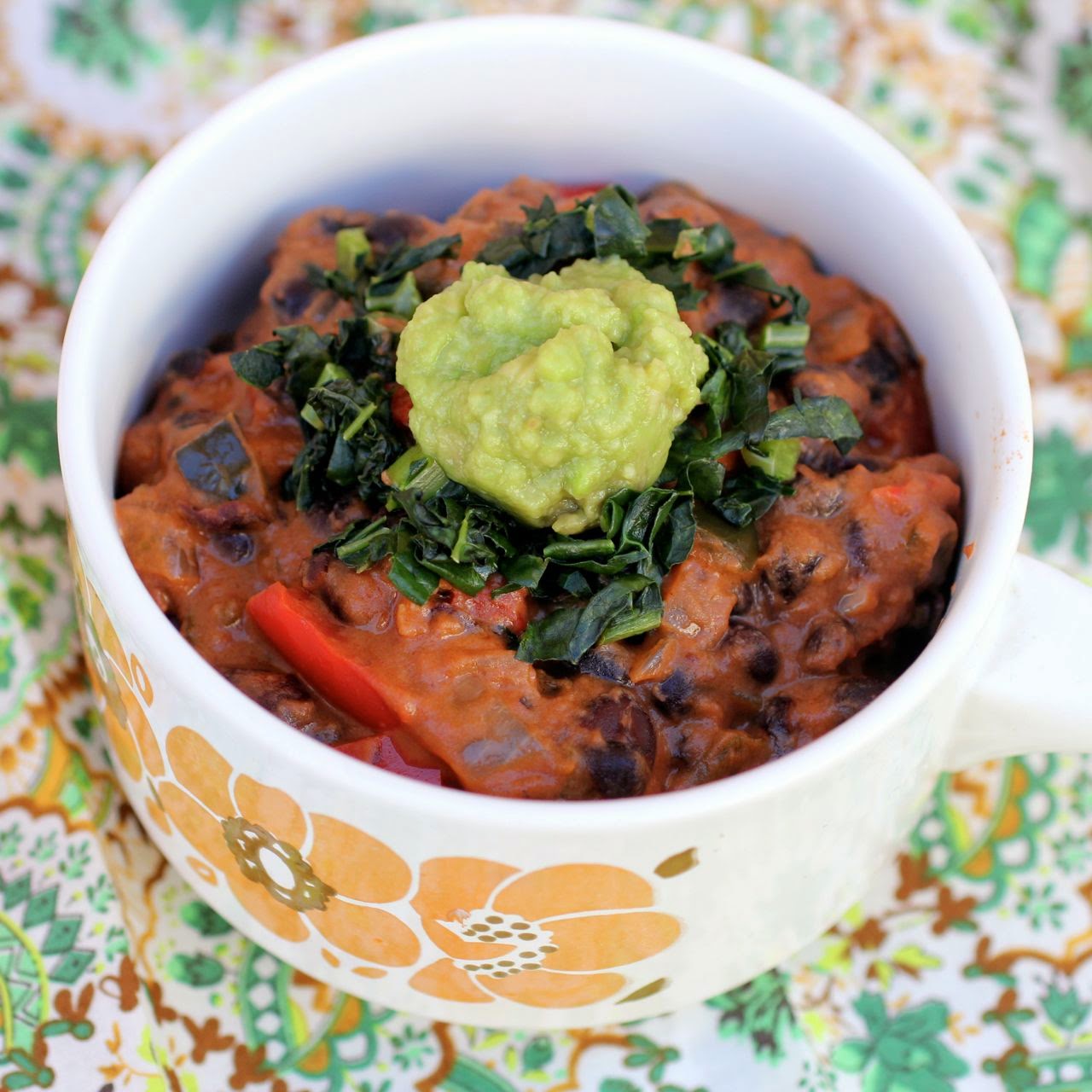 As soon as I saw Janet's Cuban Beer-Infused Black Beans recipe I was sold.  We had beer in the house that I earmarked for the recipe, limes on the tree (most went into limeade), poblano chillis that bemused me, and a love of spicy bean stews. 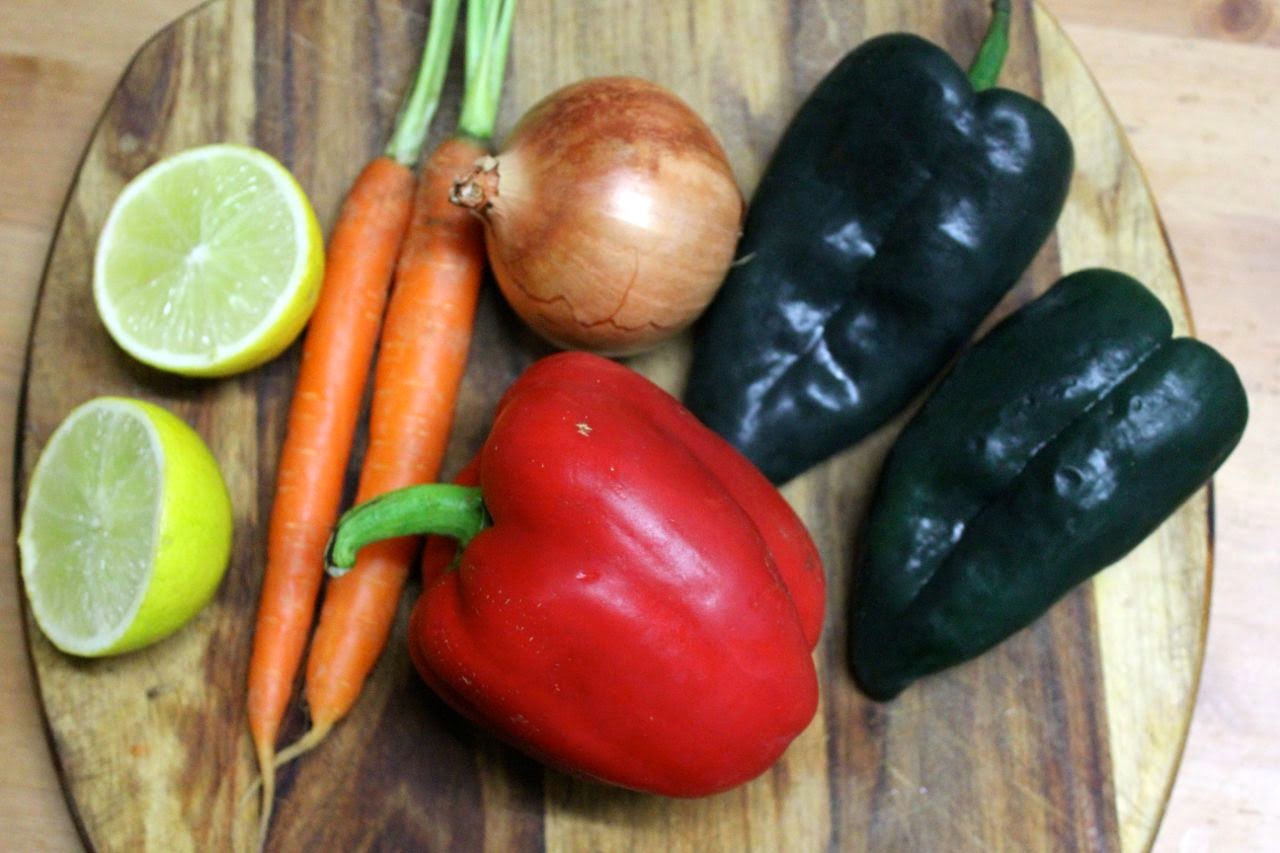 Janet highly recommend the roasted hatch chillis in the recipe that she made but I have never found there here in Melbourne.  However for a short time, our local Coles supermarket had a huge range of chilli peppers.  I bought some poblano chillis on a whim.  I was wooed by the lovely deep green glossy skins.  It was a relief when I got home and looked them up on Wikipedia to read that it is quite mild, with only an odd rogue spicy one.  Finally I have met a chilli pepper I can love.  Sadly it was just a passing phase of Coles and I haven't seen them again. 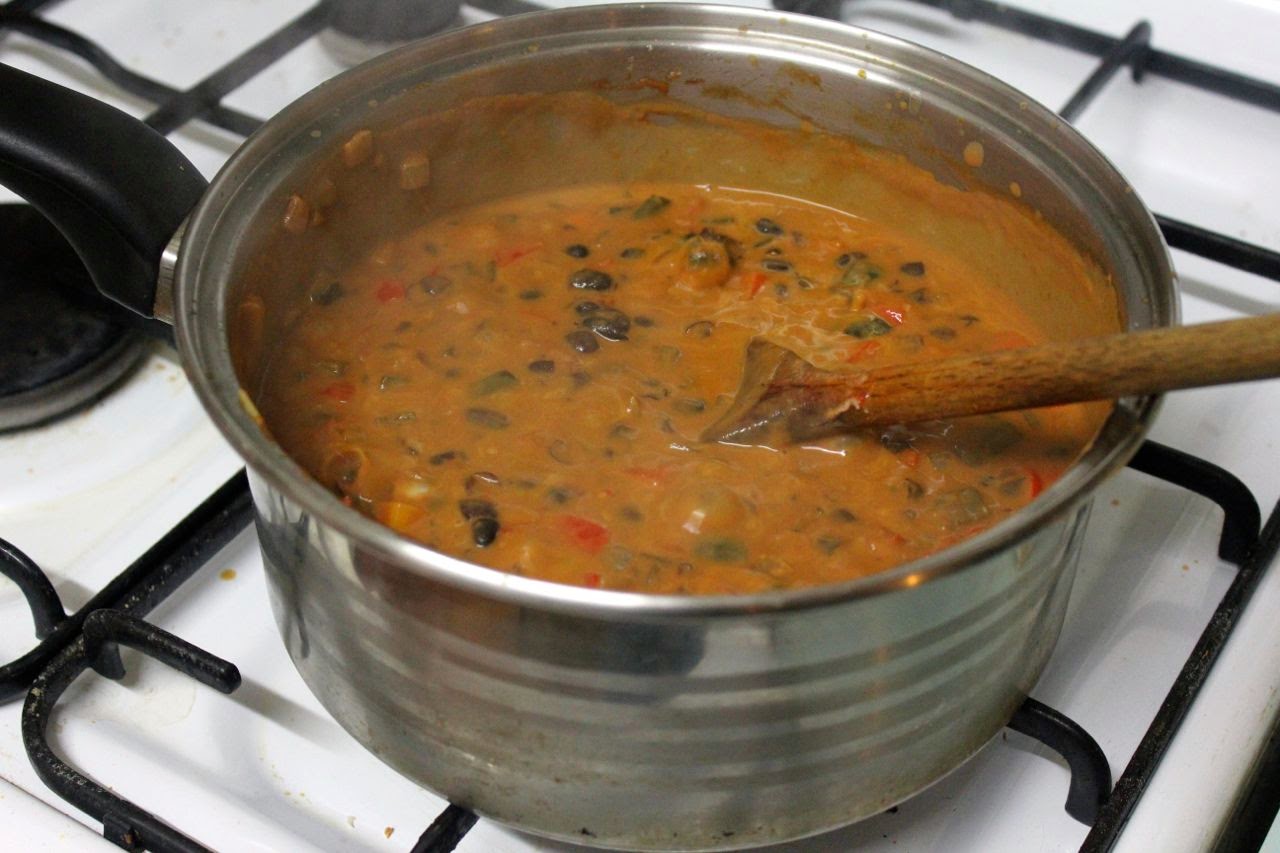 It has been a long time since I made a "chilli non carne" (aka chilli con carne without meat!).  When I was first blogging chilli non carne was the basis of every Mexican dish I made.  Since then I have tried it in many ways - with cocoa, carob, dried apricots, bulgar wheat, hominy, silverbeet and of course a mole sauce.  More recently I have used rapid refried beans in tacos and nachos because it is so quick.  But it lacks the soupy comfort factor of a good chilli non carne. 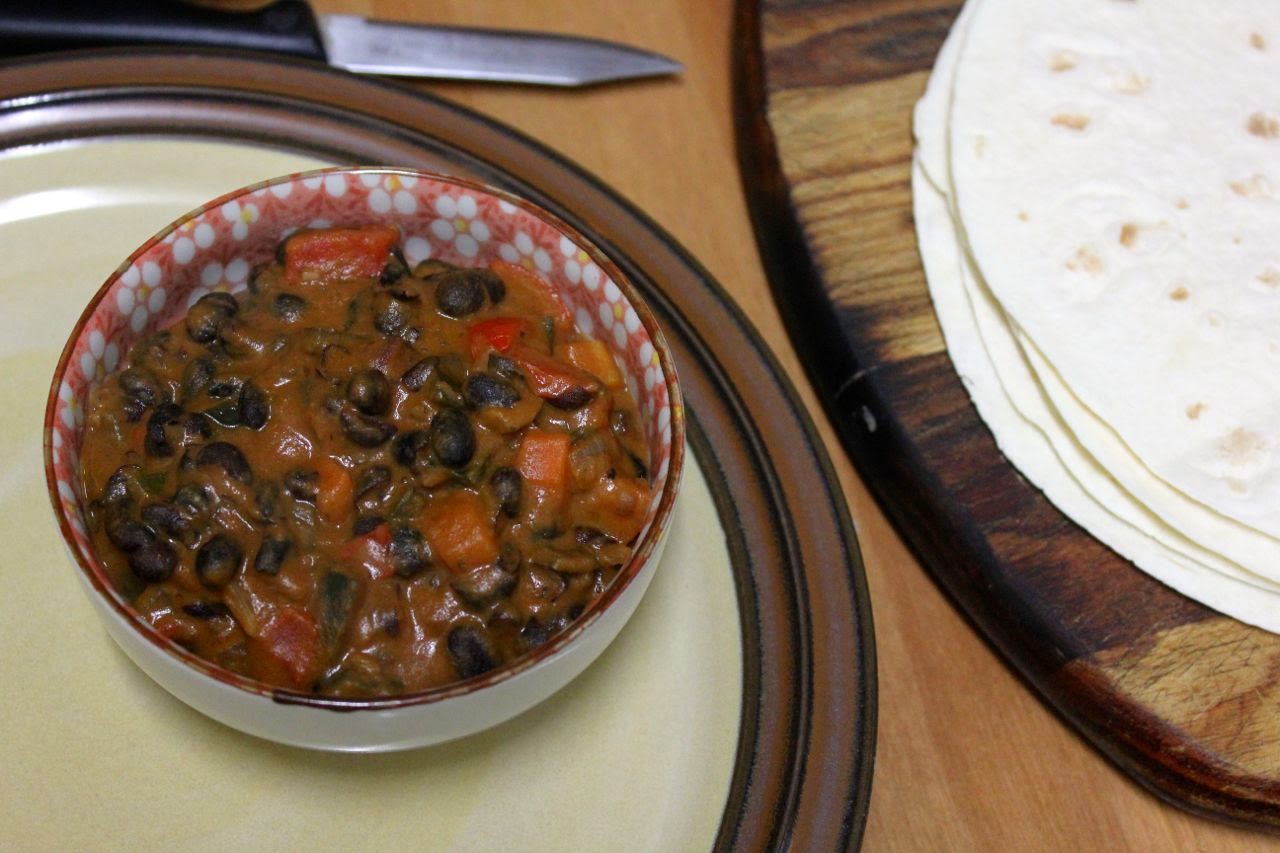 This recipes is actually a Cuban recipe and probably not technically a chilli non carne.  However it is similar enough to be closely associated with it in my mind.  I love it with its creamy coconut milk sauce and depth of flavour.  It seemed very soupy so I added extra tomato paste and simmer it an extra 10 minutes.  I also worried that the soy sauce would overwhelm the other flavours but it didn't dominate once simmered.  We ate it with tortillas, tangy silverbeet and cheese.  Leftover were a delight. 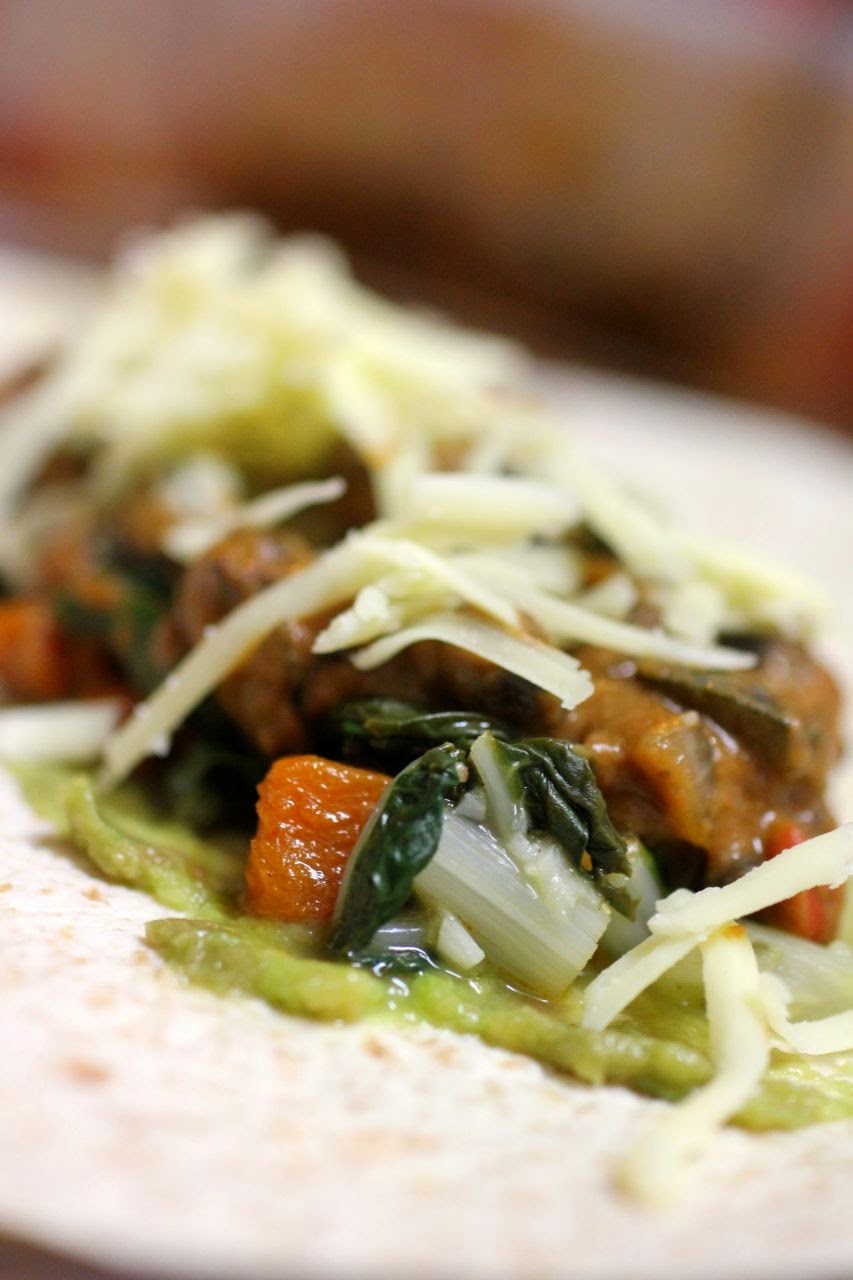 I made these beans a couple of months ago.  It was on a serendipitous weekend.  I decided to go to Fairfield Farmers Market and we were passing Sylvia's kinder friends on the way home so we dropped in.  The following day we caught up with one of her school friends (A) and went to the park.  While another school friend (D) turned up who had been on an overseas trip.  The little girls were delighted to catch up and huddled under one of the large oak trees doing secret little girls business while the parents all caught up.  Eating a good bean stew was an excellent end to a lovely weekend. 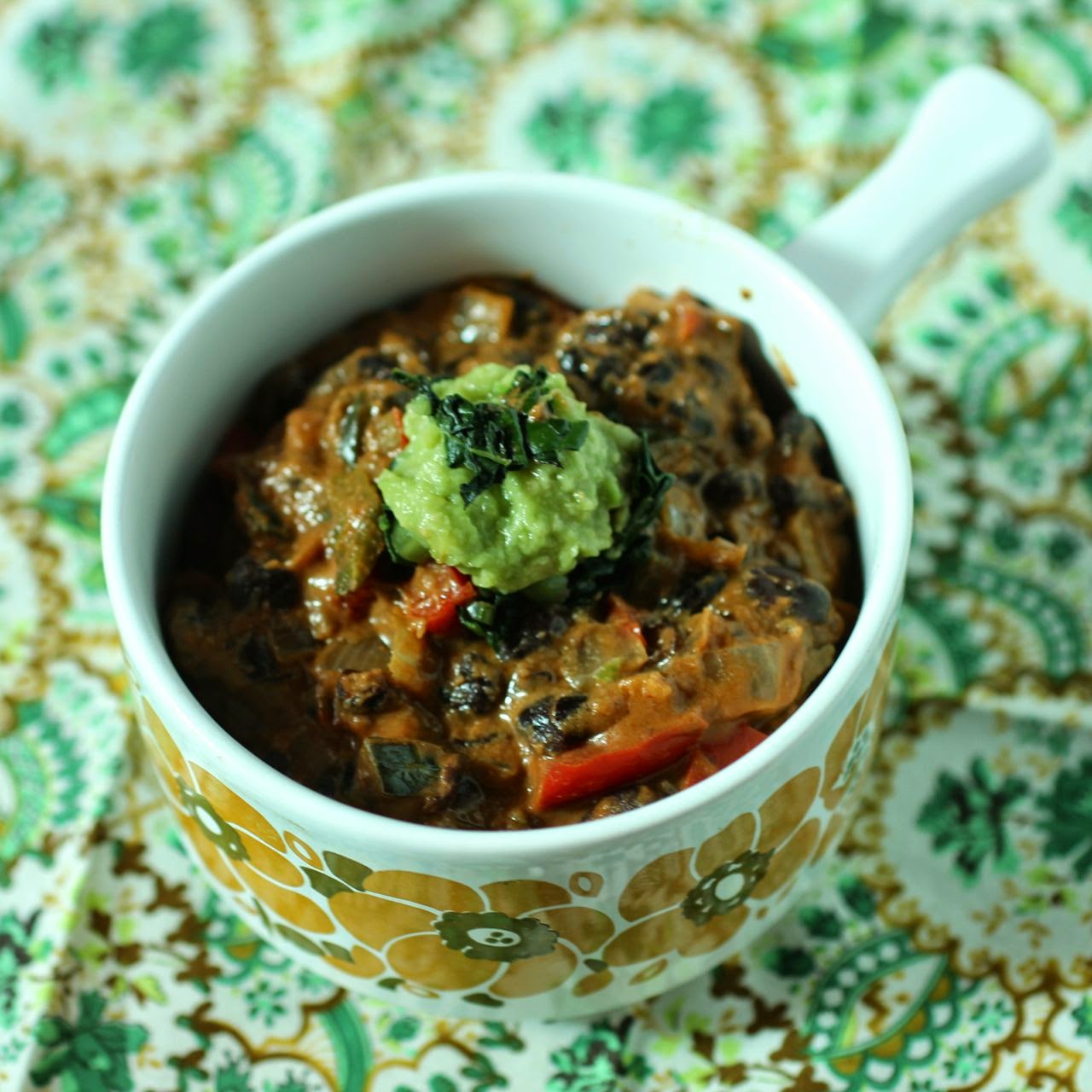 Fry onion and carrots in oil over medium heat for a few minutes while you chop the capsicum and chillis.  Stir in capsicum and chillis and fry for about 5 to 10 minutes.  The vegetables should be softening.  Add the garlic and cumin and stir for about a minute.  Stir in the tomato paste until it starts to brown.  Deglaze with the beer for a minute or two.  Add remaining ingredients.  Simmer uncovered for 15 to 25 minutes until mixture has thickened and flavours meld.

On the Stereo:
Blue: Joni Mitchell
Posted by Johanna GGG at 17:12