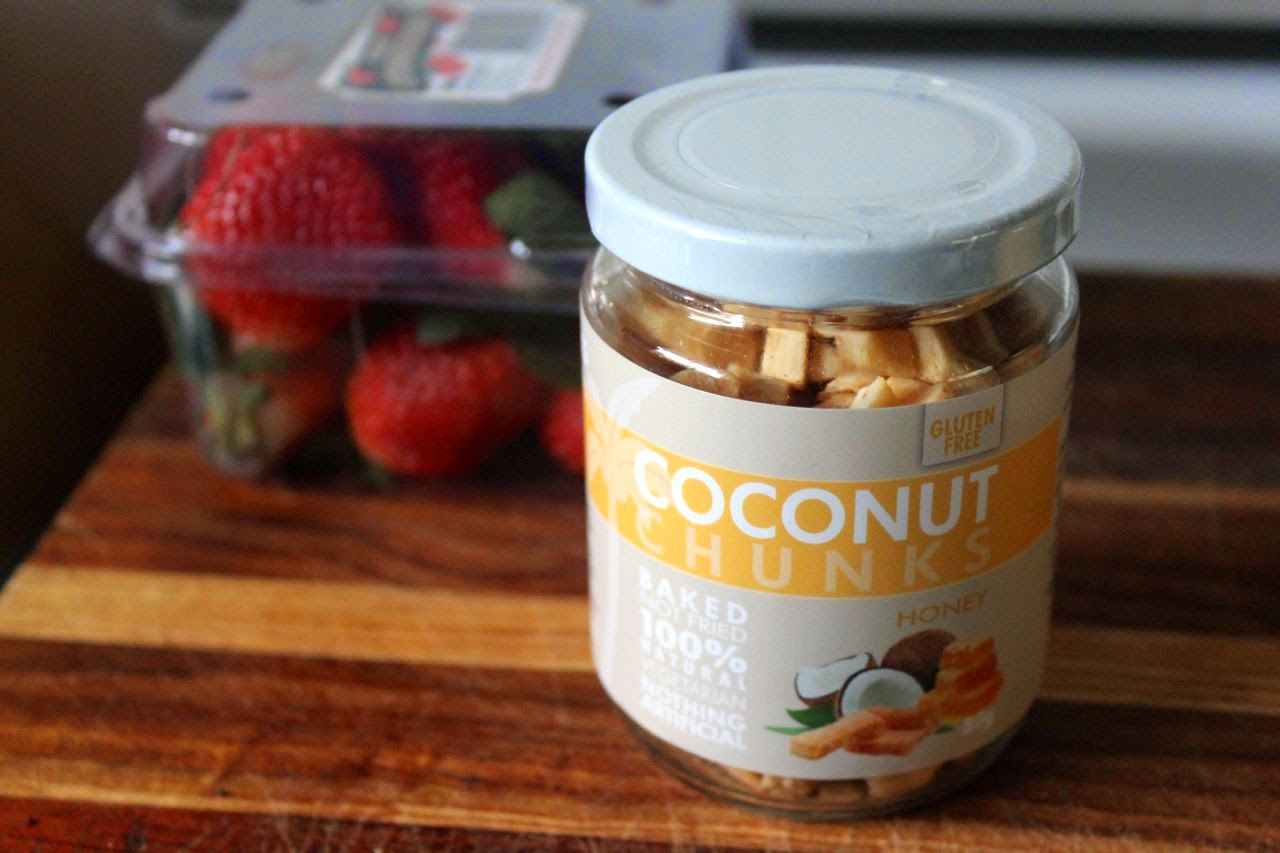 In My Kitchen I have just finished this amazing jar of honey flavoured coconut chunks.  We bought them along with the strawberries at Geelong Fresh Foods when I visited my parents recently.  I expected chewy chunks but these shatter in your mouth and are very addictive.  I thought of adding them to muesli or slices.  There was nae chance.  They went too fast. 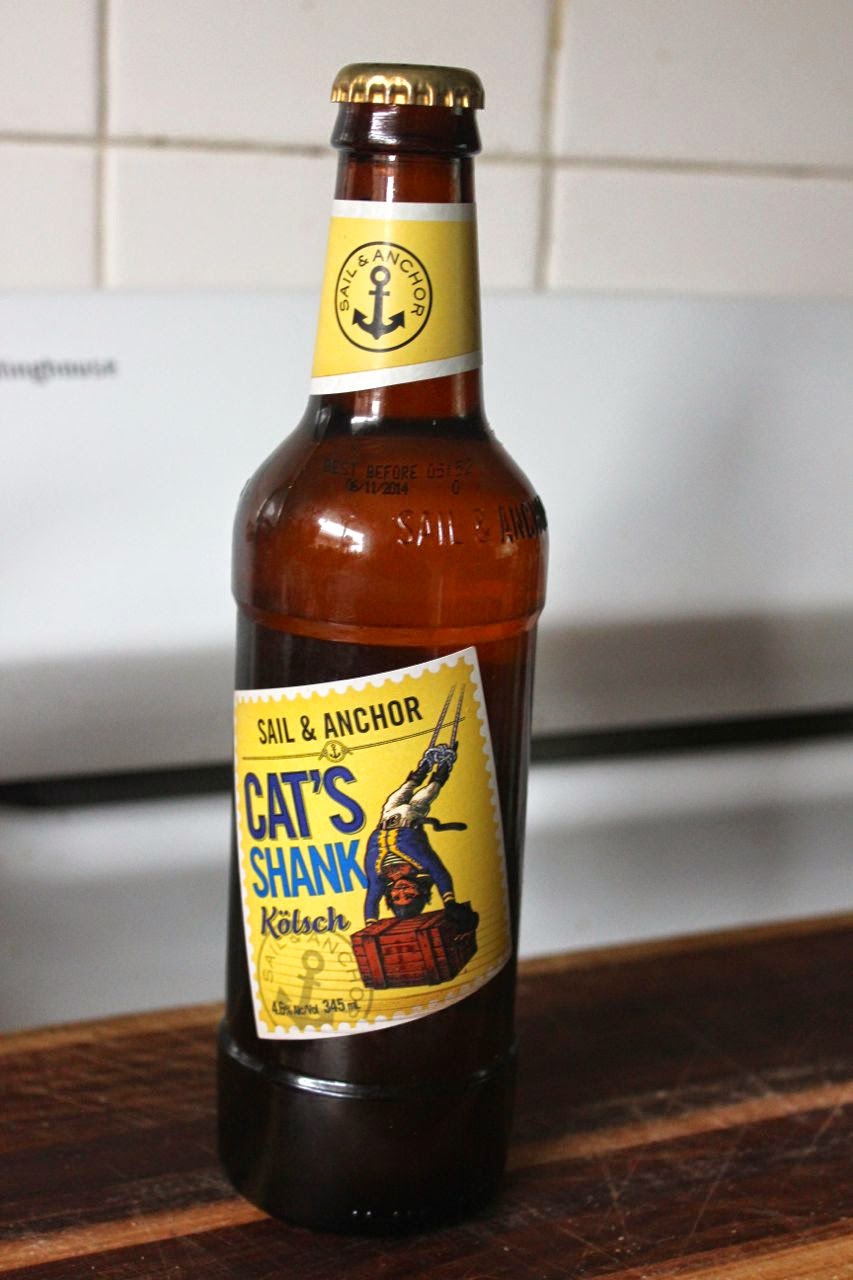 In my kitchen I have some of this Sail and Anchor's Cat's Shank kolsch from Fremantle, Western Australia.  I bought it to try the beer soaked sweet potato fries in A Vegan Dinner Party e-book that I reviewed recently.  I soaked them for 1 hour rather than 15 minutes and they tasted very strongly of beer.

I wasn't sure what to do with the leftover beer and stuck it in the fridge.  I used it for a second batch of fries.  The first half was too soft because we were in a hurry to eat and the second lot were forgotten.  I have been wondering about baking something like beer bread with the last of the beer. 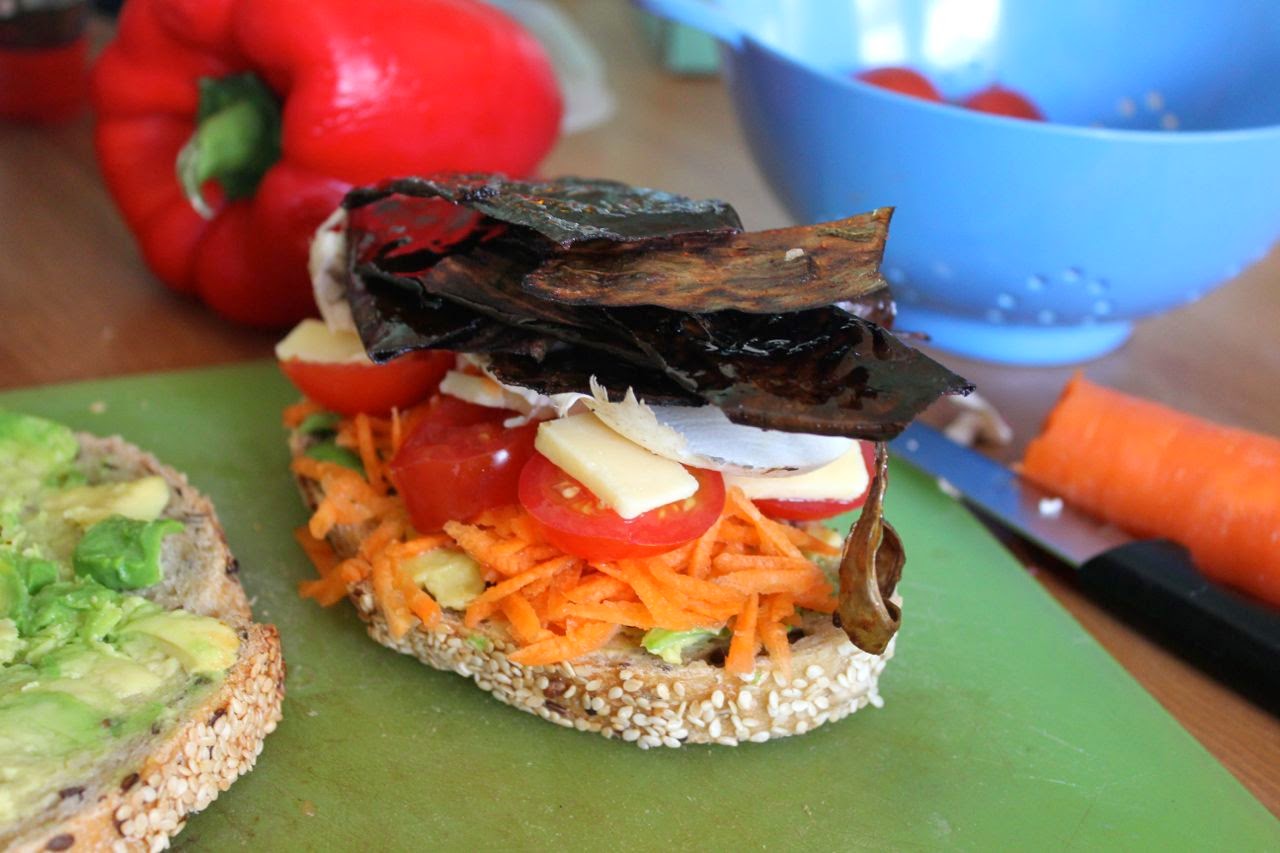 In my kitchen I also had some leftover eggplant skin from a tamarind eggplant and chickpea dish from A Vegan Dinner Party.  It seemed a shame to waste it.  I used a similar marinade to our favourite tofu bacon one - some tamari, maple syrup and smoked paprika - and fried it up.  It made a lovely crisp facon in a salad sandwich. 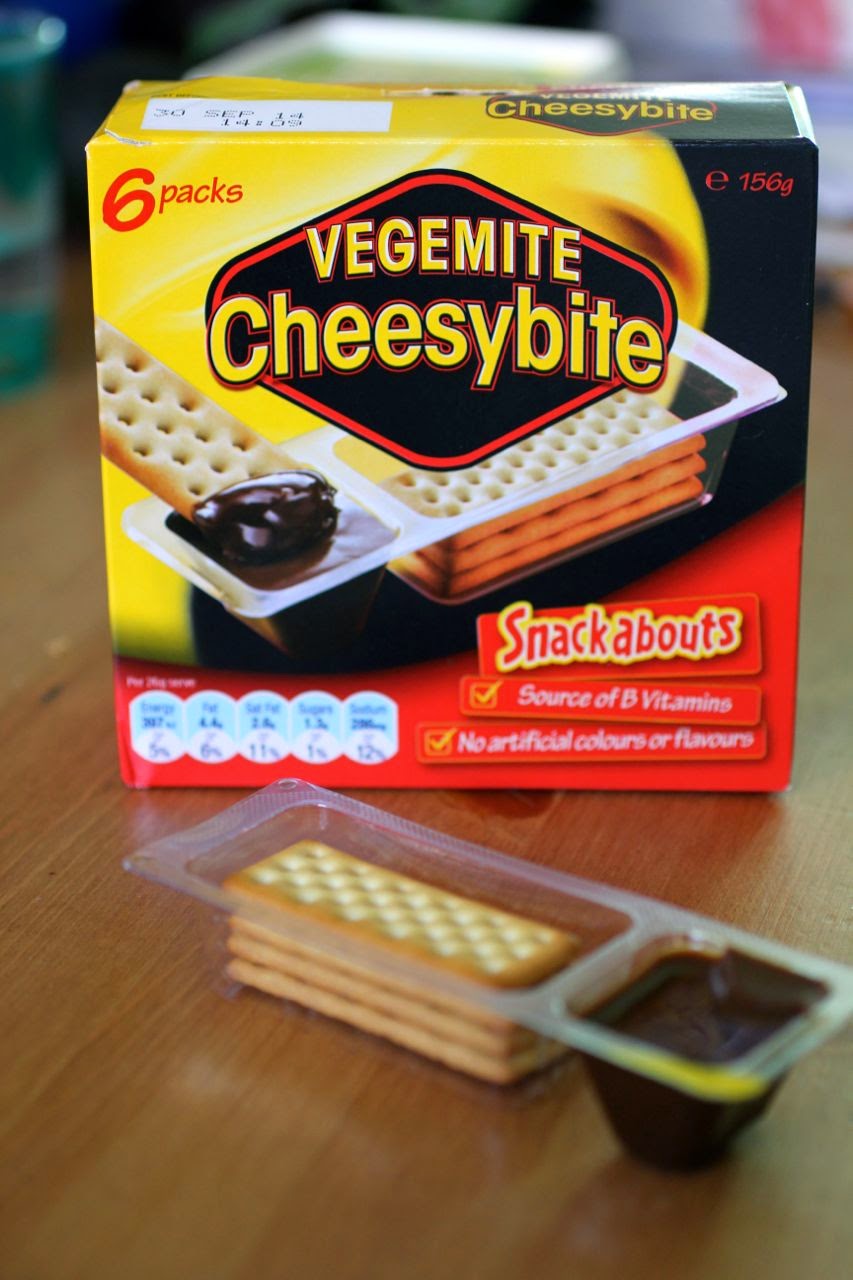 In my kitchen we have been enjoying Cheeseybites.  Little packet each have a mixture of vegemite and cream cheese and some dipping crackers.  Sylvia loves them.  They are great for school lunchboxes or snacks after swimming lessons.  I quite like them but would not recommend them to anyone who didn't have a fine appreciation of vegemite. 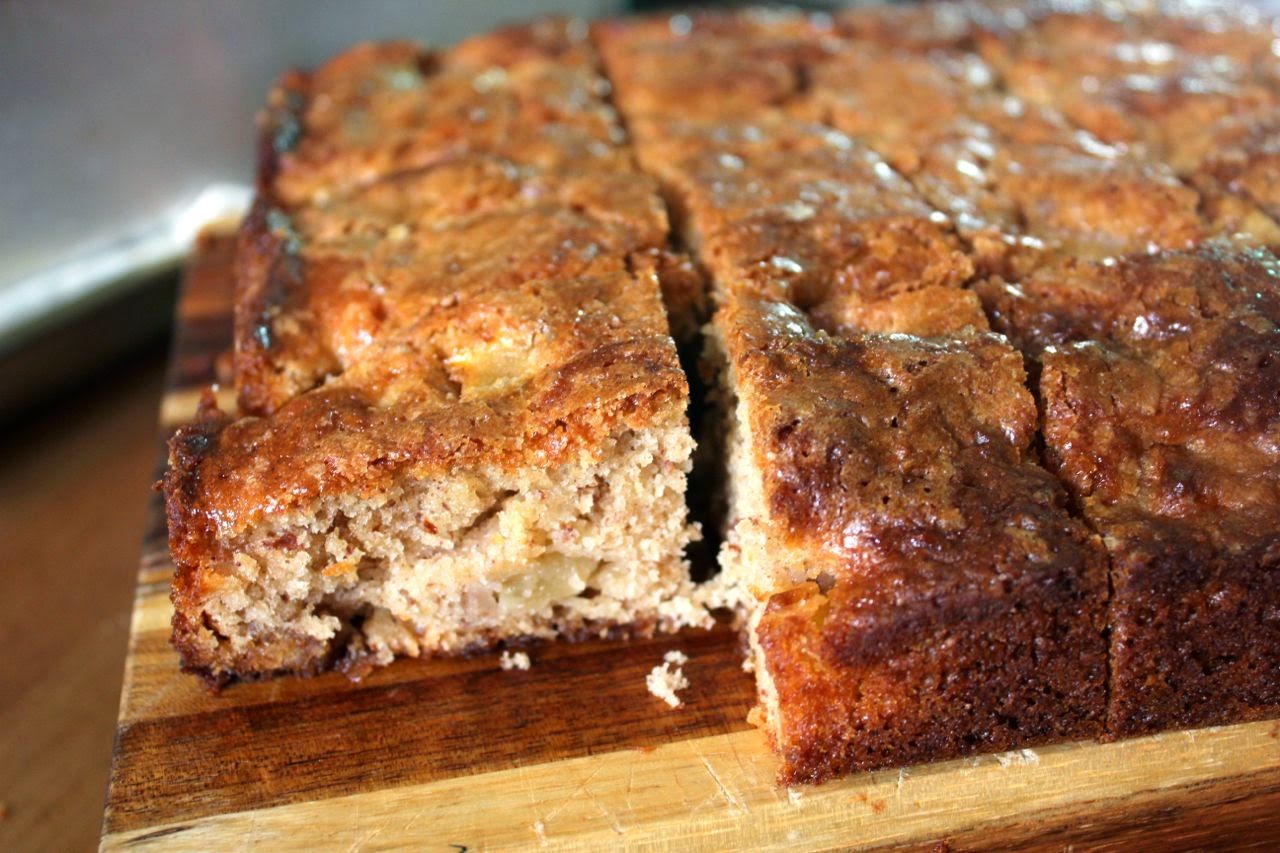 In my kitchen we have another huge batch of Herman the German apple cake (see a photo of the previous batch) in the freezer.  This time I added ground almonds instead of some of the flour.  Then I remembered our school was nut free.  Fortunately around this time someone mentioned that it is not actually a nut free school - though they encourage nut free food.  (Which may be why I got it wrong!)  So I was able to send Sylvia to school with a piece in her lunchbox.  A policy on nuts is being considered so this may change. 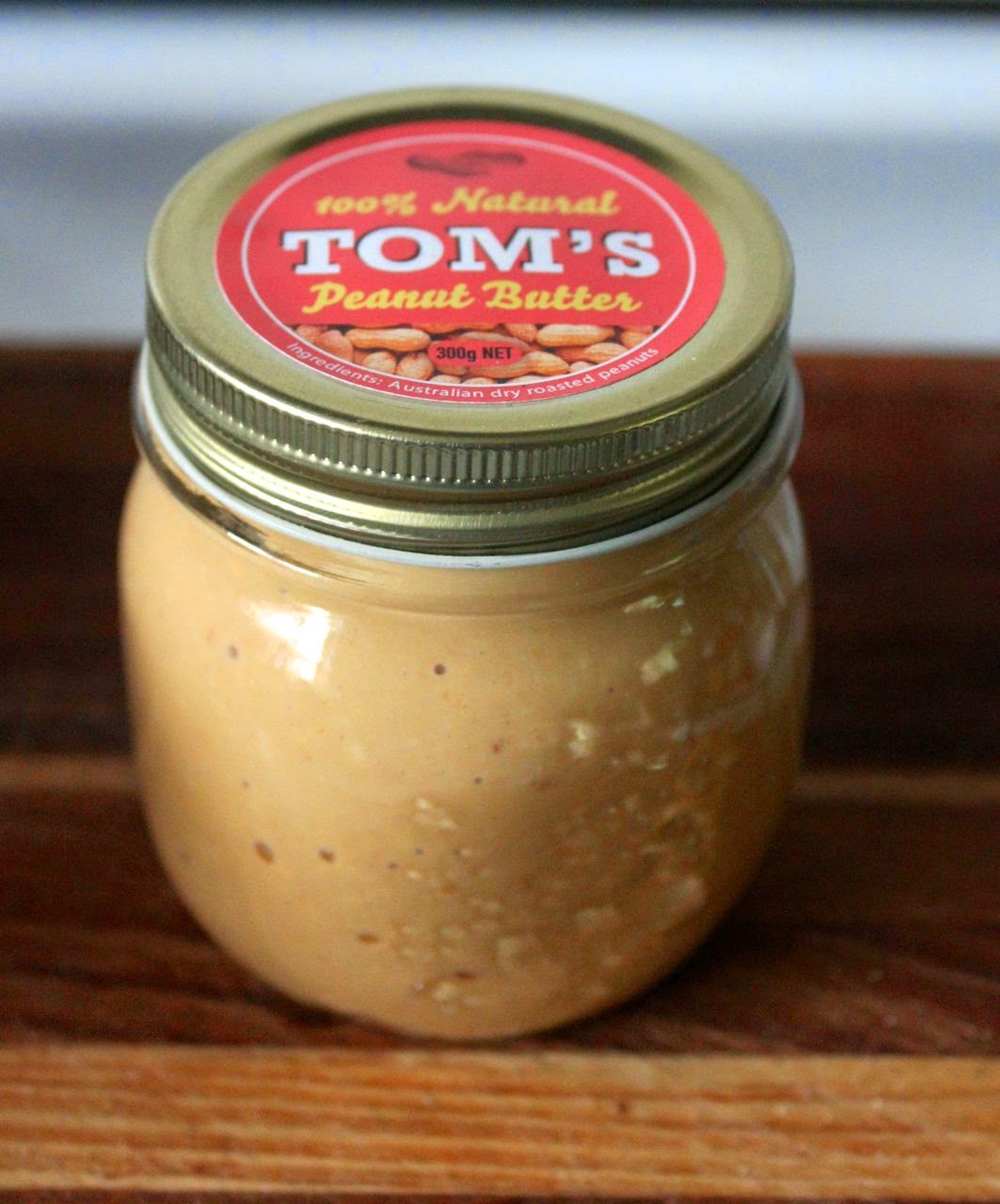 I have always loved peanut butter (and my mum recently told me that it was my dad's side of the family who loved it) but we do have to exercise some caution with Sylvia's peanut allergy (sob!)  Thank goodness it is not severe enough to cause anaphylaxis.  It would be lovely if we could get a date at the Royal Children's Hospital to get her allergy retested.  We have been waiting 7 or 8 months for an appointment for a test. 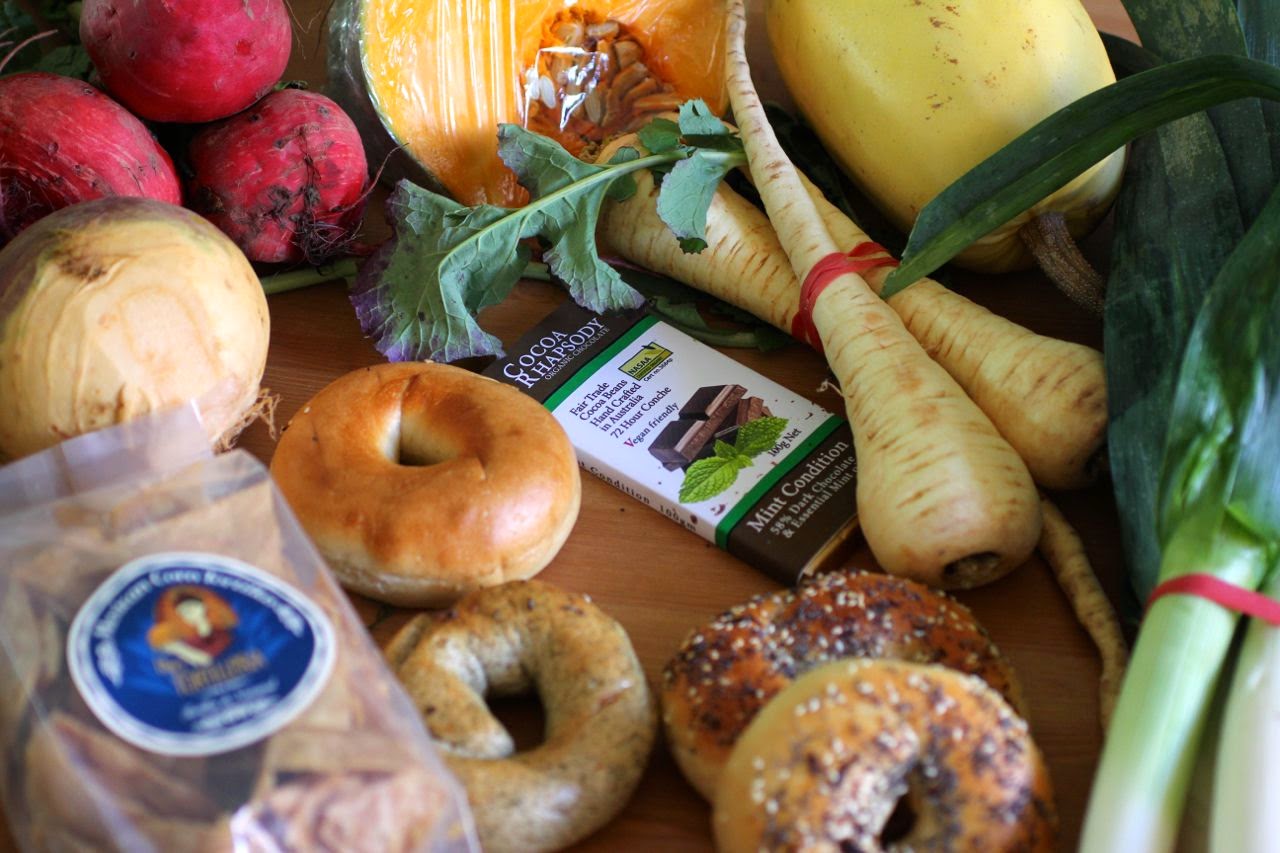 In my kitchen are goodies I bought at Coburg Farmers Market when I visited with Veganopoulous.  I have already made nachos with the tortilla chips.  I am still planning to make some barley soup with the vegetables but yet to decide what to do with the spaghetti squash and the choggia striped beetroot.  Eating the mint chocolate will not be a chore.  We always have to go there to taste and purchase chocolate from the nice lady at Cocoa Rhapsody.

The 5 and dime bagels from the farmers market are superb.  I could just live on them.  When we got home from the market I made E and I up some salad rolls with the bagels.  E had one with mixed seeds and onion on it.  I had the dill and onion bagel.  Inside was mayonnaise, spinach, grated carrot, red capsicum, swiss cheese and tofu bacon.  It was so so good. 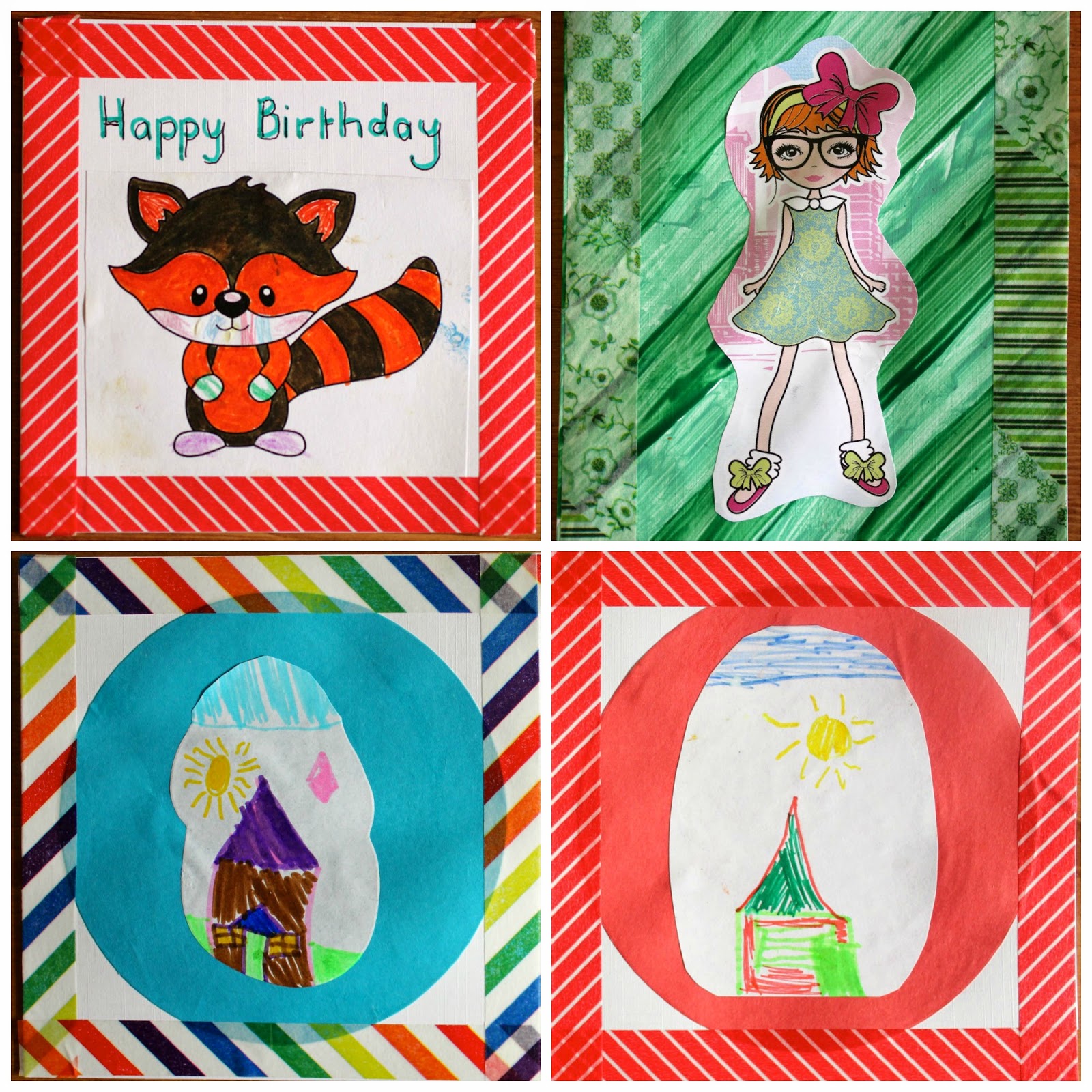 In my kitchen we have been making birthday cards.  We've been to a few parties lately.  I have been collecting some pictures of Sylvia's - her drawings, colouring in and wrapping paper.  A picture and some washi tape around the border make for a quick and colourful birthday card.

I am sending this post to Celia at Fig Jam and Lime Cordial for her In My Kitchen event.  Head over to join in and/or check out what is happening in other bloggers' kitchens.
Posted by Johanna GGG at 20:52