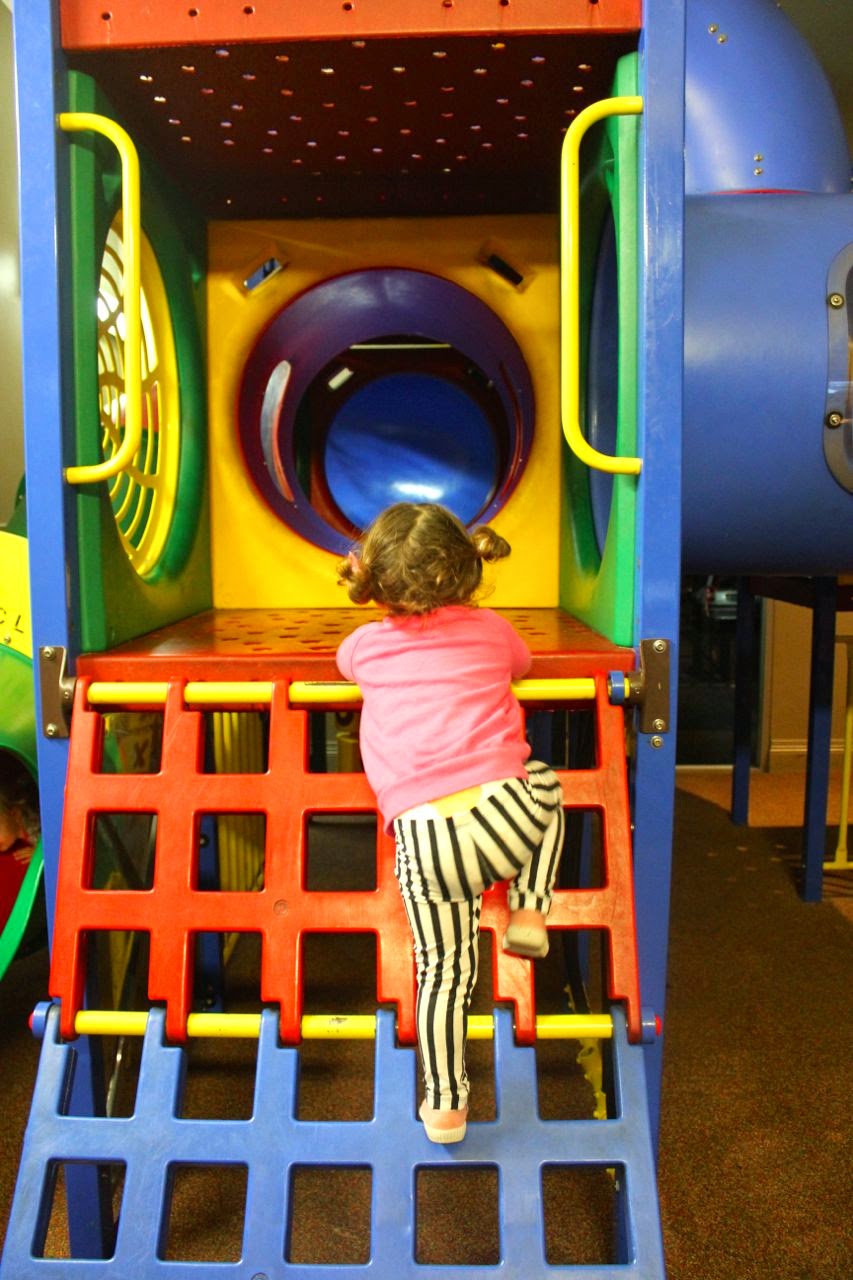 I mentioned that I was tired on Sunday morning.  By that stage of the weekend I had already eaten out at the Grovedale Hotel and Federation Square, visited Newtown Farmers Market, looked over Treasury Buildings as part of Open House Melbourne,  and viewed the lights at the Gertrude Street Projection Festival, as well as spending time in Geelong (out of town) with family.  So here is a little more information of what I got up to. 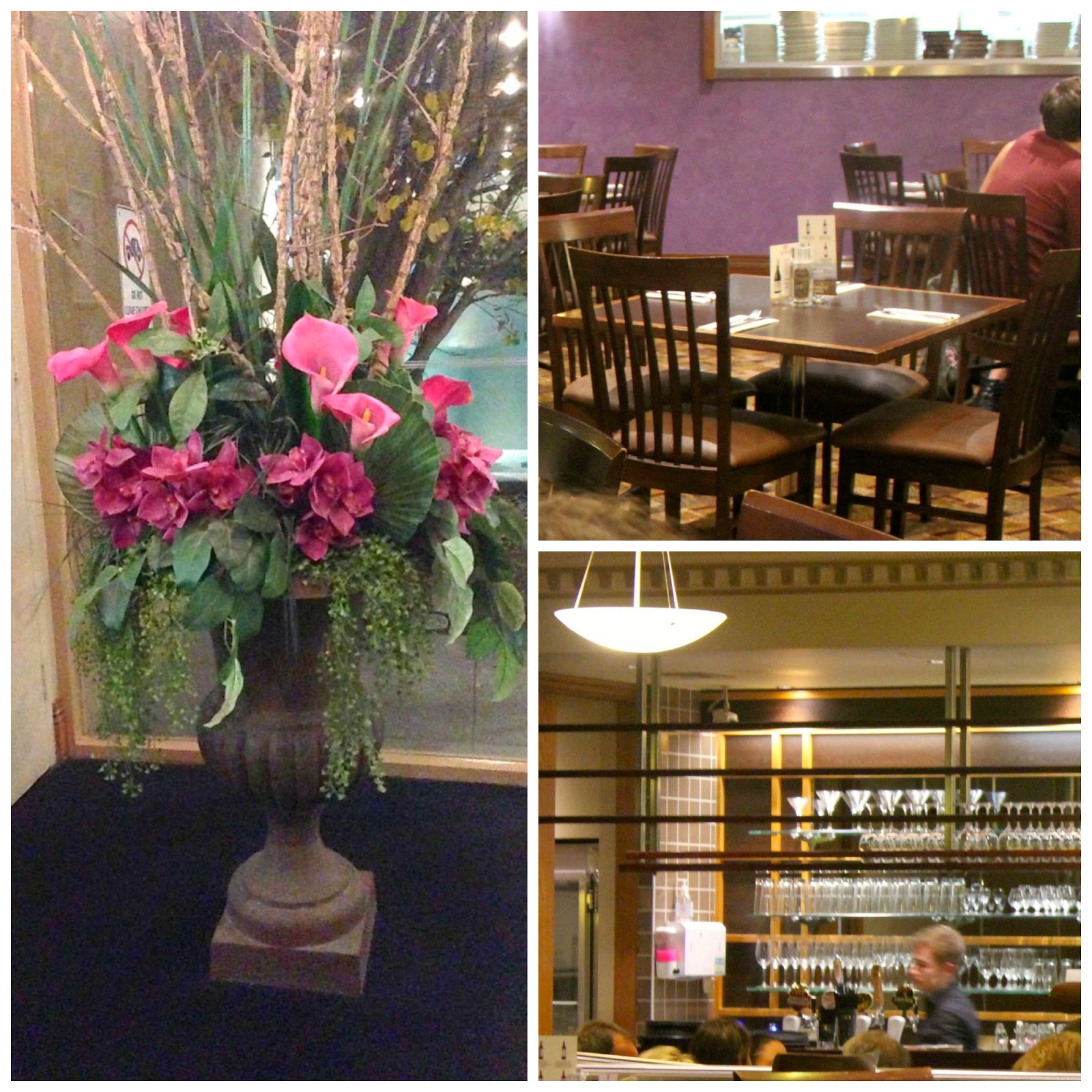 On Friday night we drove down to Geelong after Sylvia had finished school.  We had a family birthday dinner at the Grovedale Hotel (236-236-258 Torquay Road, Grovedale tel: 03 5243 2814). It was my first visit but I think other family who live down that way have been there before.  We were greeted with a huge urn of flowers and some fancy modern gates.  Portofino's restaurant is very modern and well lit with none of the clutter that you might associate with traditional pubs. 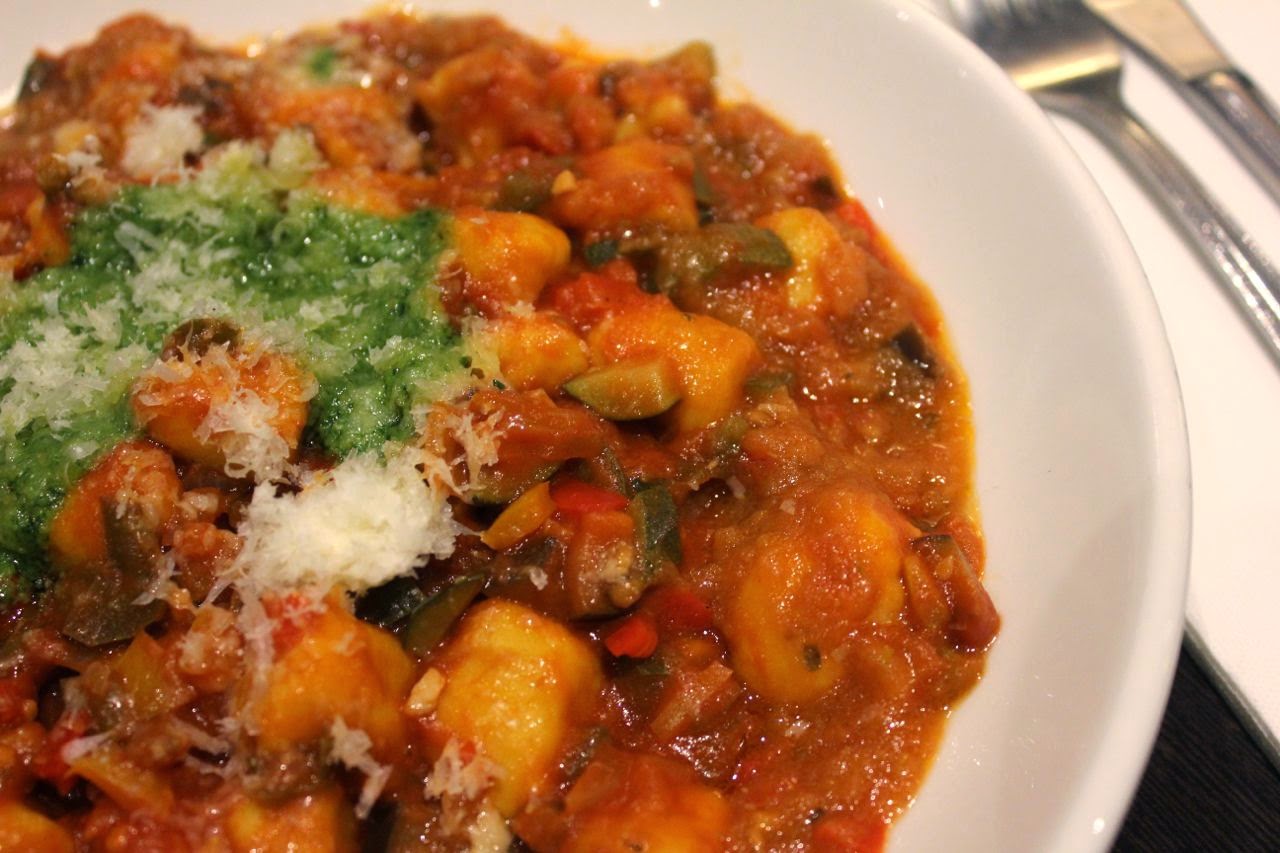 At first glance I was not overly impressed by the menu which only had a vegie stack offered for vegetarians.  I have had too many bad vegie stacks to ever be enthused at the prospect.  Then I saw there was a pumpkin gnocchi with basil and cashew pesto, ratatouille and roast tomato vinaigrette.  I was delighted to have a gnocchi that wasn't just rich and stodgy.  Packed with a generous amount of vegies, this gnocchi was very filling and full of flavour. 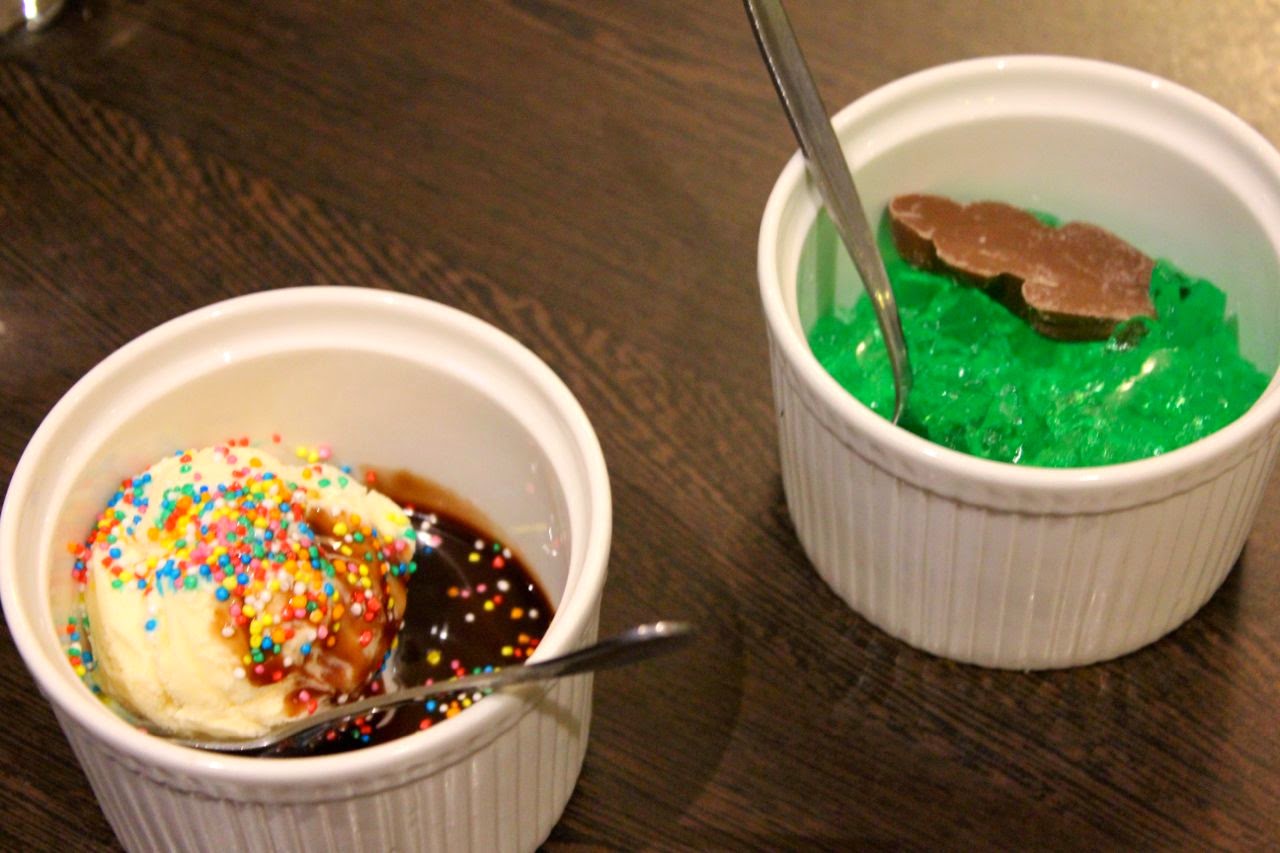 The hotel catered well to children with a kid''s menu - as usual it doesn't really cater to vegetarian kids.  Sylvia is happy with a bowl of chips (but I try to give her some decent food beforehand to balance out her meal).  For dessert, she had the frog in a pond - a chocolate frog in a pond of green.  I loved it when I was young just as much as she does now.

I was impressed that although dessert orders were taken all at once, the kids' desserts arrived first.  Generally the service was friendly and thoughtful.  When not eating chips and chocolate frogs, Sylvia had a lovely time in the kids play area (see her cousin Stella at play in the top photo). 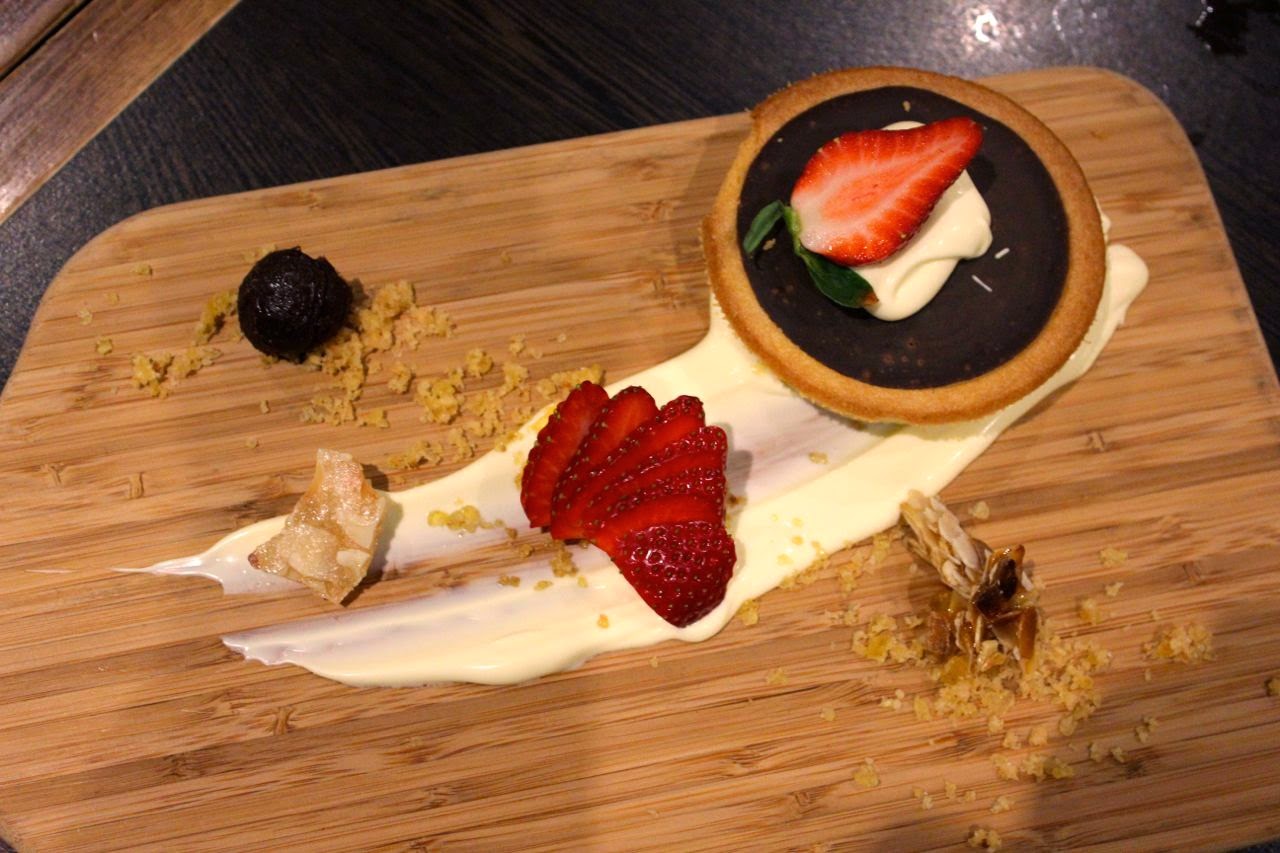 The dessert menu presented a tyranny of choice.  I ordered the chocolate and Baileys tart with double thick cream, almond brittle and fresh strawberries.  It was good - beautifully presented - but I was not keen on it being served on a slick of cream.  (I was the one in my family who never liked cream on any dessert!)  I enjoyed the tart but would have liked it more gooey and less set.  It was very rich - perfect for sharing.

And share we did.  I think I most loved my brother in law John's sticky date pudding because it was warm and sticky and soft and perfect for a winter evening.  I also was very taken with the white chocolate and vanilla cheesecake with honey and macadamia sauce.  My sister Susie had enjoyed it before because it is gluten free and loved it enough to recommend it and order it.  It was indeed a marvellous soft creamy cheesecake but very sweet. 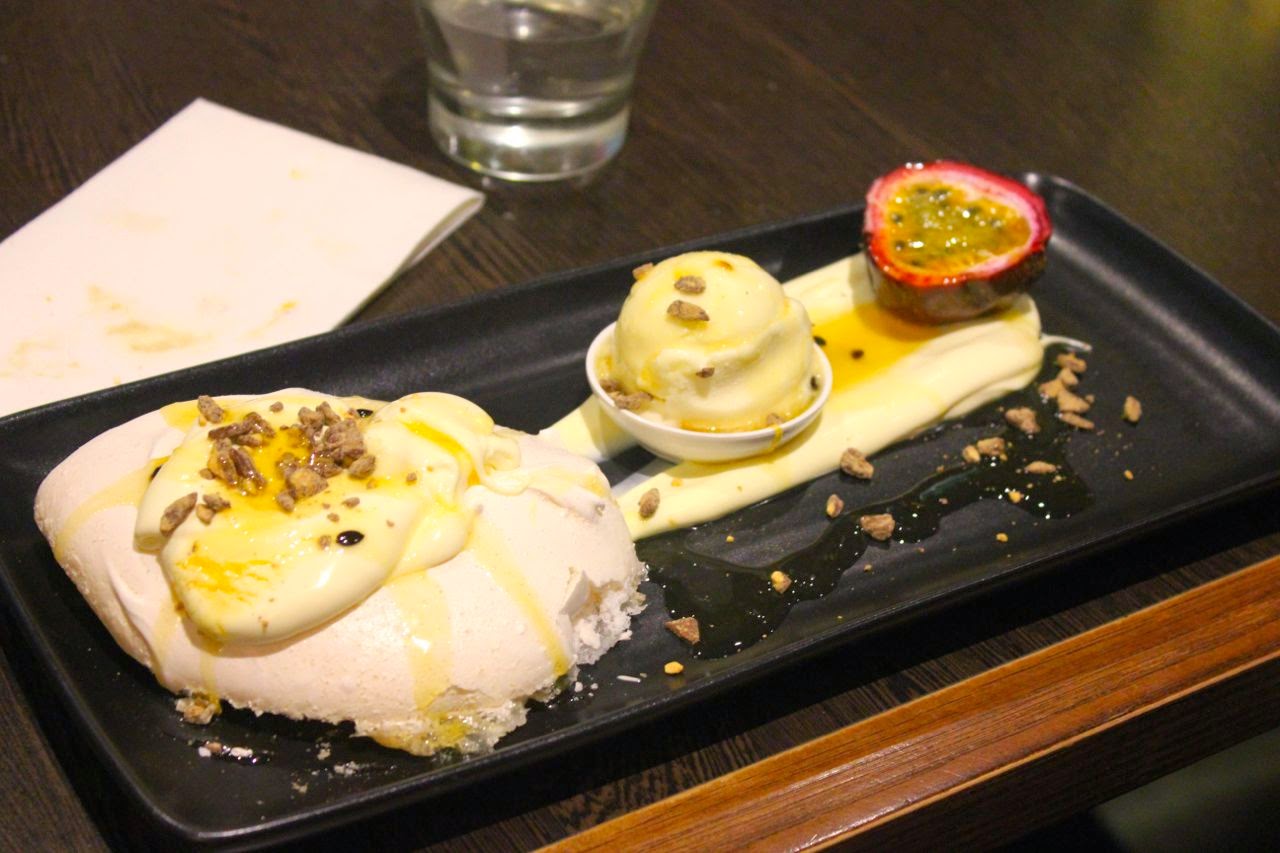 My mum found the whole menu hard to choose from because it offered so much temptation.  Though she wanted many of the dessert options she couldn't pass up "3 ways with passionfruit - pavlova, sorbet and natural".  I think I heard some oohs and aahs from her direction but I got too overwhelmed at wandering spoons and desserts being passed about and didn't taste any.  The other dessert that I didn't taste was Erica's lemon meringue pie.  It looked magnificent and disappeared quickly so I guess it appealed to those who like such desserts.  (Not me!) 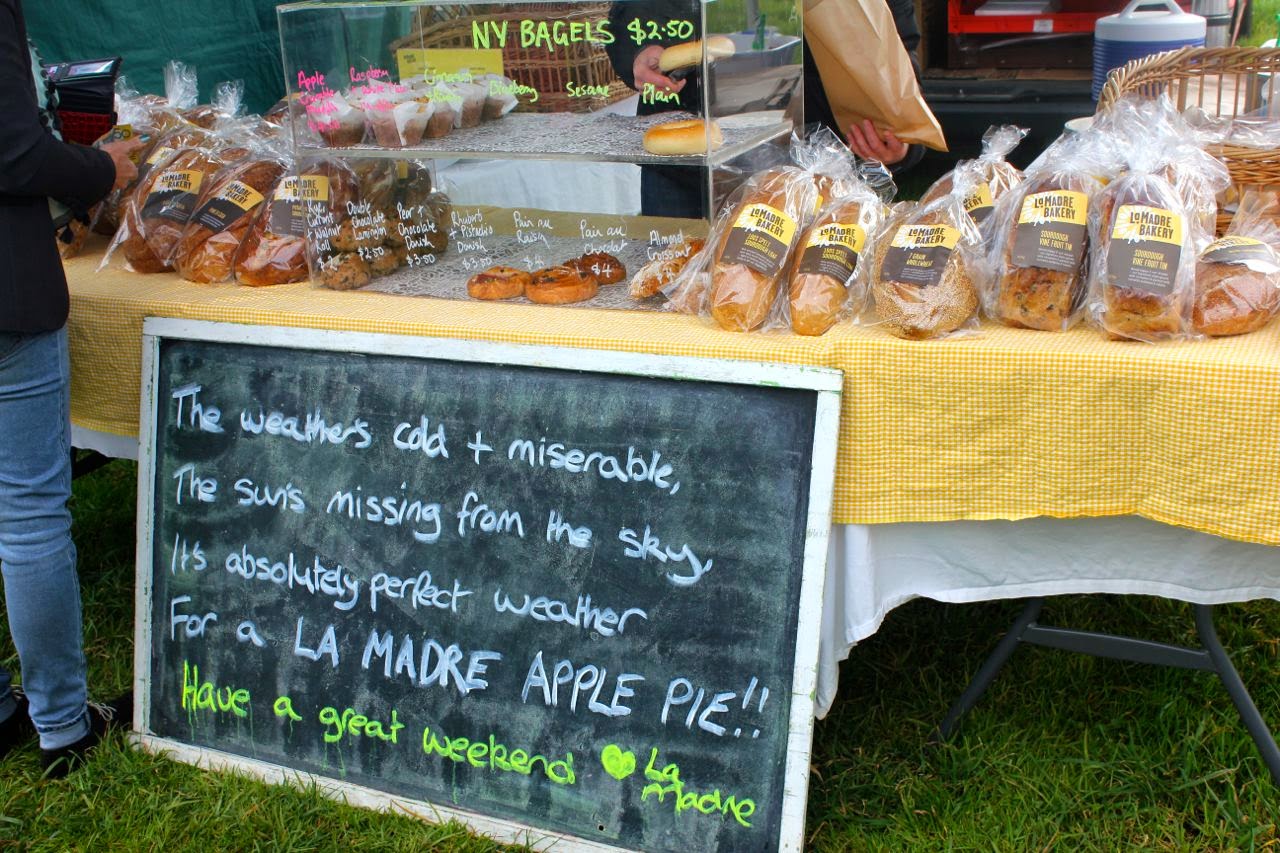 We stayed the night in Geelong and on Saturday morning, made a flying visit to the Newtown Farmers Market (on the corner of Shannon Avenue and West Fyan Rd).  My mum and I just bought a few bits and pieces before she had to meet a friend for coffee.  I headed back to my folks' place where Sylvia was playing with her cousin Ashy.  It was very cute that they were doing drawings for each other.  Ashy's big brother Cooper came over later and played hangman with me. 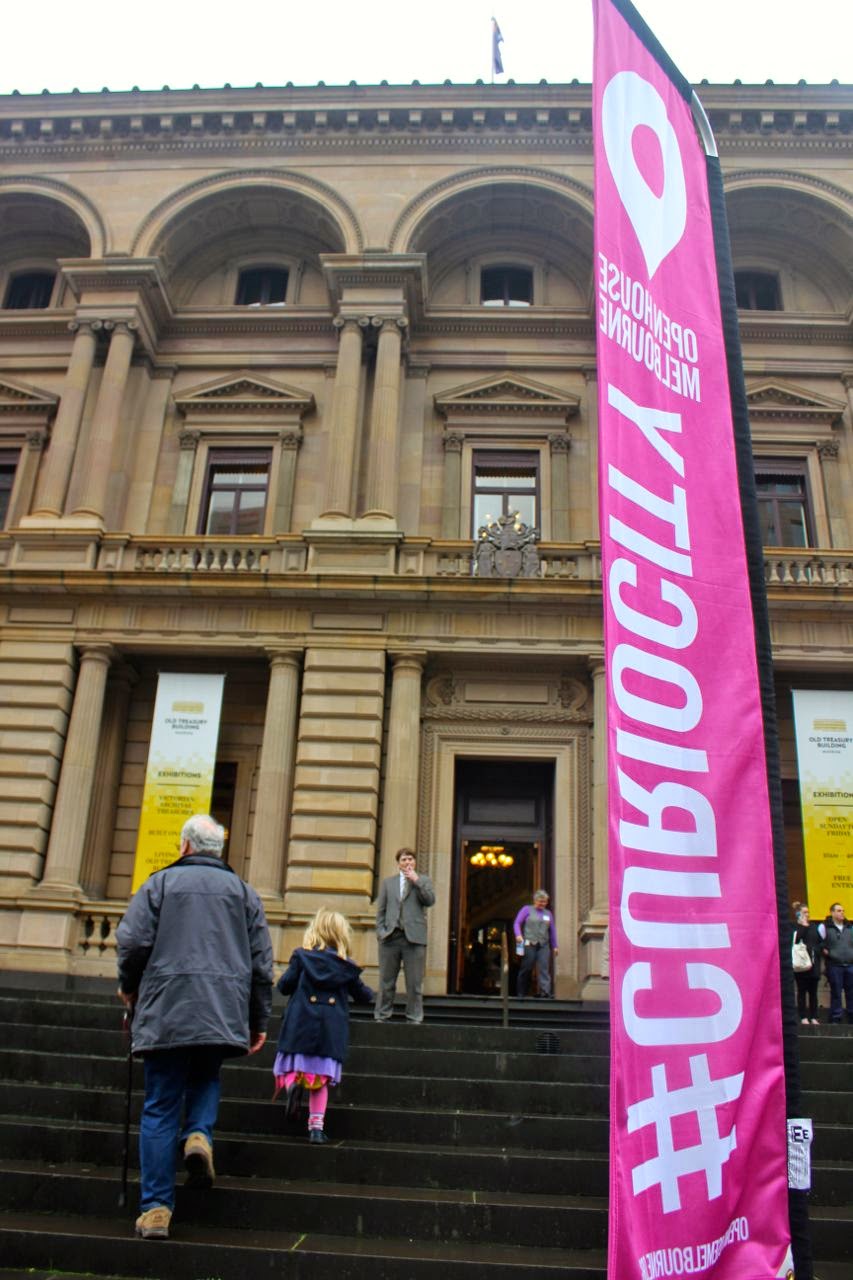 My dad and I had planned to go to Melbourne for Open House and the light displays.  I have visited buildings for Open House Melbourne over the last two years.  A few buildings seemed to have dropped off the list this year but there were still ones that interested me.  By the time we got back to the city, we were too late to queue anywhere and decided to go to the Old Treasury Building.  I visited back in 2008 and enjoyed it enough to return. 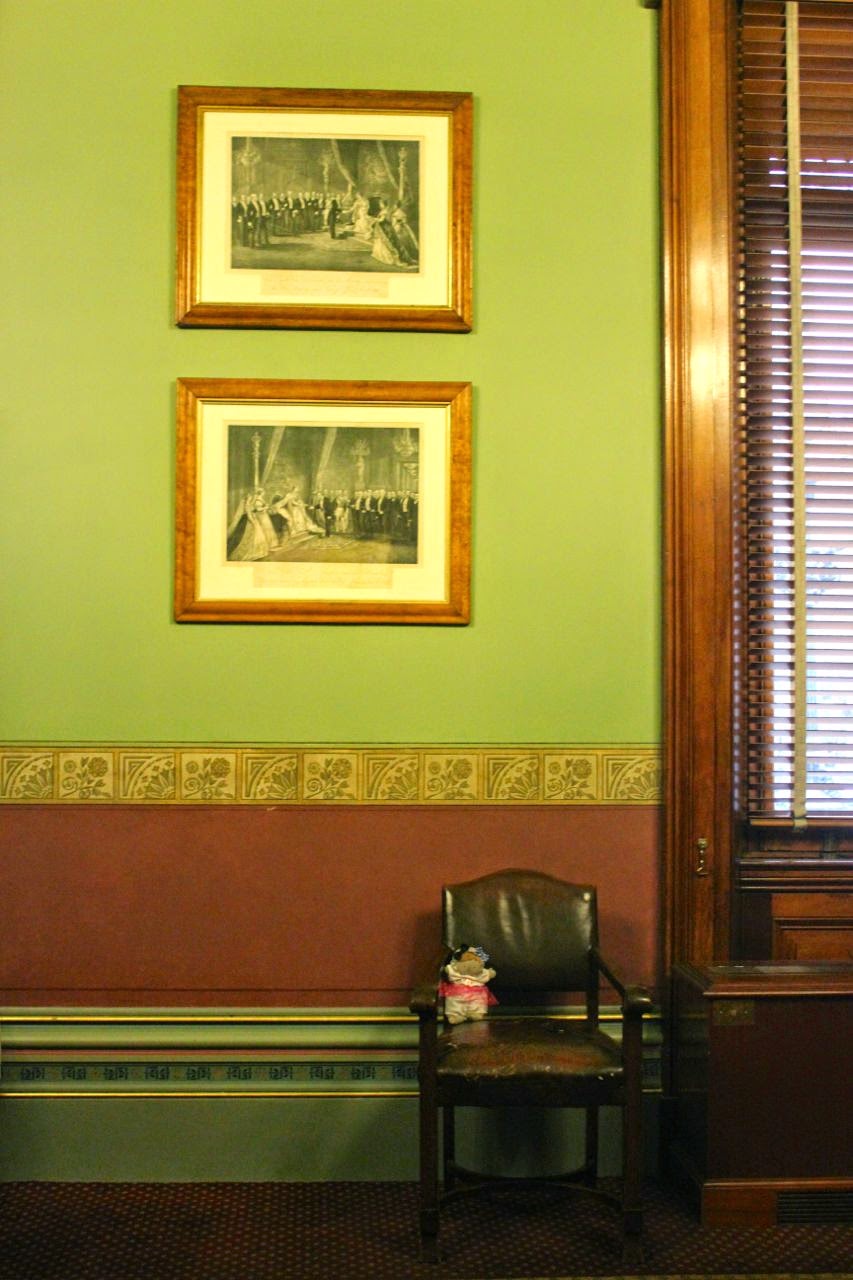 This imposing building was completed in 1862 to store gold from the gold rush.  I don't remember it being quite so busy last time but I do remember the grandeur of the upstairs rooms and the simplicity of the caretaker's family's rooms downstairs.  Sylvia plonked Dolly on a chair upstairs.  My dad and I were amused to see people passing by with quizzical looks. 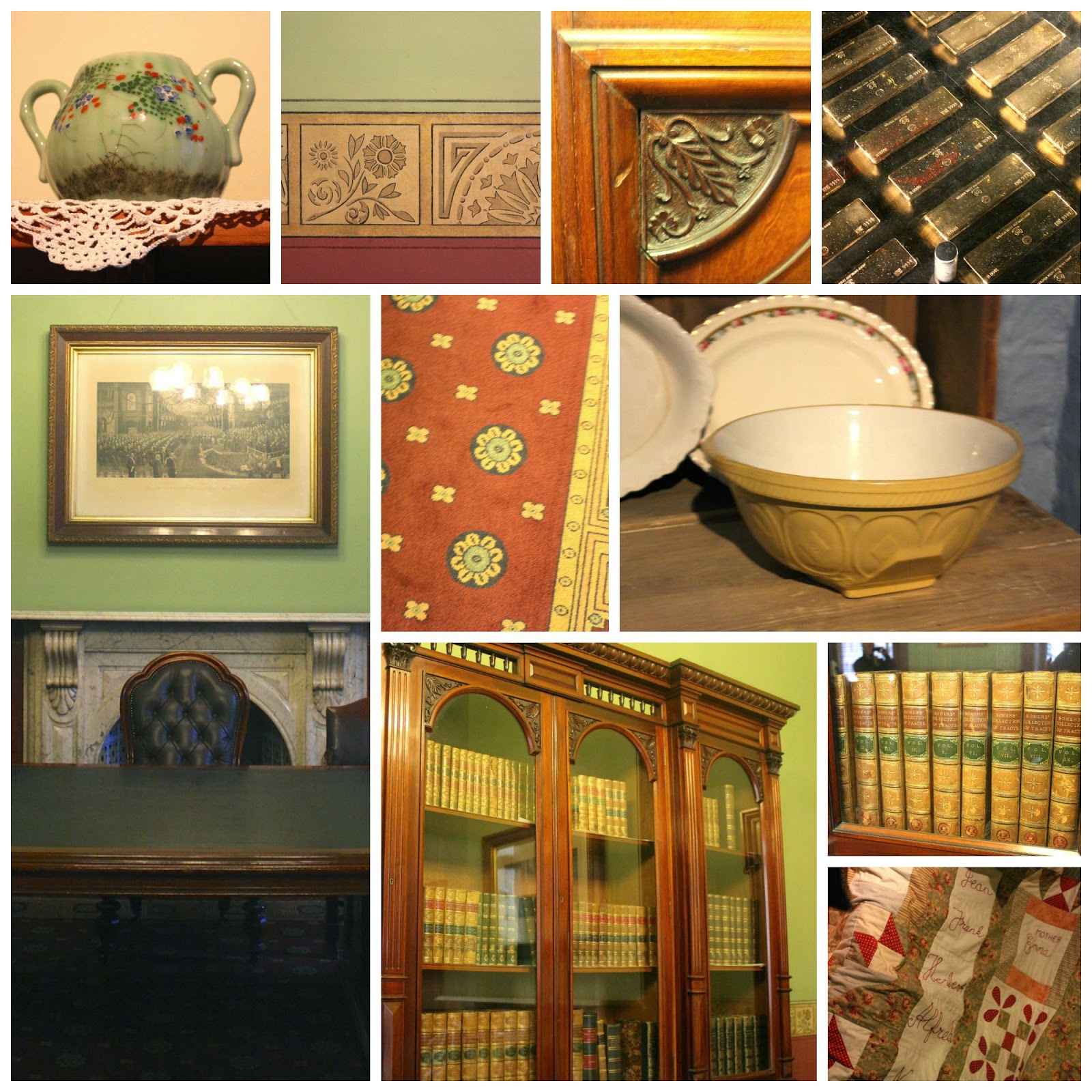 I particularly love the green cooker downstairs which you can see in my food history post.  Possibly Sylvia's greatest curiosity was kept for the caretaker's section when she wanted to see a toilet.  We pointed out the below pot. She was suitably amused. 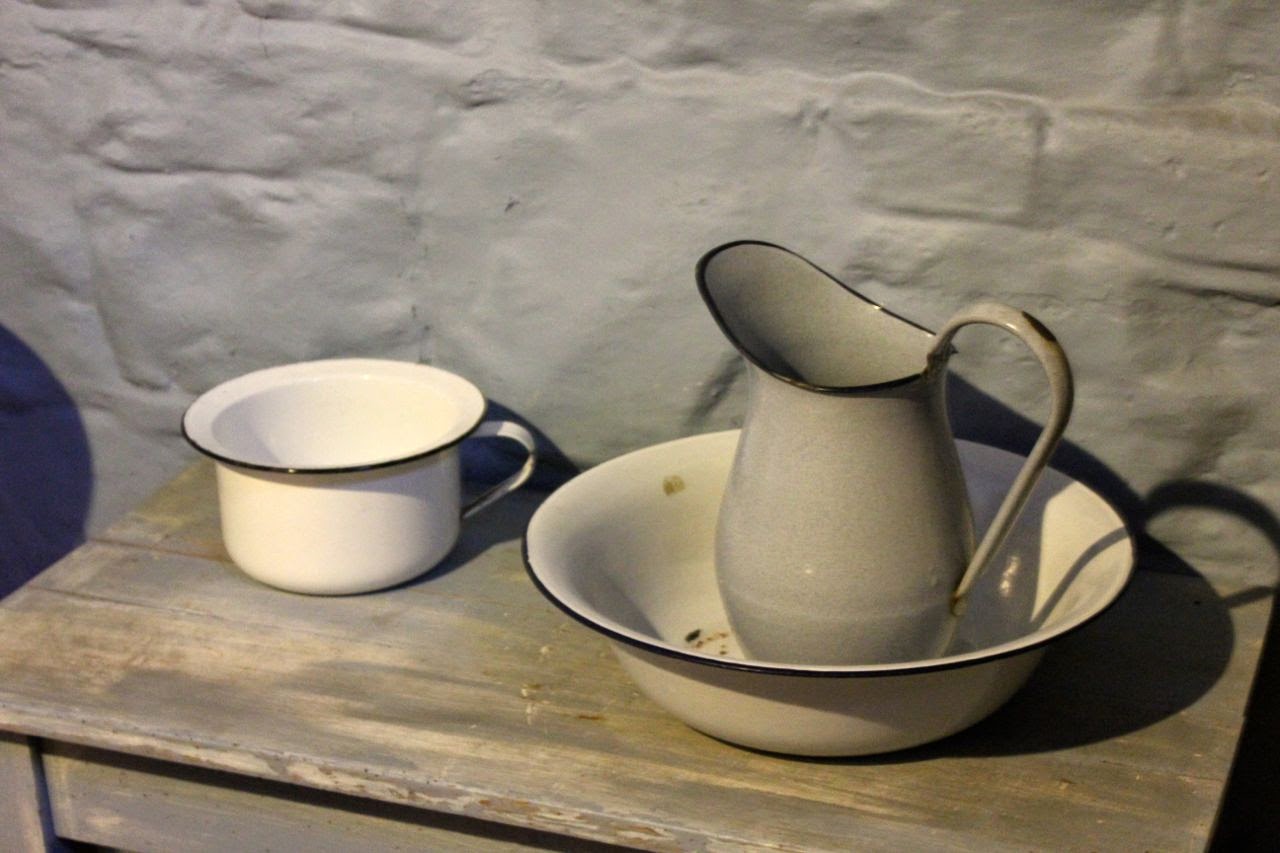 Both upstairs and downstairs also houses some interesting displays about Melbourne's history.  It was so busy and Sylvia was thirsty so we didn't get much of a chance to stop and read.  We did stand on the display of gold bars.  (It has a glass floor over the gold!)  The Old Treasury Building is regularly open as a museum.  I must head back when it is quieter and I have more time. 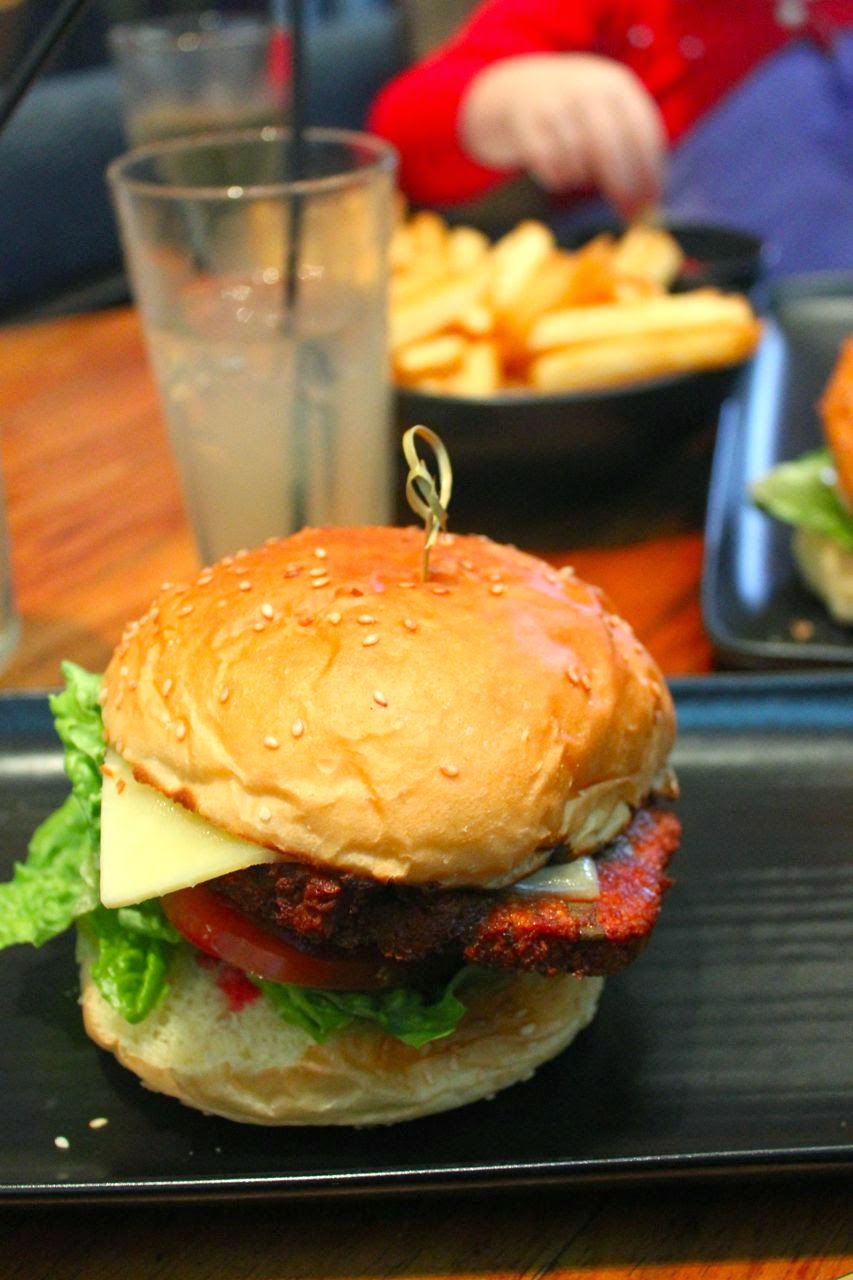 Once we left Old Treasury Building, we did have time because we had decided to wait to see the lights both in the city and in Gertrude Street after 6pm when it grew dark.  While we waited, we sat in the Atrium at Federation Square and had a burger and chips at Beer DeLuxe.  Yet again Sylvia ate chips.  I had a delicious lentil burger with tomato, lettuce, cheese, beetroot and pineapple.  I was surprised that their section that served coffees and ice creams closed at 5.30.  That scuppered our plans of a coffee for my dad and an ice cream for Sylvia.  (Her screams were loud enough to be heard around the world!) 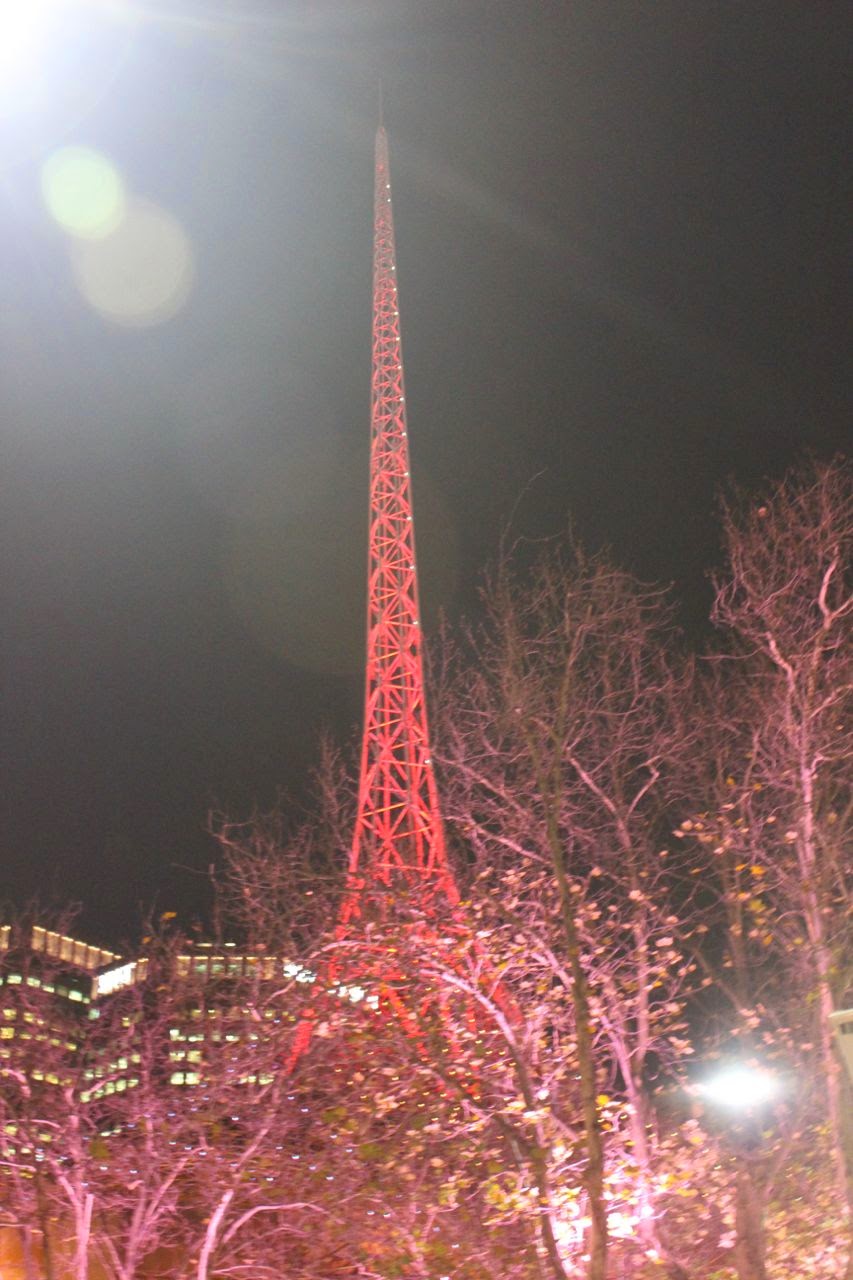 My dad and I were hoping to see the Paint the Town Red light display in the city.  Apparently over 45 buildings are lit red at 6pm in a show of support during the international AIDS 2014 conference.  This was our second journey into the city to see the lights and both times I was disappointed.  The Arts Centre spire (above) was red but my dad and I couldn't work out if St Paul's Cathedral was lit red.  Fed Square and the Town Hall definitely weren't red (though Town Hall was last weekend).  Fortunately we had Sylvia with us and she just loved all the regular lights in the city. 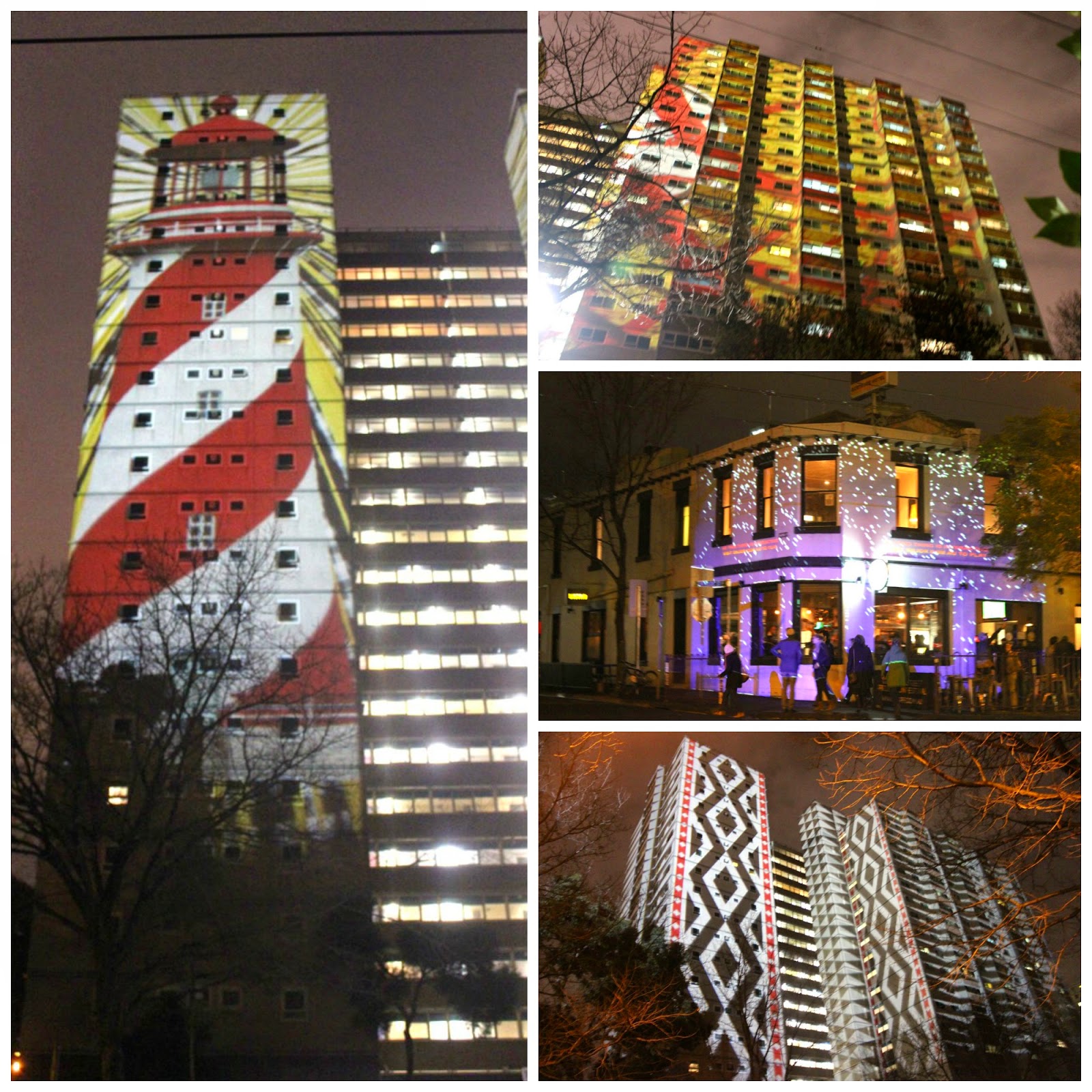 My dad left us then to get his train home.  Sylvia found a shop selling ice creams which cheered her up no end!  With an ice cream in hand (hurrah for cold weather preventing them melting too quickly) we drove to see the Gertrude Street Projection Festival.  These were brilliant.  Different patterns and pictures were projected onto the Atherton high rise towers.  Across the road a pub on the corner of Napier St was lit up with white fairy lights.

We stood on the street corner watching the projections.  The pub projections were actually interactive.  A few people were using their phone to make little dots race about and chase the fairy lights.  The miracles of modern technology!  I really liked the friendly vibes of people standing around on the corner. 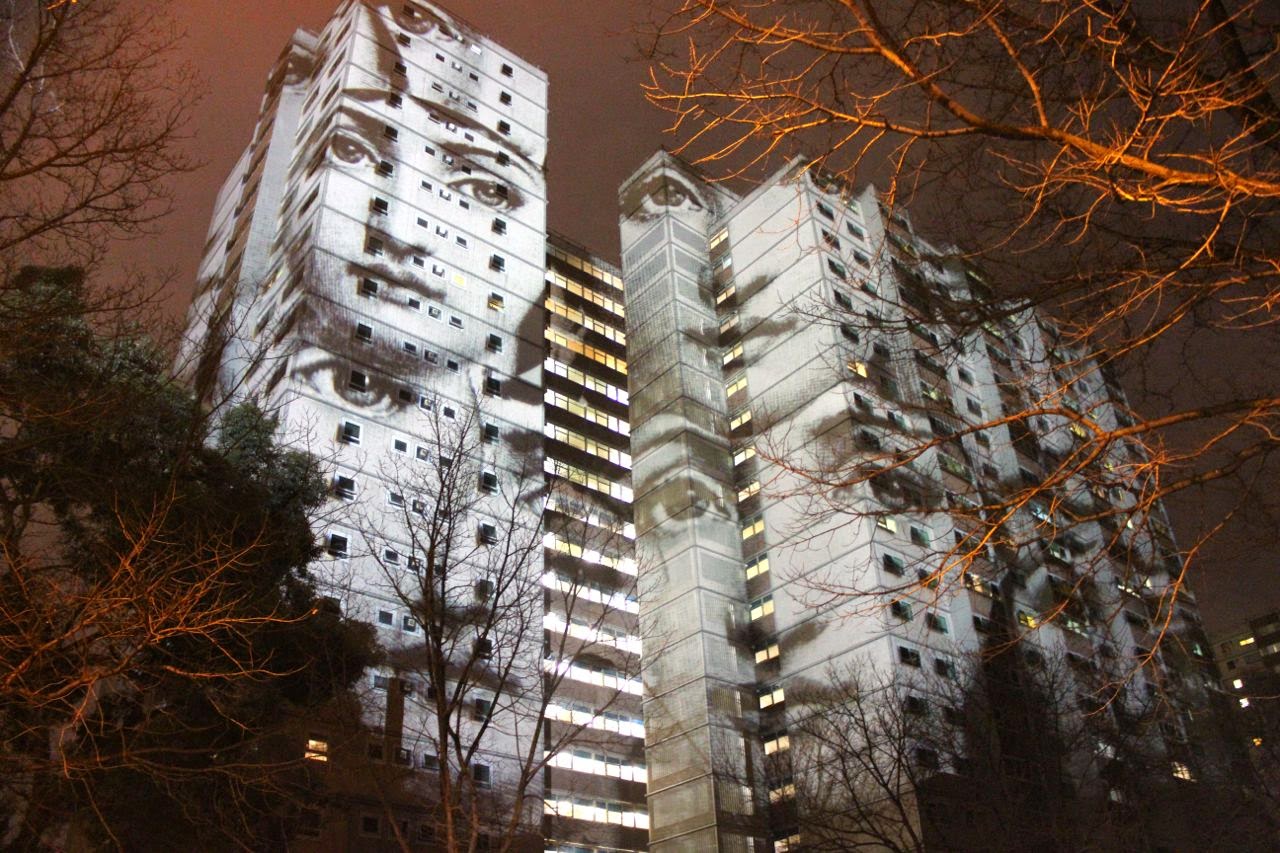 I would have spent more time walking along Gertrude St and then back to the Wilde cafe at the corner of Napier St for a mulled wine but it was Sylvia's second late night and we had to get home.  We drove home singing Frozen songs and feeling very tired.

The projection festival has finished but there is information about other city projects in this article or check out the Melbourne Public Art Program.
Posted by Johanna GGG at 10:52