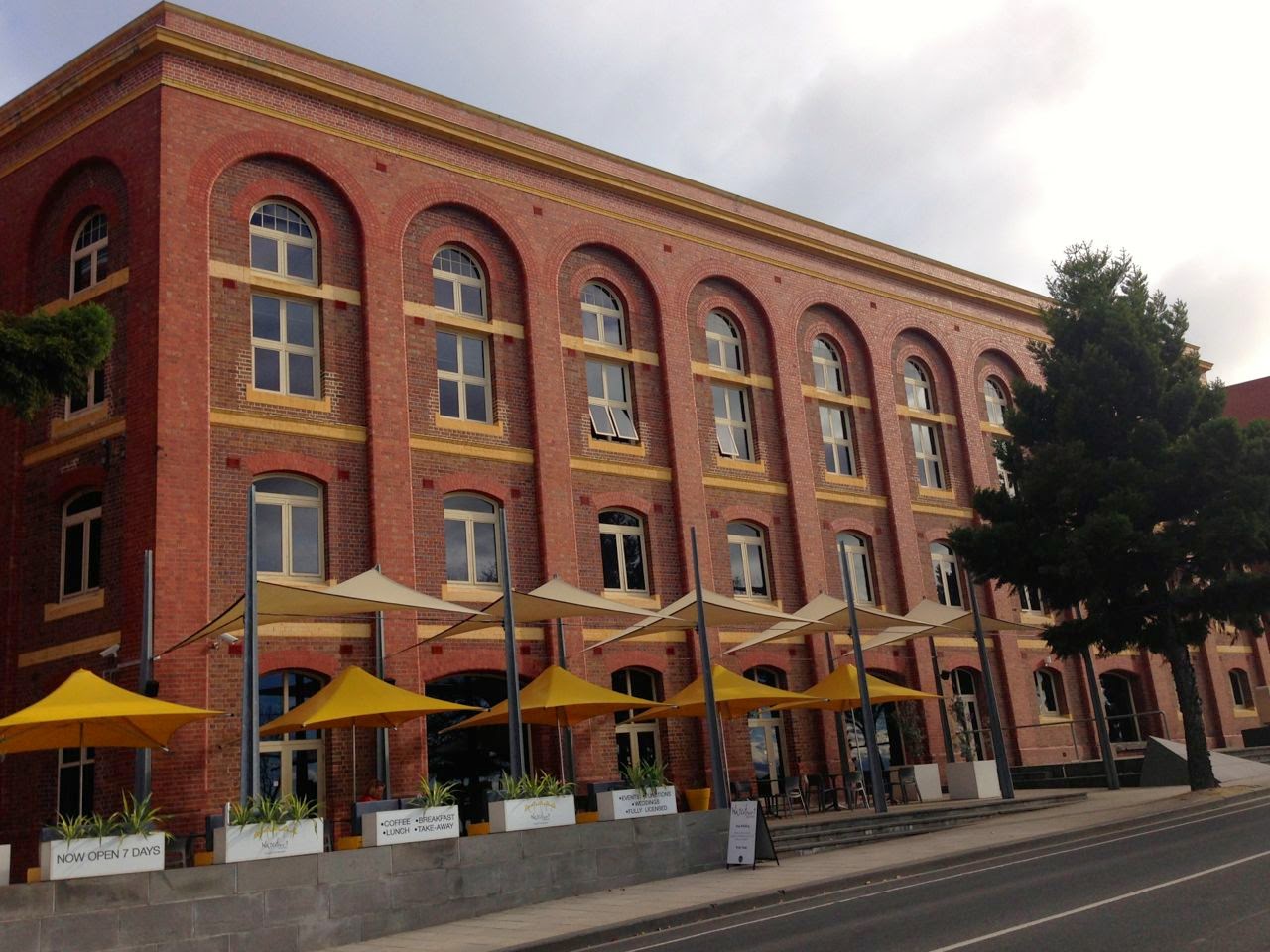 With some birthdays and school holidays, we have spent a bit of time recently eating out in Geelong.  In most cases I have been pleasantly surprised at the vegetarian options.  Over the past decade, Geelong has developed some cosmopolitan eating spaces, especially in Pakington Street and the waterfront.  Today I will share with you a couple of snacks at small cafes in the suburb of Belmont and an impressive lunch at Deakin University's Waterfront Kitchen. 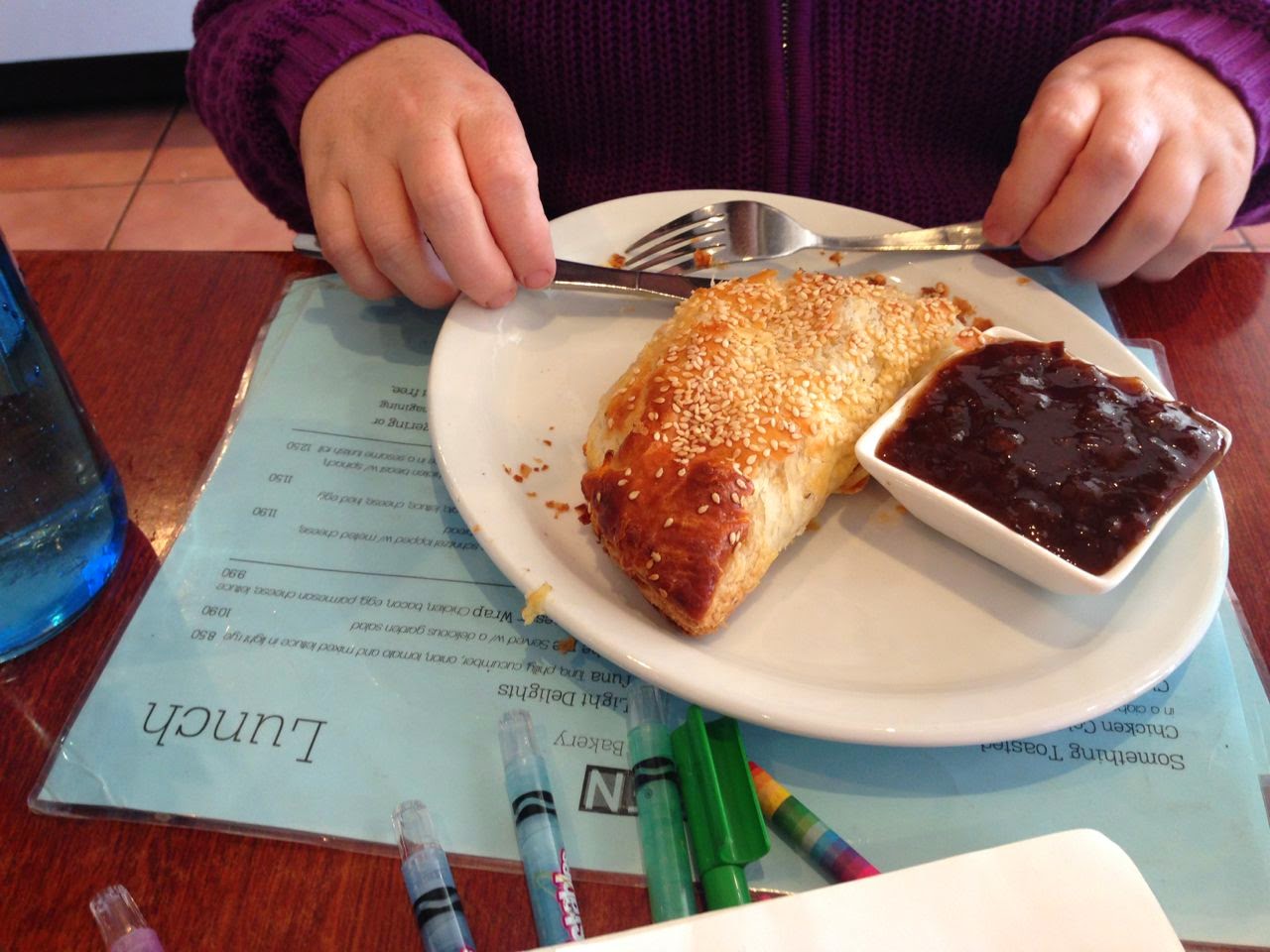 Let's start with our lunch at Zen Bakery in Belmont.  This is a nice space with a fairly basic menu of sandwiches, foccaccias and pies and pasties.   I enjoyed a vegetable pastie but barely made a dint on the huge dish of chutney.  Sylvia's order went awry and she was given a vegemite and cheese sandwich rather than a toasted cheese sandwich.  She loved the white bread and wanted some of the cute flower shaped biscuits.  Zen also sells loaves of sourdough bread but I wasn't sure what bread was at my parents' house. 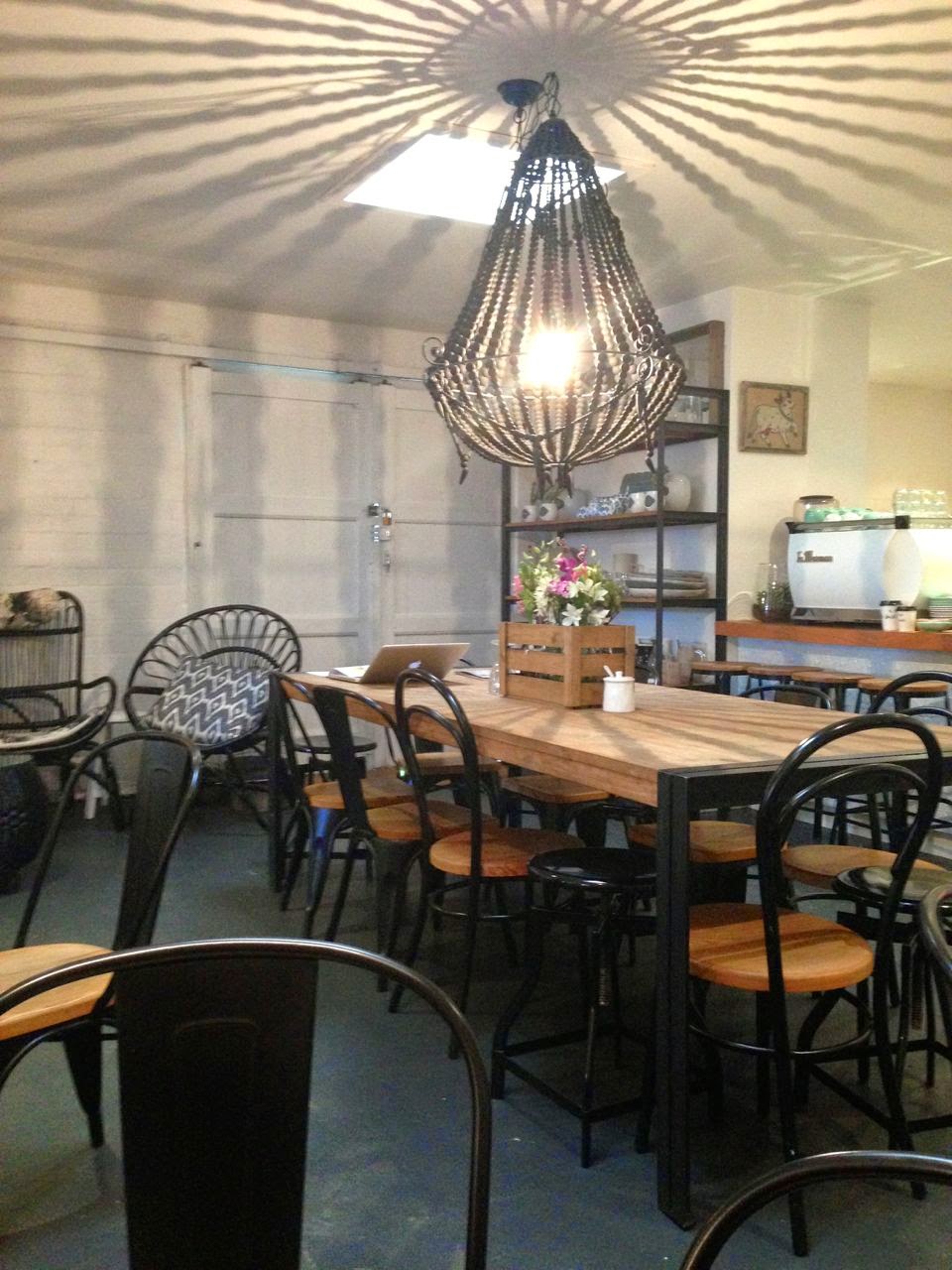 My family has raved to me about 2 little birds so I was pleased when my sister Fran suggested afternoon tea there.  It is far bigger than the small door off Roslyn Road would suggest.  Inside the door is a shop area selling clothes, homewares and jewellery.  Through the back is a gorgeous cafe.  A large table sits under a huge chandelier in the middle of the room, while around the sides are tables and benches with cushions and quirky touches like a ceramic cow's head on the wall. 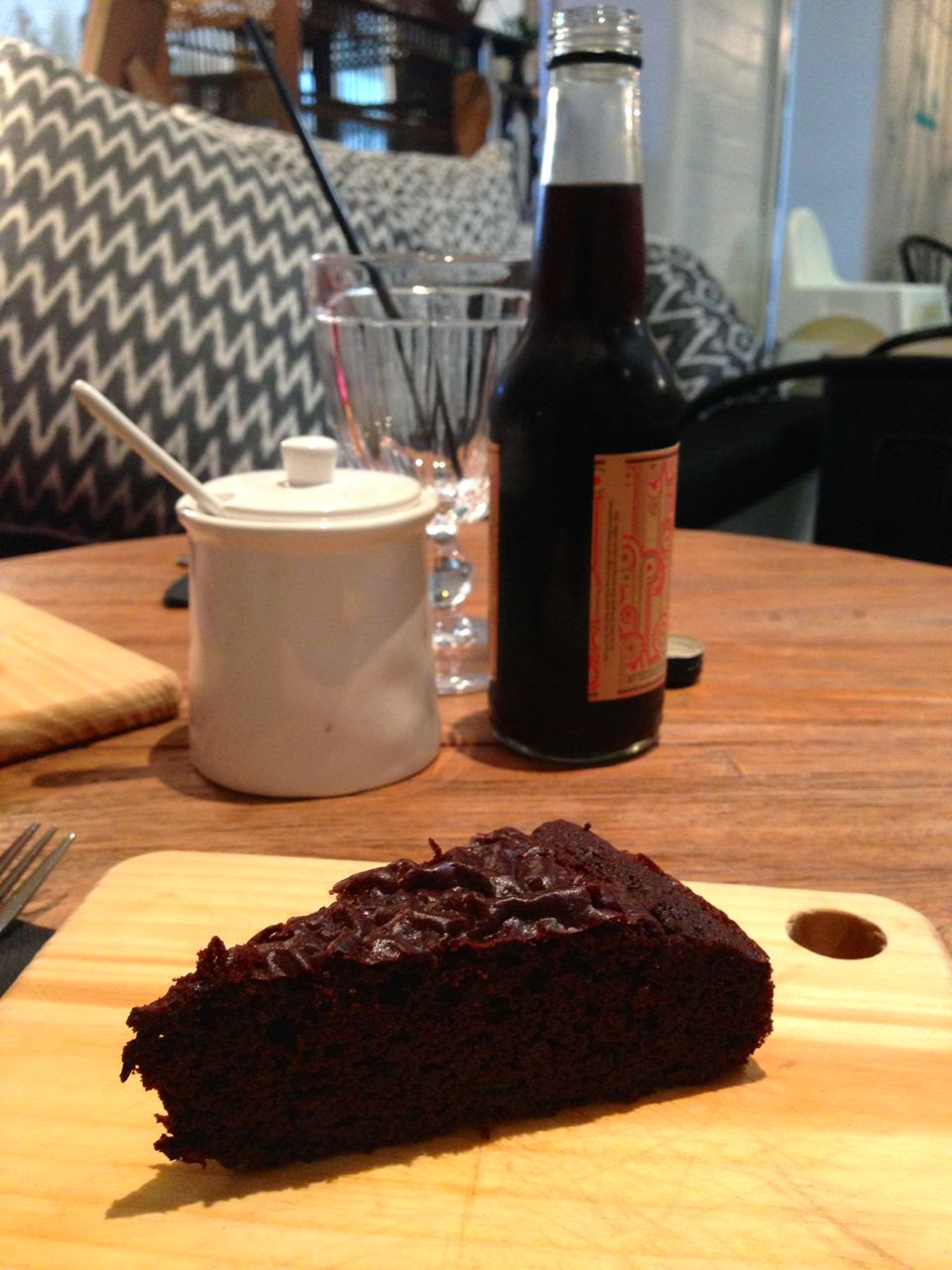 The cakes were really interesting.  Sylvia immediately decided upon the raw strawberry cheesecake ($8.50) and I had trouble deciding between the raw hazelnut chocolate cheesecake and the gluten free dairy free chocolate cake ($6.50).  I went for the latter and loved it.  (I was curious to know what nuts or flour was used!)  Sylvia wasn't keen on her cheesecake.  I liked hers but it was quite rich and not quite as smooth as I expected.  The sweet potato and lentil soup also sounded great.  It was good to catch up with Fran and Paul, and Sylvia had a lovely time with her cousins, Stella and Grace. 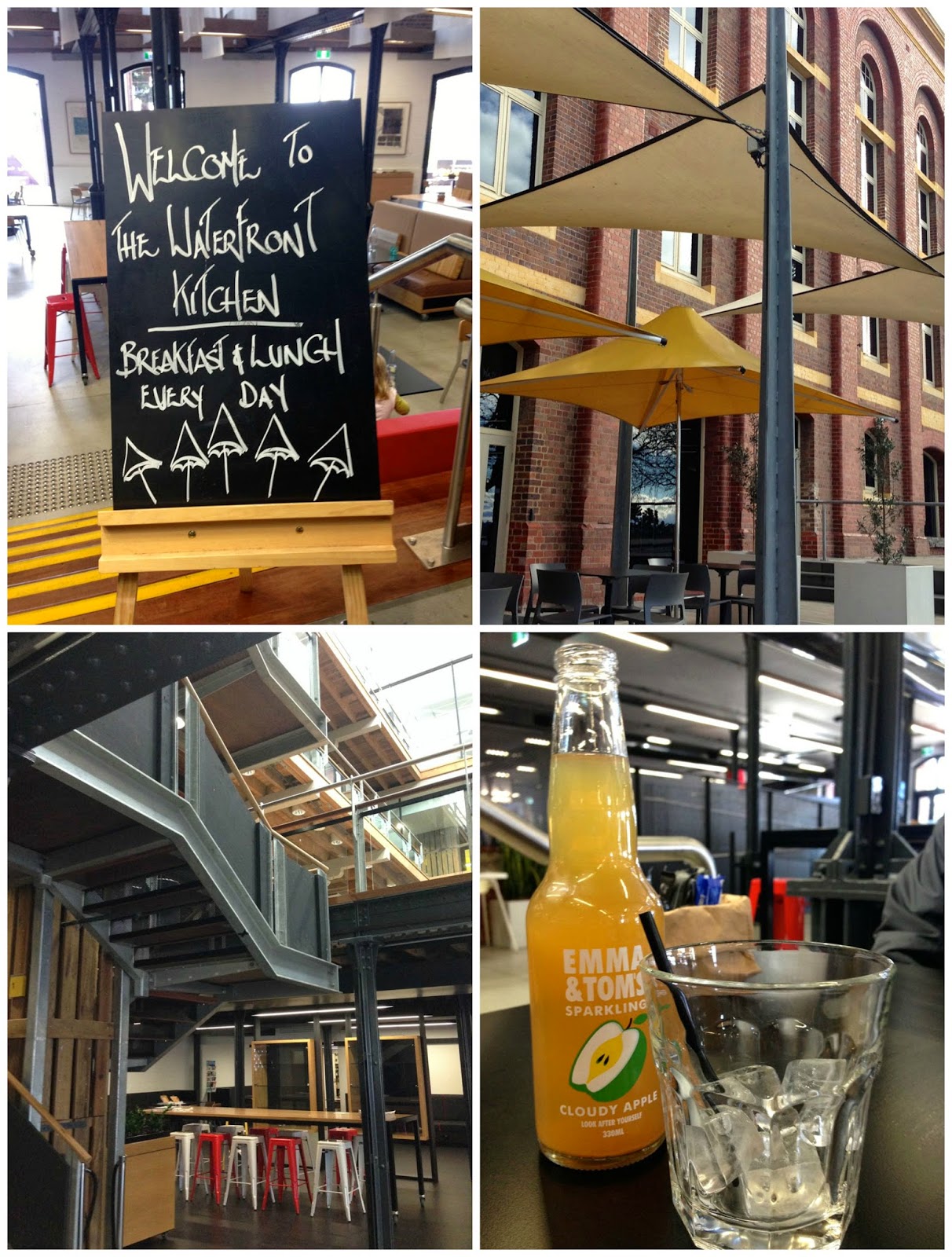 The next day after a fun swim with more of Sylvia's cousins, my dad took us to the Waterfront Kitchen at Deakin University's waterfront campus.  It is housed in the old Dalgety's warehouse (top photo) between the city shopping precinct and Corio Bay.  I remember going to a National Celtic Festival there in 2000, presumably before Deakin took it over.

The cafe is spacious with high ceilings hung with white cloths.  I assume these are to dampen the sound, given that it was not that noisy considering how crowded it was when we arrived.  (The below photo was taken at the end of the meal.) 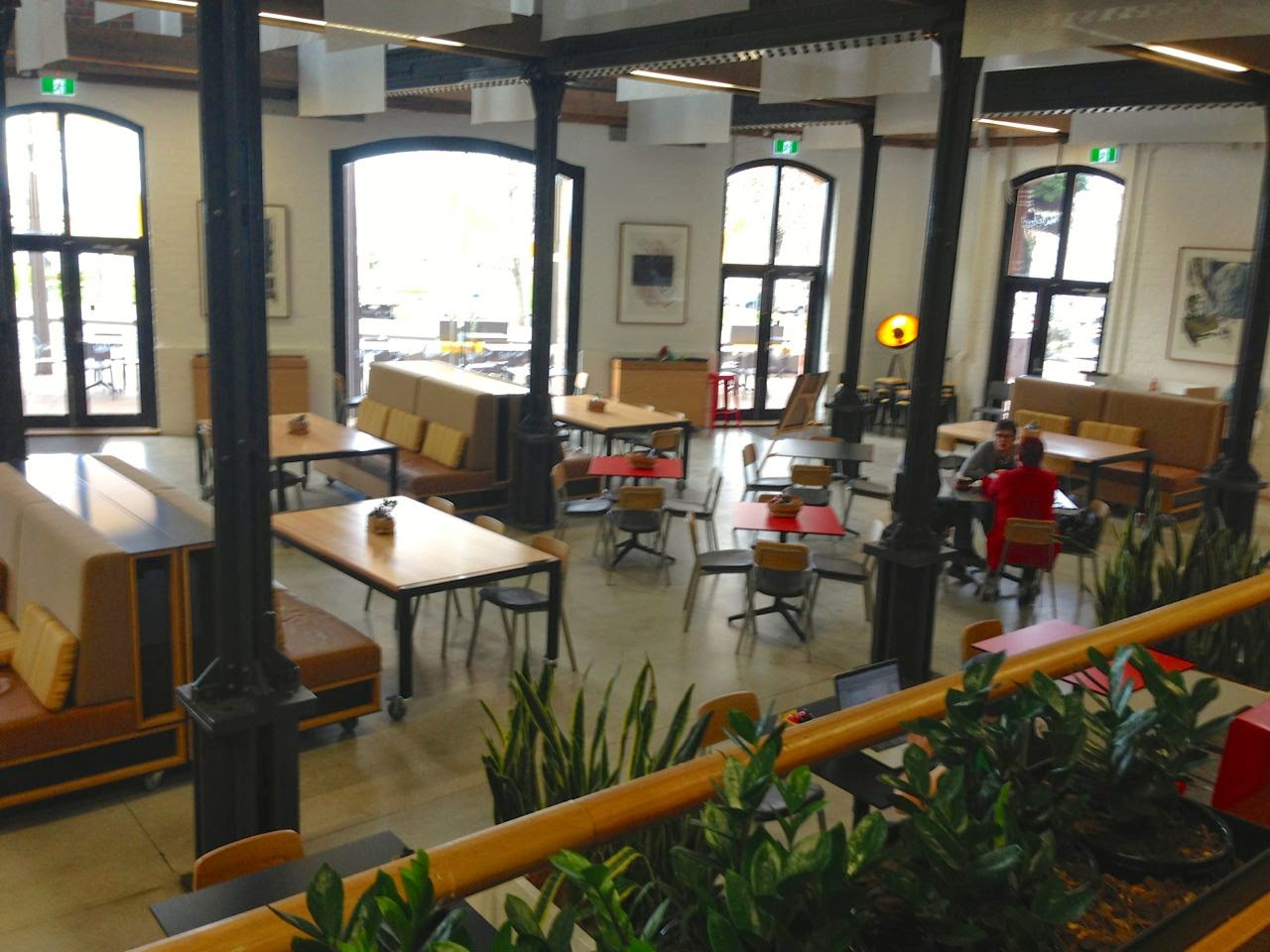 There is a cafeteria service and a waiter service area.  Sylvia had chips, as usual.  My dad chose soup from the cafeteria but I was tempted by the pumpkin fajitas ($18.90) on the menu.  My dad's soup arrived last and he thought it might have been forgotten as it wasn't piping hot.  However it was nice that there was no problem about serving us from both areas.  And he enjoyed his soup.

My fajitas had chipotle roasted pumpkin and mexican rice on two corn tortillas, topped with corn chips, cheese, peppers, onions and sour cream, with some guacamole on the side.  The pumpkins weren't large chunks with some chipotle powder on them but not as tasty as I had hoped.  The meal as a whole, though, was very filling, interesting and satisfying. 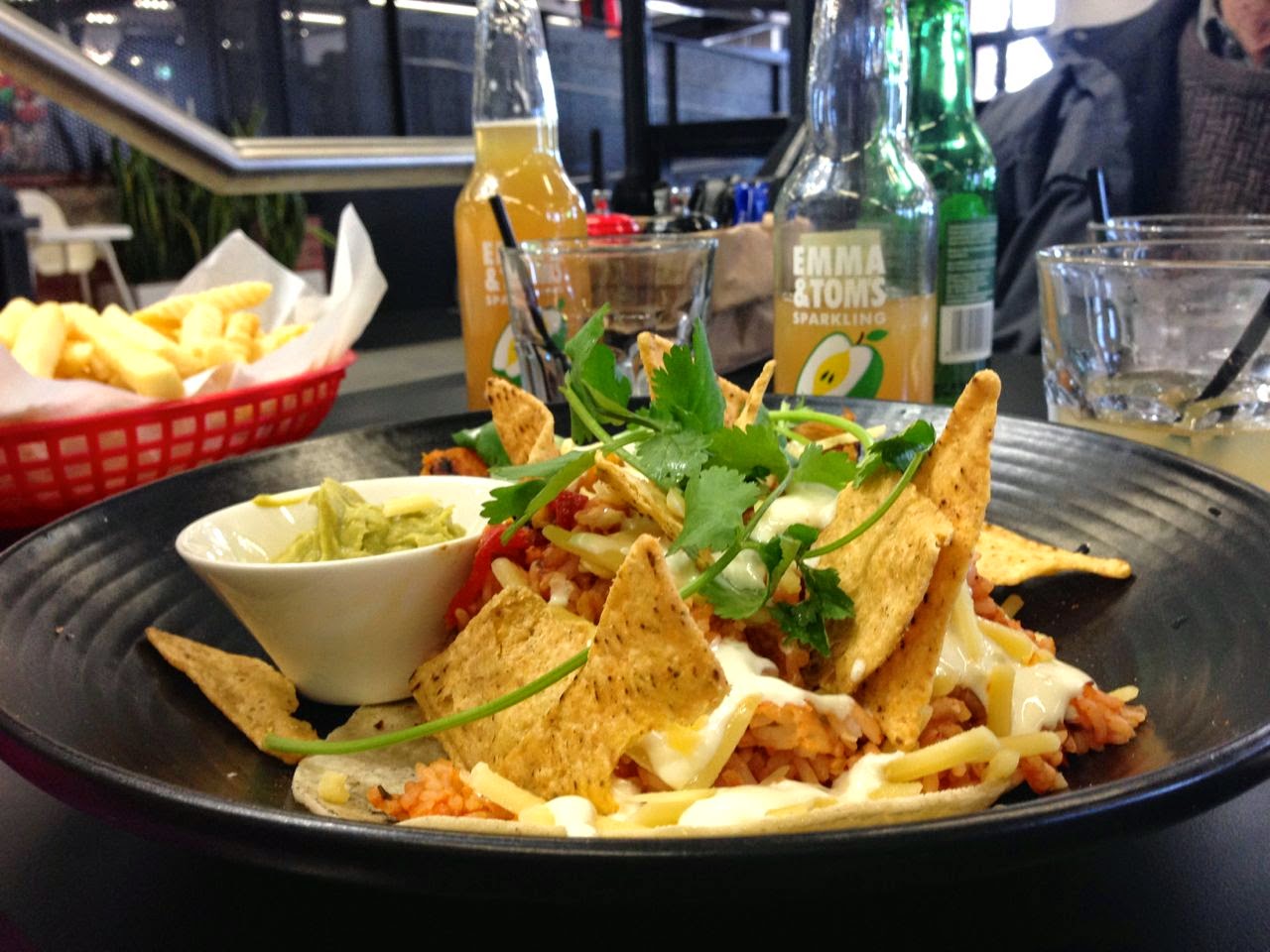 I am always fascinated by university buildings and I think it is great that the cafe opens this old warehouse to the public.  There are also some spaces to just sit and read or relax.  Geelong, like Melbourne, has moved towards a greater appreciation of its waterfront recently.  If the weather was fine, I think I would enjoy sitting outside the cafe and looking across the road to the Bay. 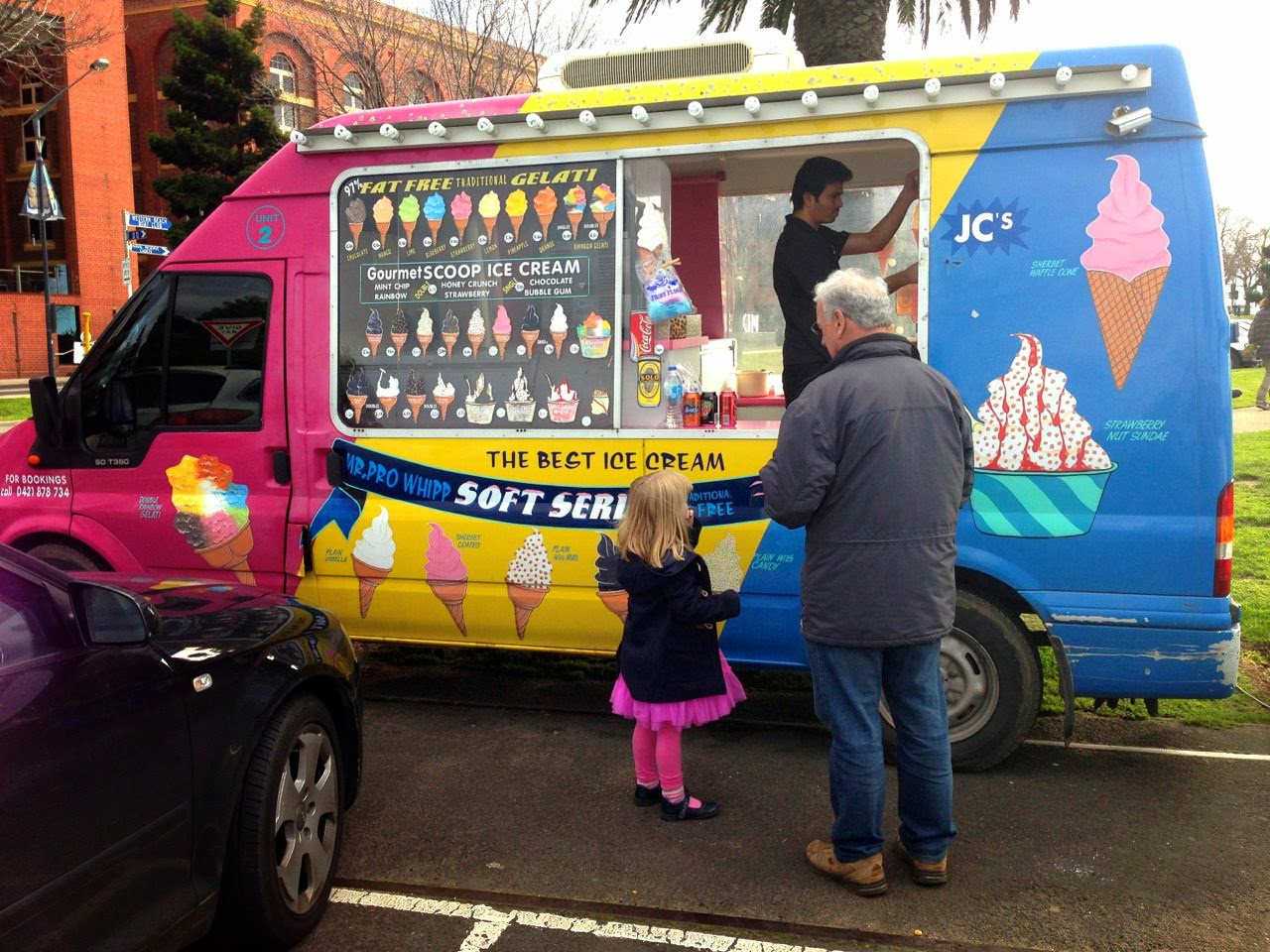 I was quite full after my meal.  Sylvia and my dad were up for an ice cream despite the cold weather.  We walked across the road to the ice cream van and bought chocolate covered soft serve ice creams. Even in the chilly afternoon the soft serve melted quicker than Sylvia cold eat it. 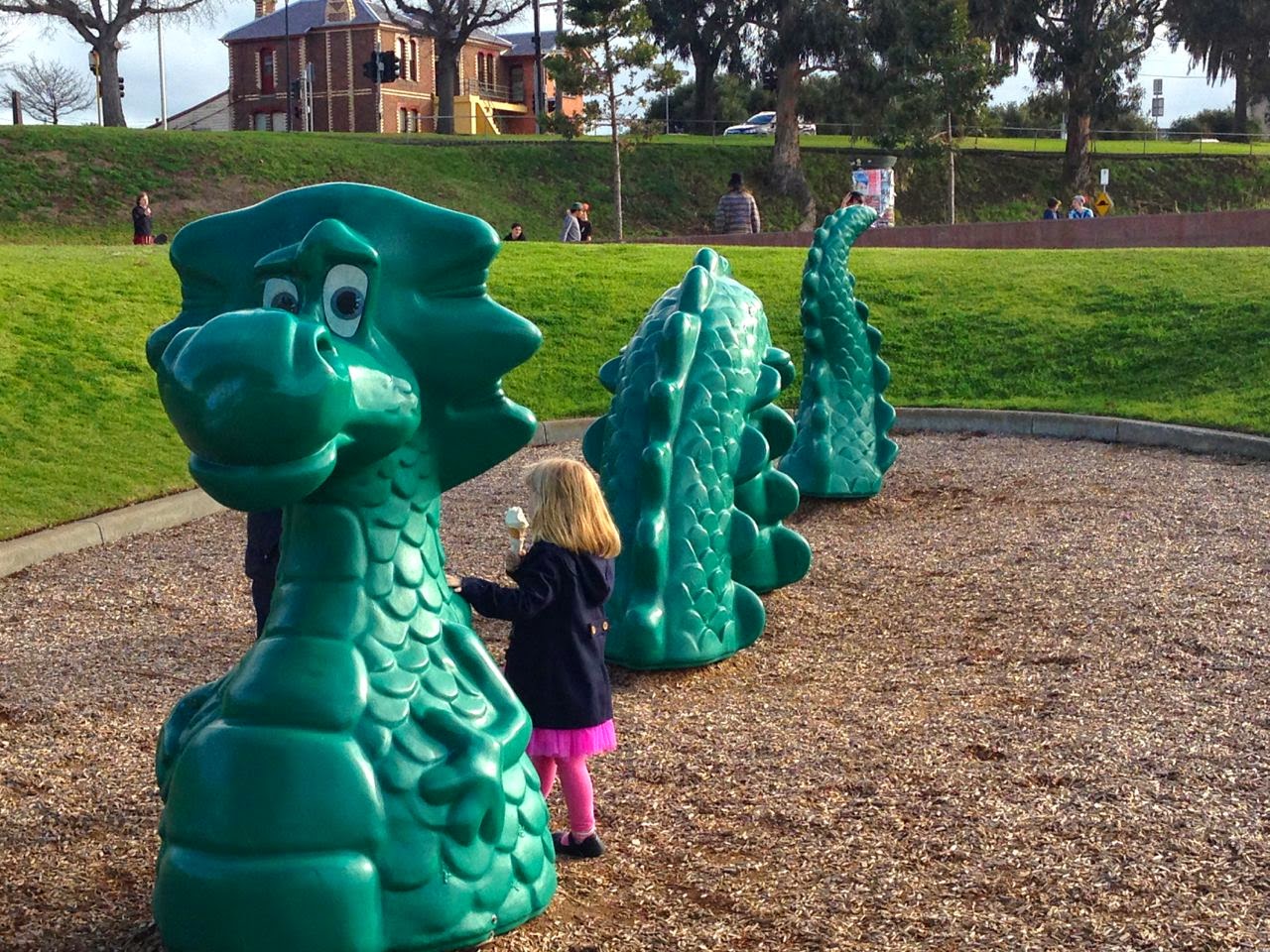 There is a great playground opposite the Waterfront Kitchen.  Young boys were scrambling up to the top of a pyramid rope climbing frame.  Sylvia preferred the water dragon and the swings. 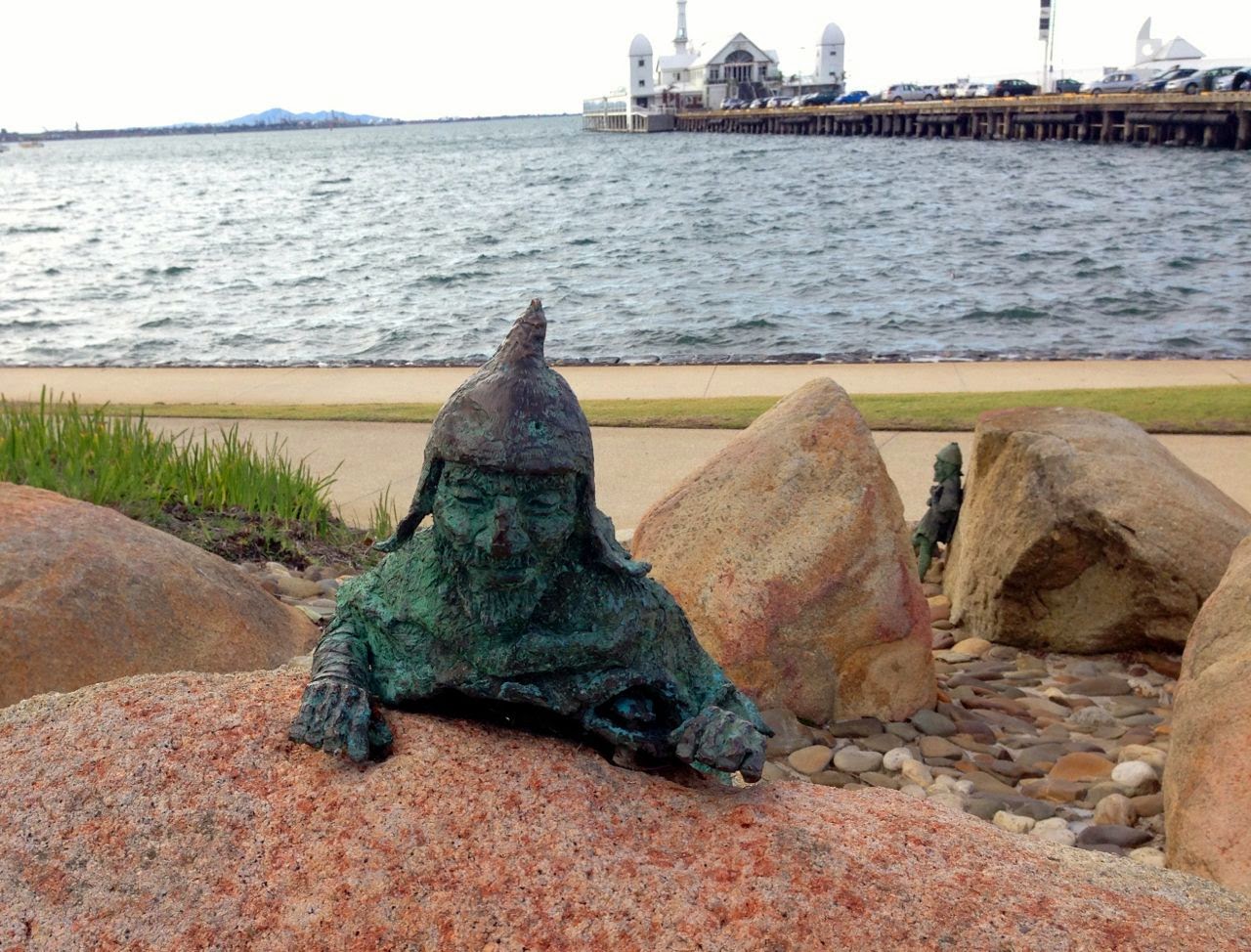 I really like the little memorial to the Poppykettle.  It was a book that everyone seemed to know in Geelong when I was young though I can't remember if I ever read it.  I think I liked the name and the little people.  As an adult I find it quite fascinating that they are Peruvians. 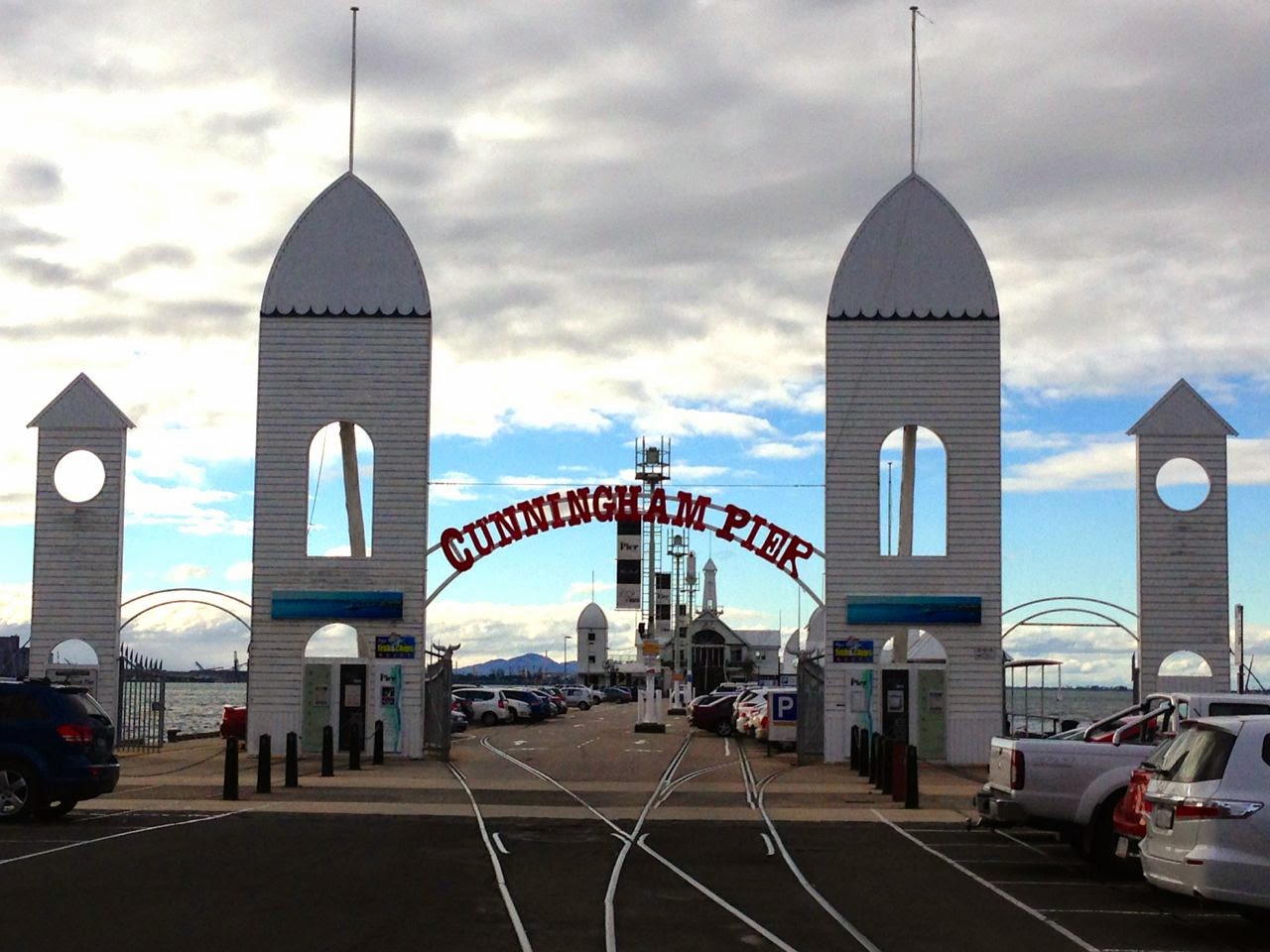 We parked at the edge of Cunningham Pier.  This pier dates back to the 1850s but in recent times has been the home to New Year's Even celebrations, Smorgy's restaurants and planning proposals.  I know the name there but don't think I have ever ventured down the pier. 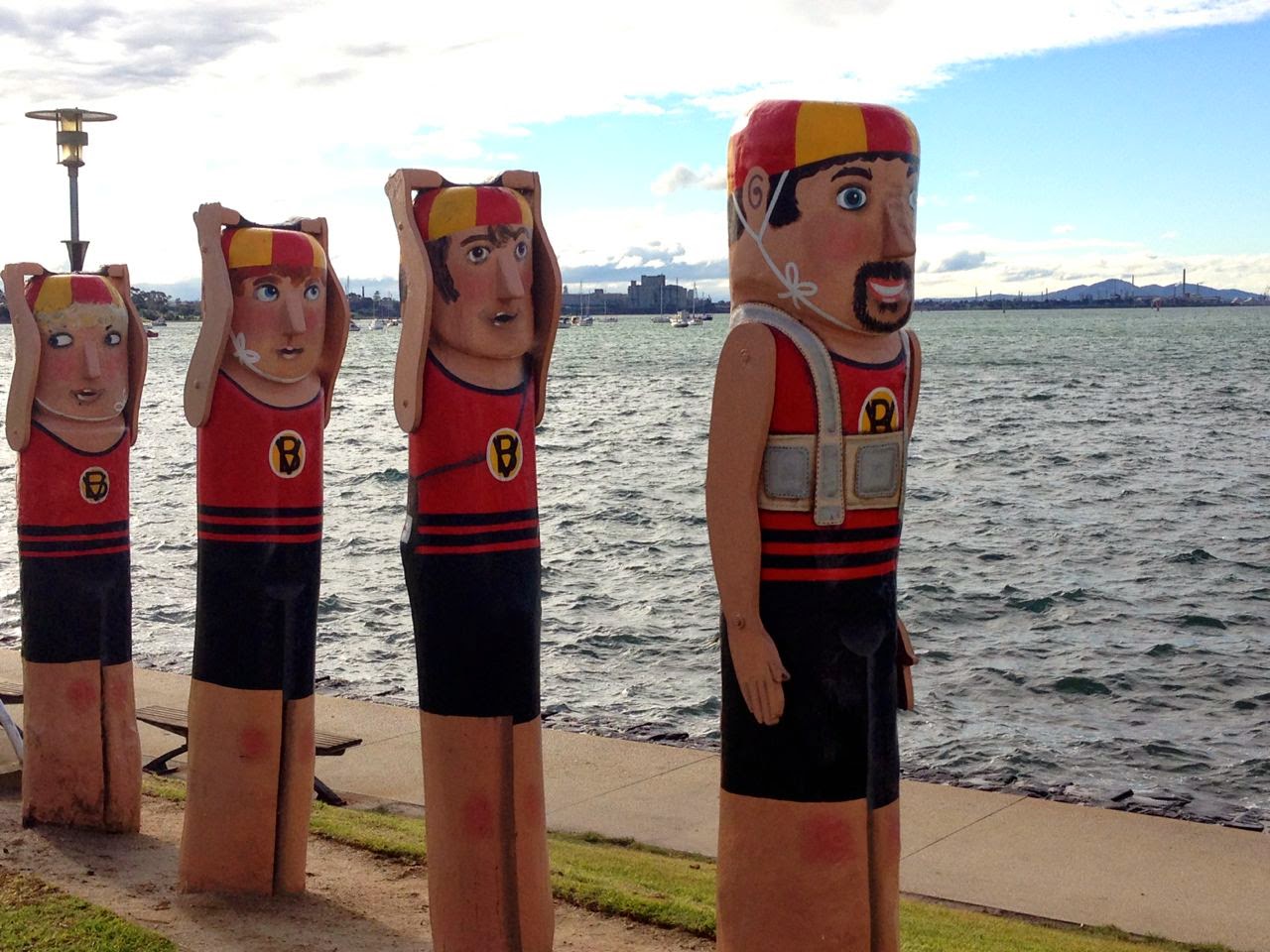 Finally we also wandered past some of the iconic bollards that give the waterfront colour and history.  They are always a delight to stumble across.  In fact the Geelong of today delights me far more than the Geelong that I knew as a child.  Even despite all the job losses with the closure of Ford and Alcoa, there is still a lot of vitality about the place.