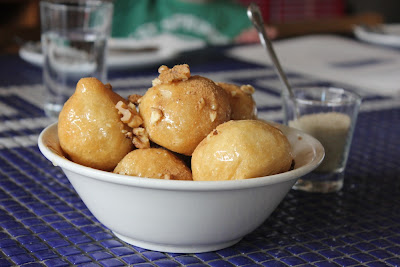 Every now and again I like to post some photos taken while out and about that never made it to the blog.  It is not necessarily because the food was bad.  Some places I had already written a lot about, others I didn't feel I had experienced enough to write about them and others just got looked over in my blog backlog.  These photos were taken over the past year.  My memory is not as clear as I would like with some but having a photo of a menu in this situations is a godsend. 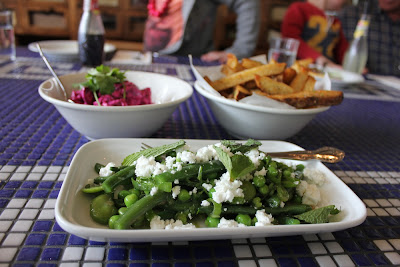 A favourite local restaurant for a special occasion.  We had a great family meal there in October last year.  Above is a selection of dishes we shared at the communal table.  Greens and feta, beetroot salad and chips.  We also had bread and dips, saganaki with peppered figs, At the top are the amazing honeyed doughnuts that we had for dessert. 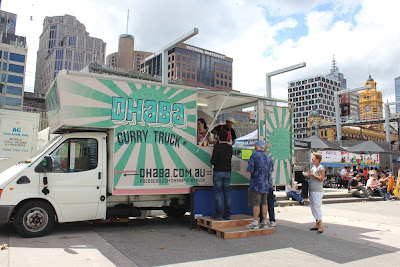 Dhaba Curry Truck
on the move

I have read others talk about food trucks but, despite passing them in the car at times, I never see them when I want them.  So I was interested when the Melbourne Food Festival last year had a Food Truck gathering by the Yarra River.  I went along hoping that I might try the Taco Truck fare but the queues were huge. 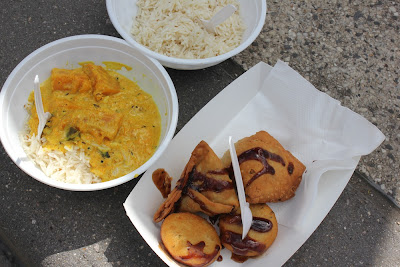 Instead we went to the Dhaba Curry Truck which was fairly quiet (unfairly).  E and I decided to share two starters and a curry.  A pumpkin curry with mustard seeds, turmeric and coconut milk.  With rice.  Accompanied by potato, pea, pomegranate and green mango samosa and potato and paneer patties (aloo tikki).  It was not quite as fancy as the ingredients might suggest, and it could have had a bit more protein, but it was very good street food. 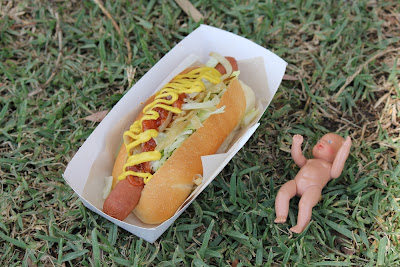 While visiting Federation Square last year we stopped for lunch at this hot dog stand.  They were serving vegetarian hot dogs in any of their 10 styles of hot dogs.  Except that there was no sauerkraut for the one I wanted.  Instead of the Bavarian, I went with the Grandstand Hot Dog.  It was accompanied by lettuce, fried onions, tomato relish and mild American mustard.  It was cheap and cheerful but I liked the different combinations.  I had hoped to come back but it seems (from a quick web search) that they have closed.  You can still read more about them on Where's the Beef. 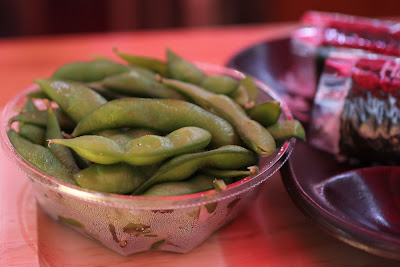 I wrote about Kenzan at the GPO some years ago after discovering their roll-your-own sushi.  More recently Sylvia and I discovered their edamame pods.  The name has now changed.  The place however remains as busy as it was when I first wrote about it but it remains a favourite place for a quick city lunch.  I love that I can get Sylvia some protein with her sushi, even if we have to fight the sparrows for it.  I am still planning to try some soups or stirfries there one day because they look great. 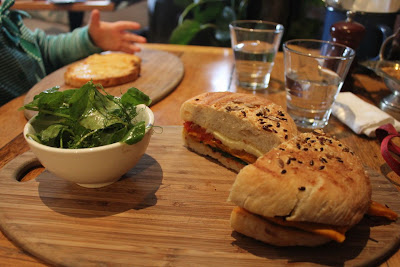 My sister Fran and I planned to go to Miss Marmalade recently and then postponed our coffee.  Soon after Sylvia and I were in the area so we dropped in for lunch.  (Fran has a nose for a good cafe!)  I was a little disappointed that the menu had changed from what was on the web and there seemed to be less vegetarian options.  I was too distracted doing puzzles with Sylvia to take much notice of the menu.  All I remember pumpkin, green leaves and soft cheese.  Sadly I can't recall the interesting description on the menu, hence no dedicated post right now.  I had wanted more than a sandwich but this was an amazingly good sandwich.  Sylvia had cheese soldiers.  I had a chocolate lamington to take away which was delicious too.  The space is very stylised but in a funky, down to earth way and the staff were among the friendliest I have encountered. 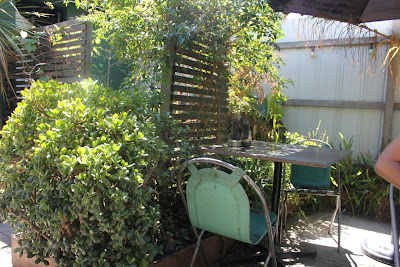 I mentioned this cafe where we had lunch during the ukelele festival in March.  Though I posted a photos of E's haloumi on corn bread with pea salsa and fried egg and my fruit toast, I thought it useful to include it here and it gives me a chance to share the courtyard photo.  I would like to try the cornbread with pea salsa but the price does not make me want to rush back.  I did enjoy chatting to the woman behind the counter about the eggcups on display including her one from her childhood.  The decor is quirky but it was rather noisy in the main cafe.  There was a room out the back as well as a courtyard, which were quieter. 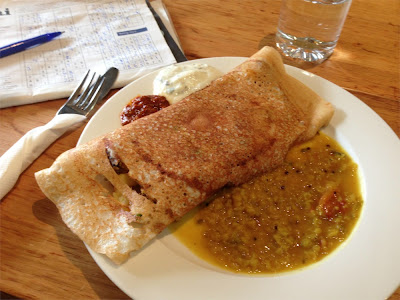 Last week Sylvia and I went to the mall for lunch.  I bought her a cheese pita and took us to Sarabella.  It is a place I went to years ago and constantly intend to return just for the masala dosa.  We found a seat inside among brightly coloured cushions and, as in my last visit, found it bright and friendly.  The food caters to a number of dietary preferences and is reasonably priced.  The chutney was a bit spicy for me but I loved how my dosa cam with dal and yoghurt as well.  I must return sooner this time so I can try some other dishes.  For more information and beautiful photos, check out reviews at the Quince Poacher and Consider the Sauce. 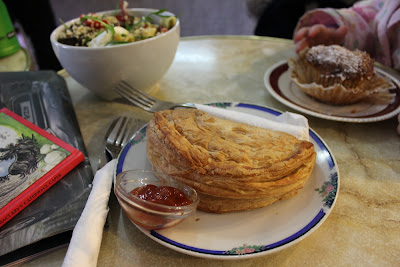 I also included Sugardough in my 2011 eating out catch up post.  One day I will do it justice in a post.  We went there in the middle of winter for lunch last year.  I was amazed and pleased to get a seat in the little cafe.  I had a pumpkin pastie and salad.  It was nice but as I finished it I saw the soup on the specials menu and wished I had chosen that instead.  I want to spend my time in their courtyard.  I want to eat more of their bread and bombolini and savoury muffins and cakes.  In fact, you can never have too much Sugardough in your life.  Can you tell I love the place? 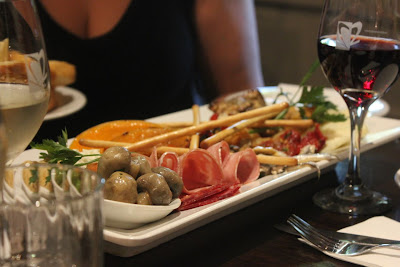 I had my farewell dinner with my workplace colleagues at Tiamo 2.   It wasn't my choice.  While to some it is a venerated Carlton institution, I have found it dark and full of meaty dishes on previous visits.  I was far more impressed with it this time.  We shared the antipasto platter (pictured) and though I had to avoid the meat, the vegetables and dips were lovely.  I also enjoyed my zucca (pumpkin) pizza.  Maybe it is time to give it another go. 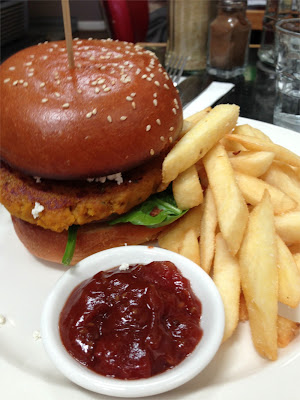 I went here with my mum and Sylvia a short while back.  The other time I was at this cafe, it had a different name and I took photos and accidentally deleted them.  So I am posting this photo even though it is an ordinary one taken on my phone.  In fact, I thought the menu had improved, though there was still some good kid's books and toys by the windows.  I had the pumpkin and walnut burger with pesto and feta on a brioche bun.  It was excellent and came with heaps of chips.  My mum had the meaty cousin, the Coburger.  I loved how the foccacias were all named after Coburg Streets.  The fillings looked quite tasty.  I must return to sample more of the menu.

We went to Wide Open Road with my sister Fran and her partner and wee baby just before Christmas.  The food seemed even better than our first visit.  E had the scrambled tofu that I have already written about.  Fran had pancakes with rhubarb.  I had sourdough toast with smashed peas, wild rice and candied walnuts.  A-Maz-Ing!  I am not sure that this dish is still available but it was good enough that I would love to try and recreate it at home.

Lastly: the cafe that will not be named
Recently I went into a cafe that had a sign on the door saying No Bloggers.  If I took this literally they would not have had my custom.  I wonder what they really meant.  No photos?  No writing about us?  No UrbanSpoon.?  No Facebook?  No tweets?  No taking notes of any sort?  Don't even write in your diary!  Well I didn't take any photos nor will I promote them, despite enjoying a savoury muffin.
Posted by Johanna GGG at 22:46