Chocolate lime energy slice, the park and the beach 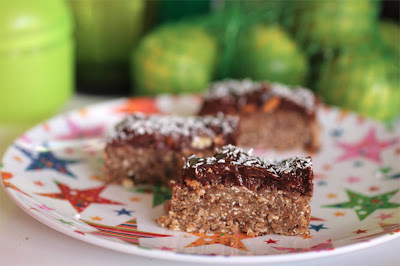 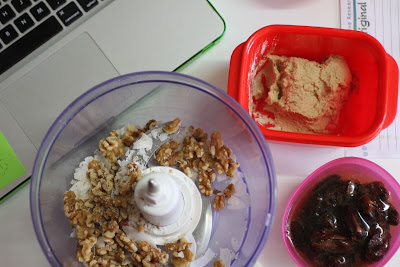 This slice was meant to be.  I saw a few tempting recipes during the week.  I still had some of the lime cheesecake filling I had made for Easter eggs.  (We had made two batches of easter eggs but that was enough!)  So I decided to use this instead of nut butter.  It was brilliant in these bars. 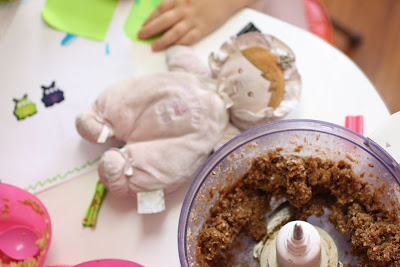 I decided to use what I had at hand to make the slice.  Hence some more changes to ingredients.  I was shocked to find that we only had a measly 1/2 cup of walnuts left.  (Hmmm maybe I should have used up some of the oodles of almond meal I have in the fridge.)  The mixture was a bit wet so I added the dregs of a packet of coconut flakes and then more dessicated coconut.  I didn't have any plain chocolate so I used some of a bar of roasted almond chocolate. 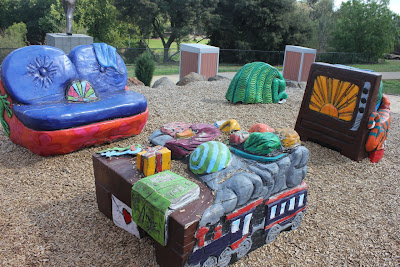 Once the slice was firming up in the freezer, we packed out picnic lunch. Some cheese and vegemite sandwiches, fruit and a few small Easter eggs.  (We don't seem to be going through the Easter eggs very quickly this year and still have some left.)  Then we headed off to a new park I had found online. 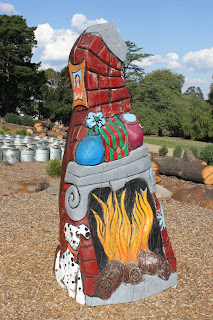 The park is in De Chene Parade on the other side of Coburg Lake from the side where we usually go.  I was intrigued by the 'loungeroom'.  It is a carved loungeroom of sofas, a cluttered coffee table, a toy box, a fireplace and a tv with an aquarium.  Just this list gives you an inkling of how much attention to detail there is.  It was brilliant but it was too hot to sit there when we arrived. 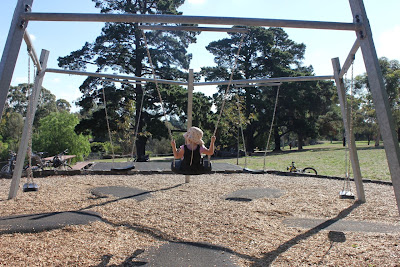 The park was full of interesting play equipment.  It had a hexagonal sing.  Five swings all face one another.  It is quite friendly and there is usually a swing free for a little girl.  The flying fox was the longest I have seen at a kids park.  It gave Sylvia a fright on her first go but she loved it enough to go back again and again.  There was also a maze of old tins, a large seasaw,  more public art and an outdoor Twister dial and mat.  It was well attended without being horrendously busy. 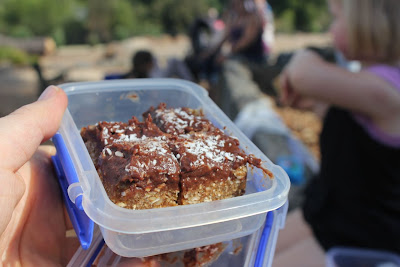 The slice was just the thing for the picnic.  Sylvia didn't care for her sandwiches and merely picked at them.  She managed to enjoy some slice, plums and an Easter egg or two.  As for me, I loved the slice.  It was dense and chewy on the bottom but soft and chocolatey on the top.  The roasted almonds in the chocolate were nice in the topping but the banana and lime together made it a tad fruity, even for me.  Nothing that I couldn't get used to, of course! 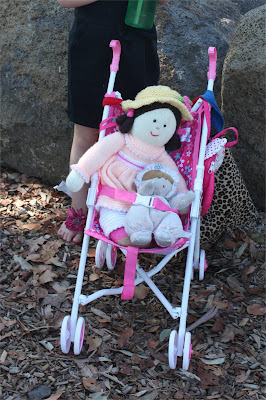 We had gone to the park from De Chene Parade so I was curious to see how to get to the part of Coburg Lake the we know.  We got quite a few smiles at Dolly with her big sister Jemima in their stroller as we carried it down the steps and across the bridge to the larger more traditional playground by Murray Road. 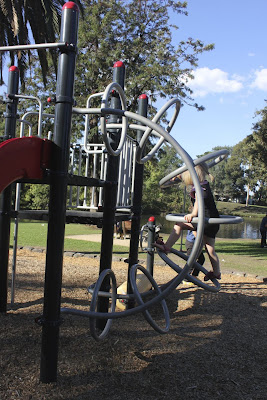 Sylvia took a fancy to this above curved ladder up to the slide.  It brought out the helicopter parent in me when she reached the top.  But she told me that now she is 4 she can climb it.  Mostly I stood around trying to make sure people didn't trip over Dolly and Jemina in their stroller.  Eventually I had to insist that we head back across the bridge and up the steps to our car for we had to get home for dinner.  It was such a lovely balmy evening that it was hard to leave.

The next day was another sunny day.  We drove down to see my parents in Geelong and from there to Torquay Beach.  It was our perfect day for the beach.  Warm enough to go in the water, mild enough that we didn't worry about sunburn and the waves were mere ripples so Sylvia was quite happy to splash about in the sea.  I was happy that there were no crowds but we loved the sandcastles, seaweed and ice cream!  It left me wishing for more.  Just like the slice!

I am sending this slice to Ricki for her wonderful weekly Wellness Weekends event.

Previously on Green Gourmet Giraffe:
One year ago: WHB Purple carrot soda bread, wildlife and sandcastles
Two years ago:  Memes are due. Thanks are due.
Three years ago: SOS KC: Beets, Greens and Chickpea Curry
Four years ago: A Nutroast Tribute
Five years ago: A Long-winded Nut Roast Post

Soak dates in boiling water for about 5 minutes.  Drain and set aside.  Place all ingredients (including drained dates)  into a food processor and blitz until you have a sticky mixture that is almost a ball but not quite.  (You don't want it too wet or it wont firm up enough.)  I had to scrape down the sides of my food processor quite a few times.  Line a 15cm square cake tin with baking paper.  Spread mixture into tin, pressing down with the back of a spoon.

Make topping: Puree banana in food processor.  Melt chocolate in a heatproof mixing bowl in the microwave and stirring in banana, honey and lime juice.

Pour topping over slice.  Sprinkle with coconut.  Place in freezer for an hour or two to set.  Cut into squares or bars.  Can keep in the fridge or the freezer.  I found my slice was quite firm when out of fridge but topping kept firm only if in freezer so I kept mine in the freezer.

NOTE: If you don't happen to have cheesecake mixture like I did then nut butter should be fine but you may need to check the consistency of the slice mixture as it may change a little.  If you want the lime flavour I recommend more lime zest in the slice and less lime juice in the topping.

On the Stereo:
Deserters Songs: Mercury Rev
Posted by Johanna GGG at 22:47