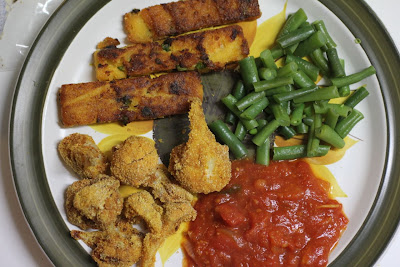 Planning dinner often fills me with delusions of a calm evening around the kitchen table eating a meal of perfectly balanced nutrition.  My plans usually include wonderful side dishes that never see the light of day.  Sometimes I have leftovers and a chance to make amends.  So it was with these recent polenta, cauliflower and pea fingers. 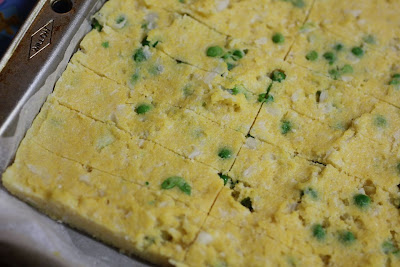 I found the Cauliflower, pea and parmesan polenta 'chips' in one of my old food magazines.  It looks simple and impressive.  Making polenta in the microwave is indeed simple but making it in time to pick up Sylvia from child care was a little more rushed than I planned. 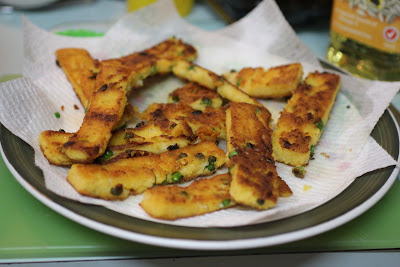 When you look at my attempt, you will see why I renamed mine fingers rather than chips.  E actually commented that they reminded him of the vegetables fingers (the vegetarian version of fish fingers) that you can buy in the freezer section of the supermarket.  I can see it.

I decided to follow the recipe and fry these on the stovetop.  They were mighty crispy but fragile.  Polenta becomes so soft once hot that it is hard to handle.  They collapsed at the merest sniff of the tongs and even an eggflip (spatula) challenged them. 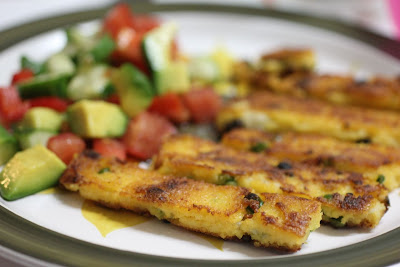 I think I would have liked to try spraying them with oil and baking them.  Not only to be more healthy but because the night might have been less hectic.  Though I don't think I can blame them for the spilled milk,  the tofu bacon that was eaten before I had a chance to cook it or the avocado that wasn't as ripe as it felt.

Dinner time was so chaotic that we ate quite a few of the 'fingers' once they had cooled enough to eat them.  Finally I managed to throw together a simple salad and pile more fingers on the plate.  Not the most satisfying of meals.  At least there were a few fresh vegies on the side. Sylvia had a few fingers but had to pick out the peas.  Sigh! 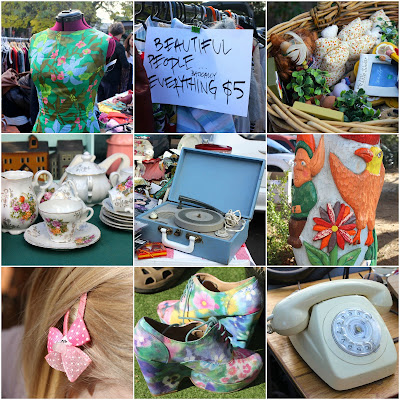 The next day we went to Fitzroy Market.  It is always interesting to look around and see what is on offer.  I bought the old telephone in the picture above for a mere $5.  It is very similar to the one we had in my childhood home.  It is just a plaything for Sylvia.  Sharing a bit of my childhood with her.  If I had the energy I would like to see if it works.  Hear it ring. 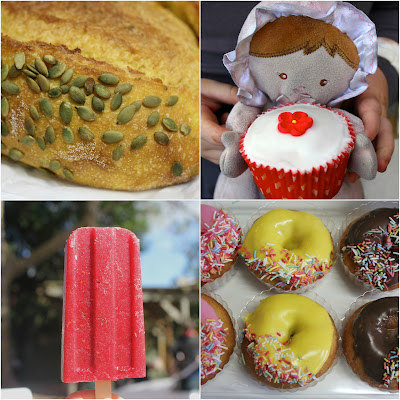 The market focuses on clothes and brickabrack.  There are always a few stalls selling food.  The sausage and jam stalls have been a constant since we started going last year.  More recently there is a sourdough bread stall and the lovely icy pole lady.  We always have a vegetarian sausage off the BBQ.  I had a rhubarb and raspberry icy pole that I gobbled up quickly.  Sylvia dilly-dallied over her chocolate avocado one.  She hadn't made much of a dint when it somersaulted over her clothes and into the dirt.  I bought her a cupcake. 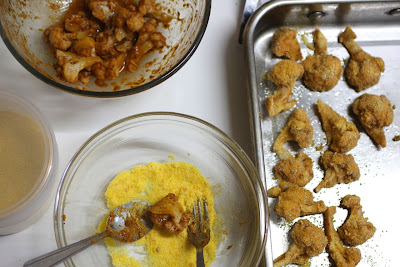 We stopped at the supermarket on the way home and bought doughnuts, among other things.  At home I knew what I wanted to make.  Cauliflower seems a food blogging favourite lately.  (It has come a long way since the 1960s if the disparaging remark about cauliflower fritters on George Gently tonight is anything to go by) As well as being inspired by cauliflower rice, I have also seen some interesting roasted cauliflower recipes. 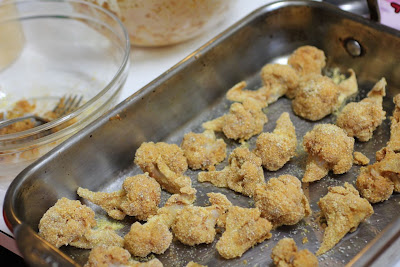 I couldn't go past the novelty of a recipe that had mashed banana included in the coating.  (It was there for binding more than taste.)  These polenta coated cauliflower were not too difficult.  The baked polenta on the florets was slightly grainy as polenta can be but a nice addition to dinner.  I still had some leftover polenta fingers.  This night I made some simple tomato sauce and steamed some green beans over the sauce.  Amazing what can be done with a little more time and energy. 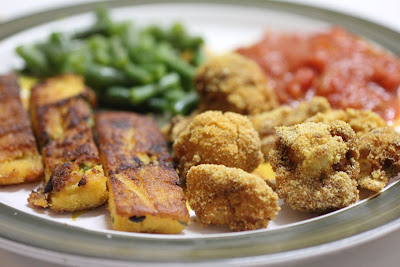 We sat at the table eating a interesting plate of food.  Different textures and colours. It was just as I had imagined when I made the polenta fingers.  Smiles.  The gentle clinking of the knife and fork on the plate.  Intelligent chit chat.  Well not quite.  Sylvia said she was unwell and didn't want to eat her dinner but there were no tantrums and she did eat a reasonable amount - with some gentle persuasion.  Then we played snap with her Playschool cards and she went to bed.  Why can't more nights be like that!

I am sending the polenta fingers to Jacqueline for Bookmarked Recipes and the cauliflower bites to Ricki for Wellness Weekends.

Place polenta, milk, water, salt and smoked paprika into a large heat proof bowl.  Cook in the microwave until a thick porridge, stirring every 2 minutes.  I think it took me about 8 minutes.  Mix in cauliflower mash, peas and cheese.  Tip into a greased and lined swiss roll tin and use the back of a spoon to spread until fairly flat and even.  Set aside an hour or two to cool.

Cut cooled polenta into fingers (I think I made about 18 fingers - ie 3 x 6).  Heat about 1/2 cm of canola oil in a large frypan.  Fry polenta in batches (I did 3) until crisp and golden brown on both sides.  Use an eggflip (spatula) to flip over - I tried using tongs and the polenta fingers collapsed but the tongs were useful to steady the fingers I was flipping over.  It took a while to fry all the fingers but worth doing it all even if some go into the fridge for the next day.

Crispy cauliflower bites
Adapted from Including Cake
serves 3 to 4

Trim cauliflower and chop into florets.  Cover florets with boiling water in a saucepan (and a pinch of salt wouldn't go astray).  Bring to the boil and then boil about 1 minute (this took me about 5 minutes).

Mix banana, water, nutritional yeast flakes, linseeds, smoked paprika, soy sauce and salt in a medium mixing bowl.  Toss cauliflower florets in smoky mixture.  Place polenta in another medium mixing bowl and use a spoon and fork to dip individual cauli florets into the polenta and then into an oiled large roasting dish.  Place florets in one layer with a little room to crisp up.

Spray polental florets with oil.  Bake at 180 C for 60 minutes until crisp.  (Warning: The 'Including Cake' recipe did them at a lower temperature for shorter time - her oven must be far more powerful than mine.)

On the Stereo:
Folk is not a four letter word - Various Artists
Posted by Johanna GGG at 23:37