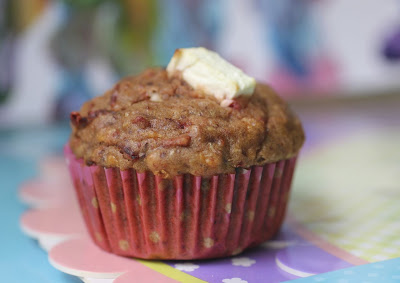 "Can we put sprinkles on them?" asked Sylvia.
"They are not that sort of muffin," I replied.

We had just finished making muffins.  Chocolate muffins.  Savoury chocolate muffins.  It was just that sort of dinner.  I served Sylvia some rice that was actually cauliflower.  It fooled my small girl.  Just so long as she could add soy sauce.  Not too much.  While we ate, the muffins cooked, smelling for all the world like a sweet chocolate dessert but filled with salt and cheese rather than sugar. 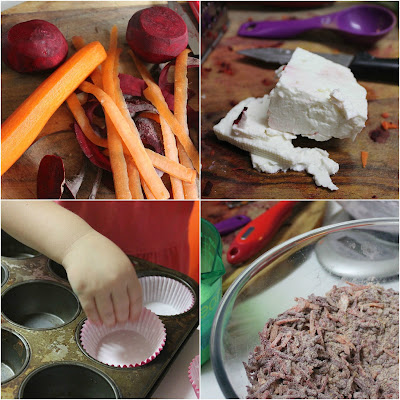 It was one of those lovely autumn days just before Easter.  The sun warmed the house in a pleasant way.  The back door was thrown open.  Sylvia played in the paddling pool outside.  I roasted vegetables for the cauliflower rice and found myself organised enough to bake the muffins I had admired on Choclette's blog.

I had all the ingredients.  Almost.  I found I didn't have yoghurt.  So I put a slurp of vinegar in some soy milk.  My goats cheese didn't seem as soft and creamy as Choclette's.  Hers sits in the muffins like cream cheese.  Mine sat atop each muffin like a jaunty cap.  If I had known I might have pushed them down into the batter or even crumbled the cheese over the top. 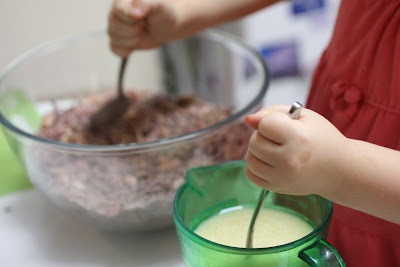 Sylvia was delighted to be able to help with the muffins.  Imagine how much fun she had stirring two mixtures at once (and my visions of the mixtures all over the floor)!  She really should have been eating her dinner.  However, we were both too excited about the muffins.  I am no stranger to chocolate in savoury recipes.  Yet this was a new idea and promised a totally different taste than I had ever had before. 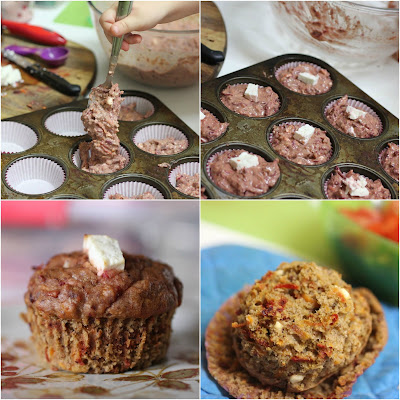 The muffins confounded the senses.  The chocolate smell is one our noses are conditioned to believe is sweet.  Yet they tasted salty.  The texture was light like a cake.  But it was dinner.  Brown and yet colourful.  Sylvia seemed to like nibbling at the muffins but never finishing one.  I am not sure how much she liked them. 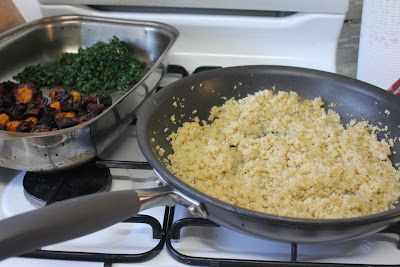 With our savoury muffins smelling all the world like dessert, it didn't seem at all odd that the rest of dinner looked like rice but was actually cauliflower.  I have cooked cauliflower rice years ago - with purple cauliflower, which I highly recommend if you get the chance - and tried it in 'raw' mock fried rice.  It is fun.  I was drawn in by Jacqueline's lovely photo on Tinned Tomatoes. 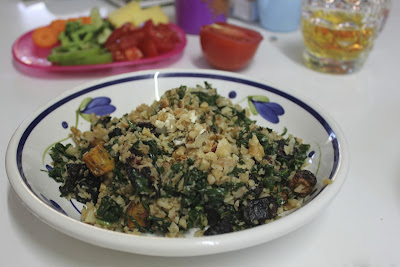 Sylvia loves rice so much that she agreed to try it, despite it including onions, so long as she could have soy sauce with it.  This affected the way I cooked it to be plainly flavoured so I could give her some before adding vegies.  There was no hiding what I was doing.  She watched me process the cauliflower into 'rice' in my blender.  So I was delighted that she gobbled it up.  I also really enjoyed it.  We also added some chopped tomatoes and cooked broccoli on the side. 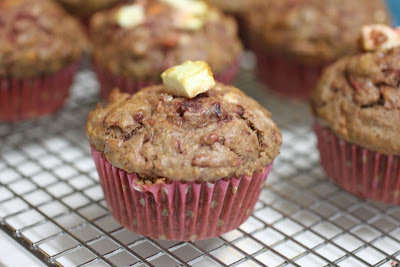 Unfortunately there is a sad ending to that happy evening.  Our lovely pussy cat, Zinc, was attacked on the night we baked the muffins.  The change of season is hard on a white cat who must stay inside to avoid sunburn but must come in early as the nights draw in.  Zinc stayed outside a wee bit long on that balmy evening and was bitten by another cat.  It was terrible to have her bleeding and in pain.  We took her to the vet the next day for an antibiotic and she has recovered well.  All I had energy for that night was a simple pumpkin soup.  The leftover muffins went really well with it and made it into a decent meal.

Measure out milk with vinegar and set aside while you prepare the dry ingredients (I did this using a large jug).  Mix the carrots, beetroots, flours, cocoa, cayenne pepper, baking powder, bicarbonate of soda and salt in a large mixing bowl.  Stir eggs, oil and two thirds of the goats cheese into the milk mixture.  Pour wet ingredients into the dry ingredients and gently mix until combined.

Spoon batter into prepared muffin tin (I filled my cupcake papers to the brim).  Bake for about 20 minutes or until a skewer inserted in the middle comes out clean.  Cool on a wire rack.

Toss carrots, beetroots, olive oil and salt in a large roasting tin and roast til soft (90 - 120 minutes for me, possibly less for more powerful ovens). Set aside.  Meanwhile toss kale in oil until coated on a heated frypan (medium heat).  Add a pinch of salt and cook for a few minutes.  Set aside.  Fry onion in oil in the same frypan for  about 5 to 10 minutes until cooked.  Add garlic and fry another minute.  Add cauliflower and stir a few minutes.  Add water and stock powder.  Gently simmer until cauliflower cooked and water absorbed (about 15 minutes minutes).  [At this point I set aside some for Sylvia].  Stir through roast vegetables, kale, feta and walnuts.

On the Stereo:
Big Jon Faine: spoof song by Dave O'Neill
Posted by Johanna GGG at 23:26