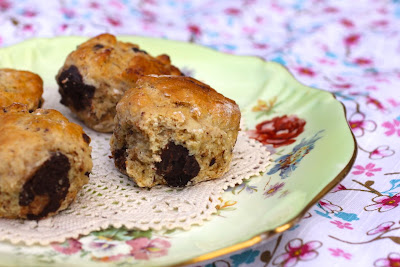 Driving home from kinder, Sylvia told me about the Mini Maestros visitor who had sung songs and had a kissing bee.  Actually I have decided she would make a great politician because most of the time when I ask her about her day, the answer is don't remember.  Planning dinner is another thing altogether.  She loves to give advice.  I had leftover tomato soup and suggested I make us savoury scones.  Sylvia insisted they should be sweet.

With sultanas, she suggested.  I gently reminded her that she picks sultanas out of most baked goods these days.  Maybe dates?  Too big.  Chocolate?  That got a big smile from my little girl and started my mind ticking over.  Choclette has chosen honey for the We Should Cocoa blog event this month and I have had all sorts of wonderful ideas about what to make.  I've considered adding chocolate to Delia's honey spice cake, Meat Free Mondays' baked apples, popcorn snack bars and even Deb's amazing Bee Sting Cake.

Then on that car ride home, I suddenly decided I could add some honey to the choc chip scones.  They must be white scones with choc chips, insisted Sylvia.  (Unlike my dad who cannot abide choc chips in baking!)  At home I found an approximate recipe and devised ways to make it a little healthier.  I found this useful advice on substituting honey for sugar.  After our soup, Sylvia had a bath and I baked the scones.

By the time we had sampled a scone, Sylvia was ready for bed.  (Well E and I thought her ready for bed.  She disagreed but went to sleep quickly after reading about Dame Slap's School in the Enchanted Wood.)  E and I then had a cup of tea and a buttered scone in front of Folk Britannia.

The scones were lovely and soft, despite my decision to use some wholemeal flour, using less baking powder and not letting the dough rest.  It was a particularly sticky dough but I just didn't have time for it to rest if Sylvia was going to taste one.  In fact as I ate the scones, the wholemeal flour seemed so right.  I think it reminded me of that hippy 1970s thing of combining honey and wholemeal flour in baking.  Then I had a go at presenting them with a doily, as recommended by the CWA (which is about as far from the hippy vibe as you can get).

I was quite excited when Choclette challenged us to make a chocolate and honey recipe.  Some of my favourite recipes (below) feature this combination.  Honey is a wonderful sweetener because it has such depth of flavour and the stickiness give a lovely softness to baked goods.  (I once baked a dish using honey in one batch and maple syrup in another and the texture of the honey batch was far superior.)  Whenever I taste honey (and it is not often) I am filled with nostalgia.  It takes me back to childhood lunches that finished with soft fresh white bread, spread with slabs of butter and pools of golden honey.  Oh joy!  The best honey was yellow box, according to a presentation that we had at our primary school (in the days before everyone got excited about manuka and Dame Slap got changed to Dame Snap in The Enchanted Wood.)

Choclette has noted the Cornish bees have had a hard time of it lately.  It seems this is the case in Australia too.  We spoke to a beekeeper at the recent CERES Harvest Festival who was telling us how there has been a downturn for honey production in Australia.  (According to this report, it is due to climate change).  For those locals interested in honey, there is a Honey Week Celebration at the Collingwood Children's Farm on Sunday 28 April this year.

Enough rambling thoughts about honey.  I am looking forward to Choclette's round up of chocolate and honey treats.  Meanwhile here are a few favourites from my blog and some tempting recipes from around the interwebs.

Mix flour, chocolate and bicarb soda in a medium large mixing bowl.  Melt the butter in a large jug in the microwave (or a little saucepan on the stovetop).  Add honey, egg and milk and mix well.  Pour wet ingredients into dry and gently mix until all combined.  It will come together into a sticky dough.

Liberally sprinkle flour on a clean surface and place the dough on the flour.  Sprinkle dough with more flour and pat down to about 1 1/2cm to 2cm thick.  (I think mine was more like 1 1/2cm which was fine for my small scones).  Take a round scone cutter and dip in flour.  Cut out scones and place on greased trays close together.  Very gently knead leftover scraps of dough and repeat the patting down on flour and cutting out scones.  Do this until no more scraps are left.  Brush milk over the tops of the scones.

Bake scones for 10 to 15 minutes until golden brown on top.  (If they brown quicker at the sides take these off the tray and return middle ones to the oven.)  Wrap scones in a clean teatowel and serve warm or at room temperature.

*NOTE I couldn't taste the honey in the scones when hot out of the oven but it was there in the scones when room temperature.   When hot, I wondered about using twice as much honey next time and reducing some of the milk because the chocolate was so intense.  Once cooled the scones were sweet enough if you like a scone that isn't overly sweet.  I don't think they need butter but E likes a bit of butter on his scone.

On the Stereo:
Brick Walls and Barricades - Kasey Chapman
Posted by Johanna GGG at 21:46