Sushi with sticky walnuts and edamame 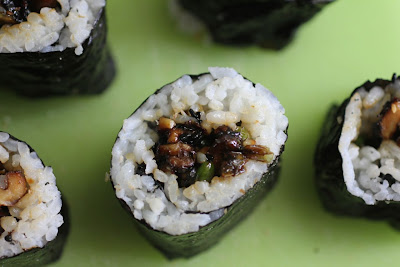 This is a recipe for jaded sushi lovers.  You know who you are.  At lunchtime you wander the foodhalls looking at the same old vegetatrian sushi options.  Vegetables or avocado.  You want inspiration!  You want flavour!  So here it is in the form of an amazing sticky walnuts and edamame stuffing. 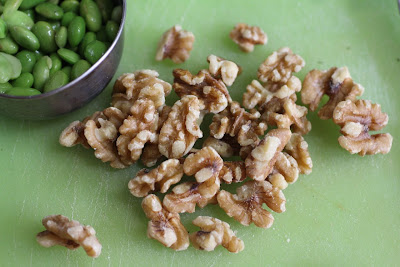 This walnut and edamame filling is so good that I am still having sweet dreams about it days after I ate it.  In fact you don't even need the sushi wrapping.  It is good enough to just eat straight from the bowl.  It is probably no small coincidence that it contains two of my favourite seasonings, maple syrup and tamari.  The only warning I will give is that it is very filling. 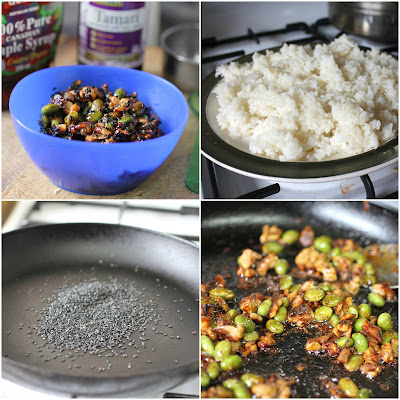 I first made this sushi a few weeks back for lunch on a lazy weekend.  We planned to make sushi again for lunch yesterday on the way back from the pool but the pull of the library was too strong.  Instead it was cheese pita and dosa masala in the mall before a leisurely visit to the library.  No matter.  The pull of sushi was strong also.  We made it for dinner. 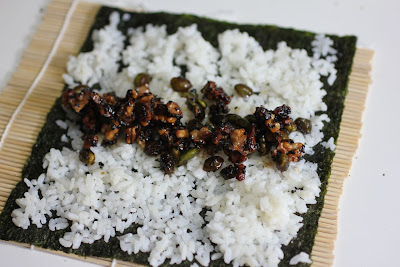 As I mentioned recently, we have been making sushi at home rather a lot.  Our local shopping strip offers far more falafels and pita bread than sushi.  I love sushi but it often seems lacking in protein.  Hence my trawling the interwebs for ideas.  I love how this packs the sushi with protein.  It does however also add more oil, sweetner and salt than usual.  More flavour too. 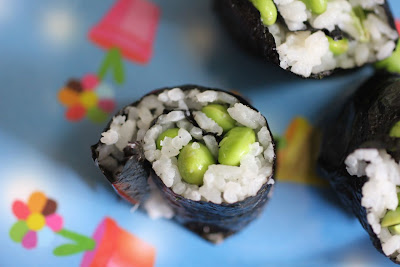 Sylvia was not so sure about the edamame and walnut concoction.  So the first time I made it she just had edamame in her sushi.  I still seasoned the sushi rice because Sylvia was eating some of it but I am sure there would be enough flavour without it.  The walnuts taste like sweeties, with a dash of salt and some extra crunch from the sesame seeds.  Oh yes!  The second time Sylvia discovered just how good the candied walnuts were but still did not understand that the edamame cut through the intensity.  Maybe the next time she will get it.  Because there will be a next time.  I can't wait.

I am sending these sushi to Amy's Slightly Indulgent Tuesdays.

Cook sushi rice by placing in a small saucepan with one and a half times the amount of water.  Place a lid on, bring to the boil and then simmer (covered) for 20 minutes over a very low flame.  When cooked, stir in some sushi seasoning if using.

(*NOTE: I usually cook 1 cup of sushi rice in 1 1/2 cups of water because we always use leftovers.  [update 2014: I have changed the quantities for 1/2 cup because I find I need 1 cup water not 3/4 water.]  I was using about 3-4 tbsp rice wine vinegar, 1 tbsp sugar and 3/4 tsp of salt as I did here.  Then I couldn't find rice wine vinegar and had to buy sushi seasoning.  Now I just pour in 2-4 tbsp, taste and add more if needed.  Hence these quantities are a bit vague.)

Once the sushi is cooked, cool to either lukewarm or room temperature.  I often spread mine on a plate and put it in the freezer.  (NOTE: the original Food and Wine recipe I used suggested it was fine to use hot rice but I like to cool it down a bit.)

While the rice cools, dry fry the sesame seeds until fragrant.  Set aside.  Heat the oil in the frypan and fry the walnuts for a few minutes until they crisp up - you can tell because they will smell wonderful.  Add the edamame, maple syrup and tamari and stir constantly until it thickens slightly.  This should only take a minute or two.  Stir in the sesame seeds and remove from the heat.  Cool slightly before using.  The mixture will harden slightly as it cools.

Take one nori sheet and lay down on a bamboo mat with the shiny side down.  Spread the rice over all of the sheet except a small line at the far edge.  I use the back of the spoon to flat against the nori as much as possible.  Scatter about half the filling in a line across the middle.  Use the bamboo mat to fold the nori and rice across the filling so that the filling ends up in the middle of the rice and roll up.  (NOTE: The original Food and Wine recipe suggests crushing a rice grain on the edge to help seal the sushi.)  Cut into smaller pieces and enjoy!

On the stereo:
Let no man steal your thyme: the Shelagh McDonald collection
Posted by Johanna GGG at 22:03