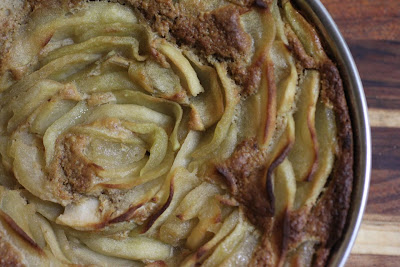 Last year, Sylvia undertook her first research project.  She asked all the kids and teachers at her child care centre what was their favourite cake.  One of the teachers wrote down the answers.  I was surprised at the variety of cakes nominated.  Most of all I was surprised to hear that Sylvia's favourite type of cake was apple.  What!  Not chocolate!

If you look at the cake recipes in my index you might notice how much I love chocolate cakes.  If you look at my Pinterest sweet board you may notice quite a few apple cakes.  It seems I bookmark many apple cakes but don't bake that many.  It has taken me some time as an adult to come to appreciate apple cakes.  Now that I know Sylvia loves them, I have many good intentions to bake more.  Last week I made a superb apple cake that was delicious despite many problems in making it.

I was initially attracted to the Apple Cider Cake on Jen's Delicieux blog.  It looked gorgeous with the apples arranged on top like a rose.  I admire many photos of cakes but once I see the recipe I often lose interest.  This one was different.  I have been seeking a recipe for an apple cake that has the apples cooked once before baking and then again when the cake bakes in the oven.  This recipe had apple slices cooked in apple cider and spices before being added to the cake.

One of my main problems with making this cake was deciding not to follow my gut instinct.  Firstly I thought 6 apples a lot for a cake.  But I chopped them and cooked them and tried to sort out the most cooked third and blended that into an applesauce.  I again ignored my instinct again when the cup of applesauce seemed too much.  I tipped it in and added some extra flour because the batter was so loose.  After creaming the flour, I also added the flour before the egg in a moment of distraction.  It was one of those days.

I loved the appearance of Jen's cake with the apples arranged on top.  I can't remember at what point I suspected I should have sliced the apples more thickly but when it came to arranging flimsy little slices, I was sure they were too thin.  This might explain why I had too many slices of apple (see two above photos).  As I was ready to put the cake in the oven, I looked at how full the cake tin was.  Too full.  I ignored my gut instinct and baked it anyway.

Midway through baking, I turned the tin around and saw that cake mixture had risen over the sides of the edge and fallen onto the oven floor.  Too late, I put a tray under the cake tin to catch any more drips.  By the time the cake came out of the oven it had lost its good looks.  I was too disheartened to bother with a glaze.  E made a comment about sci-fi movies and craters on the moon.

So much had gone wrong with the cake.  Yet, for all the problems, we all loved it.  Sylvia did.  Phew!  She often tells me she loves apple cake.  Even E enjoyed it, despite not usually liking fruit in cakes.  My mum visited and loved it.  It is just the sort of cake I have been searching for with the soft melting apples on top.  I left out most of the spices and made a few more subsitutions.  The apples had just enough subtle flavour for my tastes.

I had initially decided not to post about this cake.  Then when we loved it so much, I decided that my notes here on what I did will be very helpful for me to develop the recipe and hopefully might help others who are searching for their own perfect apple cake.  After all, despite all the problems, this may just be the best apple cake I have ever baked!

I am sending this cake to Roz of the More Than Occasional Baker for the Alphabakes challenge that she runs with Caroline of Caroline Makes.  Each month they choose a letter for key ingredients and this month it is the letter A.  A for apple!

Apples:
Cake:
To cook the apples:

Put topping ingredients in a medium saucepan, bring to the boil and simmer about 3 to 4 minutes until just tender.  (I misread the recipe and didn't see that I was meant to bring the cider, sugar, vanillla and cinnamon to the boil before adding apples.)  Remove about 1/3 of the apples with a slotted spoon.  Blend to make an applesauce.  Mine made about 1 cup but I think I only needed half as much for the cake.  Set aside remaining apple slices.

To make the cake:

Preheat the oven to 180 C and grease and line a 22cm tin.  (My tin was too small for my batter so next time maybe a bigger one.)

Beat butter (or margarine in my case) and sugar in a large mixing bowl (I used a spoon rather than electric beaters).  Add eggs  (I actually added flour before the eggs but that was due to distraction as I usually would add eggs here.) and then 1 cup (but only 1/2 cup next time) apple sauce, beating to mix well.  Gently stir in flours, almond meal, baking powder and bicarb of soda.  Lastly stir in yoghurt until just combined.

Scrape the batter into the prepared tin.  Arrange circles of the apple slices (drained of the liquid) on the top of the cake, starting at the middle of the cake and working your way outwards.  I baked mine for 1 hour and 30 minutes but if my batter hadn't been so wet it might have taken closer to the original 30-35 minutes.  A skewer inserted in the middle will come out clean when cakse is cooked.

[The original recipe also suggested reducing the reserved apple cider mixture to a syrup to glaze the warm cake but I didn't do this.]

On the Stereo:
Time Stands Still: the Collection: Rush