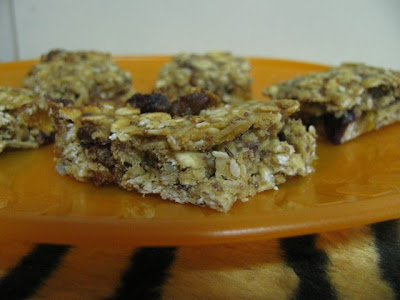 Everyone has one. Even me. Yet I wanted more. You can never have too many muesli bar recipes. Over the past month, I have been on a mission to find the perfect muesli bar. After three attempts I have found something close to perfection. Good enough to post.

I have many expectations of this muesli bar. Lots of oats, no flour, lots of dried fruit, not too sweet, no large chunks of nuts. Most importantly I wanted them to hold together. It shouldn’t be that difficult for a muesli bar to hold its shape. Yet I have made two batches of muesli bars that have crumbled so much they have ended up as muesli. Not bars! 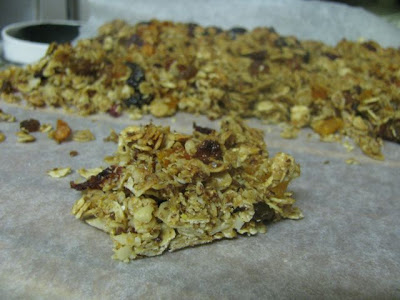 I don’t blame other bloggers whose recipes didn’t work for me. Anyone who reads this blog knows that I meddle with good recipes. I used flaked coconut rather than dessicated coconut and reduced the honey in Ashley’s Granola Bars. 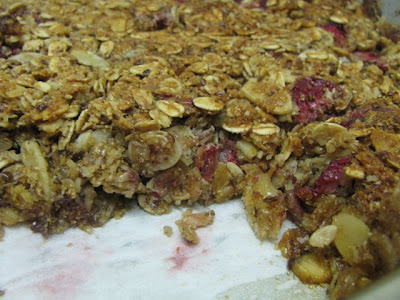 I wanted to follow Erin’s Strawberry Granola Bars recipe. I was attracted to the idea of using up strawberries in this way. I wanted my bar to be fruity. I added some coconut and LSA. She warned that the berries made them more crumbly. Mine were damp. Such a shame. They had a wonderful chewy top. But fell to bits. I rescued the mixture by returning it to the oven in bits to dry out. It made a wonderful muesli. Maybe these muesli bars would have been better with more cooking. 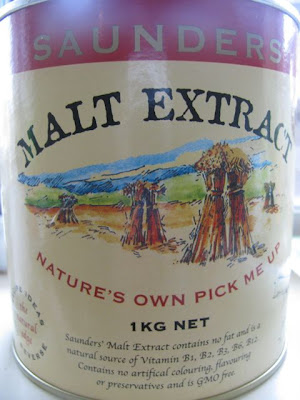 I couldn’t find the brown rice syrup that Erin used. I purchased some malt extract instead. It is a thick and sticky syrup which reminded me of honey. Darker, far less sweet and less refined. Surprisingly it contains Vitamin B12. I read it is often used with other sweeteners. I used it with maple syrup. I think it added to the chewy crust. Be warned that it is made from barley and is not gluten free.

Finally I decided to try some tahini as a binder. The internet didn’t yield enough inspiration for tahini. Instead I found there were plenty of peanut butter granola bars recipes. I tried the Cherries & Chocolate Peanut Butter Granola Bars. I used tahini not peanut butter, and made a few other little changes. 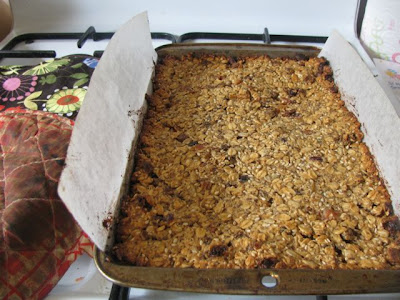 Finally I had my eureka moment! They hadn't even cooled. Yet I could see it was a bar that would stay together. I took some slice to work for snacks. Even after the rough and tumble of being in my bag, shunted about by my bike commute, it still was in one piece. That is success.

Did I mention I wanted them to be child-friendly? Hence my decision to avoid large chunks of nuts. Sylvia loves muesli bars right now. “What do you want for dinner?” I asked her on Monday. “Mia” she replied with a toddler’s enthusiasm. I have heard the word often enough to know it means muesli bars. (Does that mean I could be known as Mama Mia!) My mum says they are sweet enough for her. All that dried fruit was enough for me. Sylvia prefers sweeter bars. 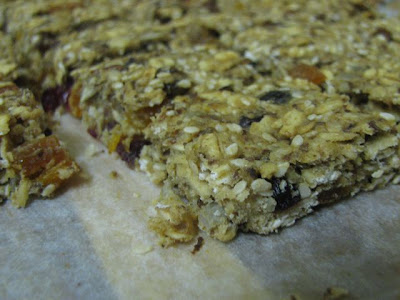 As I said at the top, the bar wasn’t perfect. There are too many options to have one perfect bar. As well as wondering about adding a tad more sweetener, I would also love some coconut and molasses. I will keep trying other combinations. Yet I hope to return to these bars.

This batch is being sent to Ricki and Kim’s SOS (Sweet or Savoury) blog event that asks bloggers to share recipes made with whole foods, whole grains and minimal processed foods. This month they are seeking recipes featuring sesame.

Mix together the tahini, malt extract and vanilla essence until smooth. Add remaining ingredients and stir until combined. Tip into prepared tin, press down evenly and smooth with the back of a spoon.

Bake for about 30 minutes or until golden brown and starting to crisp at the edges. Cool in tin about 10 minutes and then use the overhang of the baking paper to transfer the slice to a chopping board to cool completely. Use a sharp knife to cut into squares or bars.