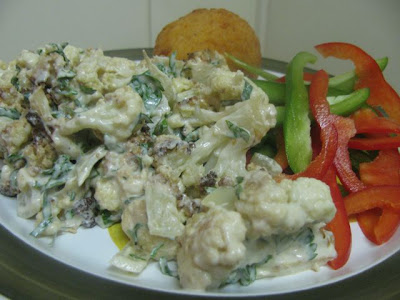 A couple of weeks ago I went to the city with Sylvia to buy new Doc Martens. I finally re-discovered an alleyway that I was shown in a literary tour of Melbourne some years ago. It is called Heffernan Lane and is noteable for the artwork that could be mistaken for your regular street signs. 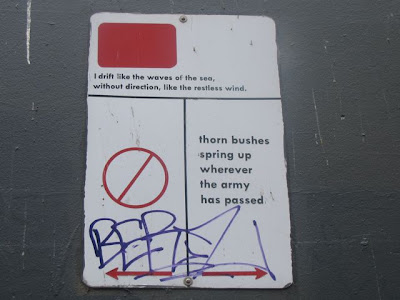 But look closely and the text is unlike the usual regulations and restrictions on such signs. 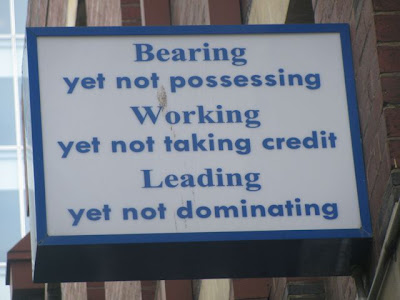 Above is my favourite sign. Less poetry and more regulation than the first sign, it is good advice that a lot of us could heed. If only more street signs imparted such wisdom, we would live in a better world. Though, maybe not as many people don't take much notice of street signs (as I have learnt now that I regularly drive down clearways at peak hour)! 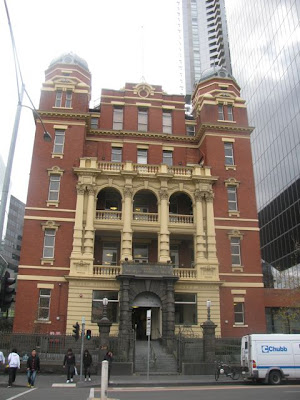 I had to take some photos of these signs and once the camera was out of the bag, I found much of interest for pointing and shooting. Coming out of Heffernan Lane, you see the remaining buildings (above) of what was once the Queen Victoria Hospital that covered a whole block. 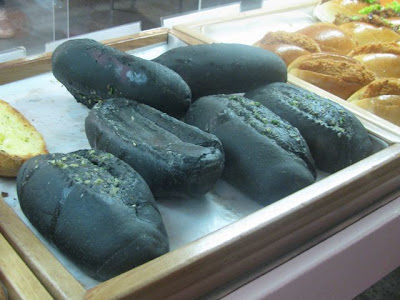 Instead of a hospital much of the block now houses a Queen Victoria Centre with a food court. The (Asian-style) Bread Top shop is always fascinating for all the weird and wonderful bread on sale there. E has brought home the bamboo charcoal buns because he was so amazed at how black they were. It looks unnatural but tasted good. 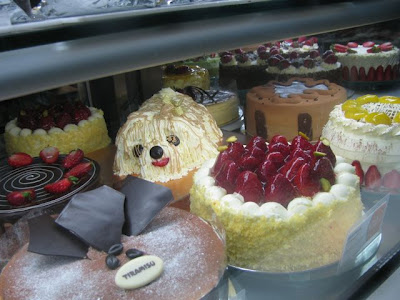 The bread is very soft unlike than the dense sourdoughs that I enjoy. But I do love to look. This cake that looked like a puppy dog was very cute. 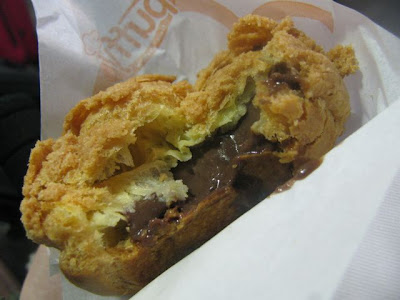 Instead of Bread Top, I yielded to the temptation to try one of the custard filled cookies at Puffy because I had never seen such a cookie before. It was delicious but I would prefer a choc chip cookie if I wanted a treat so probably would not go back there in a hurry. 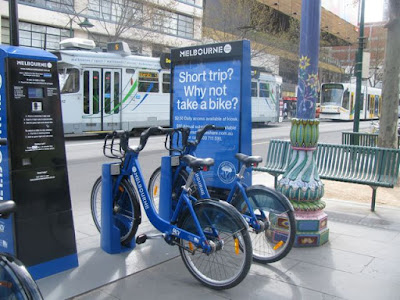 Then I wandered down Swanston Street past the State Library. There is one of the new bike racks outside it. I would love to try these that are outside my workplace but I think I need to remember my helmet and work out how to alter the height of the seat (unless someone else as short as me has been riding the bike). Soon, I hope! I also liked this photo with the painted lamp posts - now that is my sort of street art! 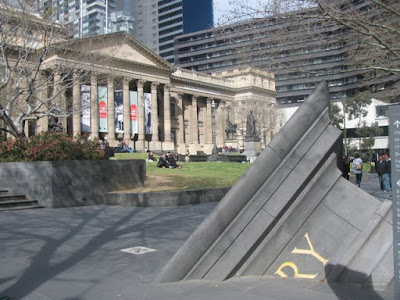 When it comes to street art one of my favourite pieces is just along the road. This chunk of cornice seems like it has fallen from the library after some science fiction event - you can't help but look for which bit of the building it came from.

Actually, it is not the library that is missing but the museum. It used to live in half of this building until it was moved to a big shiny new home in the Carlton Gardens. But I still miss the old-fashioned ramshackle museum with its rows of old cars by the entrance and the huge room of dinosaur skeletons and stuffed animals by the exit.

Enough wallowing in nostalgia. Onto the recipe. At home was a large cauliflower bought on a whim. I found a recipe by Yotam Ottolenghi for Fried Cauliflower with Tahini. The original recipe called for frying cauliflower in 500ml of sunflower oil. That is not my way so instead I roasted mine. Then I used a similar sauce to dress the roasted cauliflower. 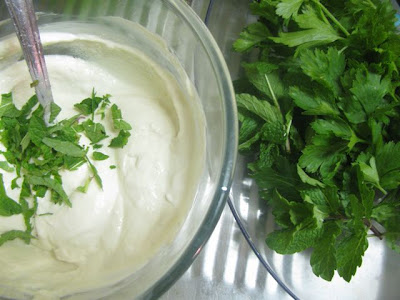 The sauce interested me because it had tahini, pomegranate molasses, and fresh herbs that I had on hand. On the first night I found it quite intense. We had it with a rice ball and some capsicum. I enjoyed it more on the second night when more of the sauce was absorbed into the cauliflower and the flavour of the herbs were more prominent among the heavy tahini. It might have helped that it was more of a side dish and went surprisingly well with pesto and pasta.

So my verdict is that too much too soon is just not quite right. Ottolenghi mentions that this recipe was inspired by a trip to Israel. He suggests serving it on a mezze platter or just with pita bread and tomato. I think that maybe this dish would be great served with Turkish bread, falafel and tabouli. 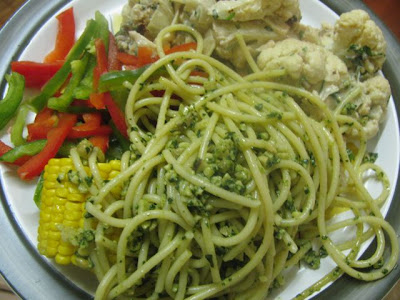 I am sending this to Ann of Mom Gateway who is hosting this month’s Grow Your Own. This event, coordinated by Andrea of Andrea’s Recipes is for bloggers to feature home grown produce in their cooking. I used mint from our garden and parsley from the neighbour’s garden.

Toss cauliflower and onion with garlic, olive oil and salt in a large roasting pan. Roast at 220 C for about 45 minutes or until the cauliflower is starting to brown at the edges and is soft when pierced with a fork. At this point I turned off the oven and left the cauliflower in until I was ready to use it.

While cauliflower is roasting, mix the remaining ingredients in a small bowl. Use a bit of water if you need to think it down. Season to taste. Mix with roasted cauliflower and serve warm.

I put leftovers in the fridge overnight and served the next day just slightly warmed in the microwave. It was as good if not better than fresh – less creamy but the herby flavours had had time to infuse.

On the Stereo:Revolver: The Beatles
Posted by Johanna GGG at 22:44