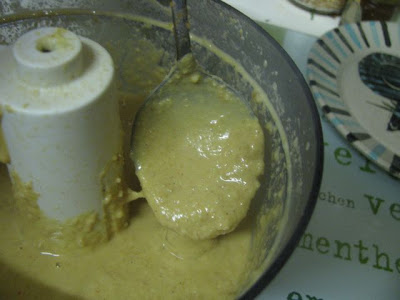 On the weekend we went to the city to see the Tim Burton exhibition at ACMI. The prodigious output of drawings was impressive albeit overwhelming. They all bore the hallmark's of Burton's inimitable kooky spooky style. I especially loved seeing some of his film memorabilia. 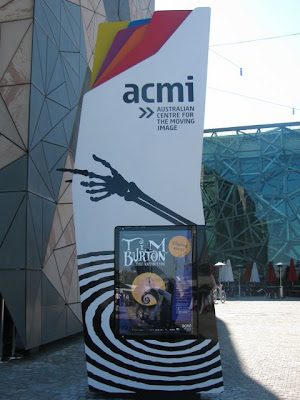 It was great to see the angora cardigan from Ed Wood, the Cat Woman outfit from Batman and the hands from Edward Scissorhands. E told me that the screen clips are not necessary any more (thanks to Youtube) but it was great to watch them while comparing characters to Burton's sketches. I also appreciated the crayons and paper at the end of the exhibition. Perfect for small children! A fascinating exhibition, though it would have been nice to go when it was quieter! 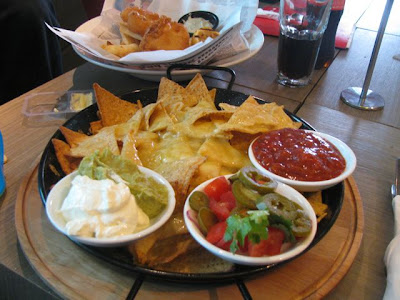 Afterwards we went to the ACMI Cafe where I had nachos for lunch. It has been some time since I last ordered nachos when eating out. I got tired of ordering them and finding that they just weighed me down with too many corn chips. These ones were good, though still a bit heavy. Perhaps I needed to return to the original concept after a vegan trial went awry the previous week.

I am very fond of corn chips covered in melty cheese. But I keep finding tempting vegan cheezes in the blogosphere. The one that really caught my eye recently was Dreena's “Vegveeta” Cheese Sauce that Ricki used in her Layered Mexican Casserole. I then found myself with the right ingredients and the sauce was made. 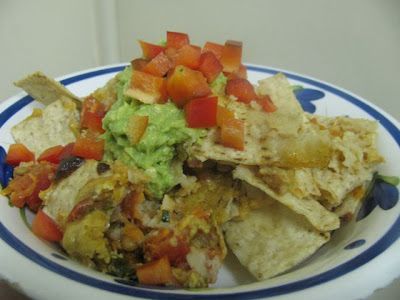 I have tried a few vegan cheeze sauces with mixed results. Fortunately I have never tasted velveeta cheese so at least I didn't have that comparison for Dreena's vegveeta cheeze sauce. It was an impressive tasting sauce if a wee bit heavy on cashews after I added cashew butter when my food processor wasn't doing so well grinding up the raw cashews. However the flavour was creamy, mellow and full of good flavour if a little lacking in salt.

I had thought I could try it on some nachos because I wanted it to be quicker than Ricki's casserole but I think I should have followed her example. The nachos were quite tasty but stodgy and had none of the gooey melting cheese strings of regular nachos like the platter ACMI serves. 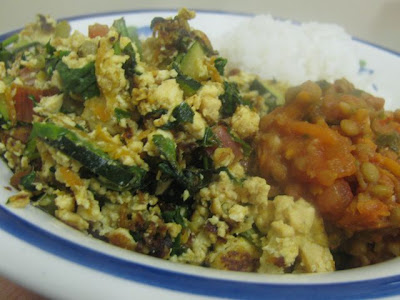 Fortunately I had cheeze sauce leftover the following night and it made the best ever tofu scramble. I mixed some cheese sauce in with tofu, a bit of tamari and lots of vegies over a high heat. I am not sure what I did but it was so tasty with crispy bits. Served with rice and my leftover lentil and tomato salsa, it was an excellent meal.

Previously on Green Gourmet Giraffe:
This time last year: All About Apples: history, culture and soup
This time two years ago: Milestones and Rissoles

Vegveeta Cheeze Sauce
Adapted from Viva Le Vegan
Dreena says to just blend everything in a food processor. Even with pre-soaking and blending the raw cashews in milk, the nuts did not grind finely enough until I added some cashew butter. In future I might use cashew butter instead of raw cashews - at least until I own a more powerful food processor. Highly recommended in a tofu scramble.

On the Stereo:
The Captain: Kasey Chambers
Posted by Johanna GGG at 23:05