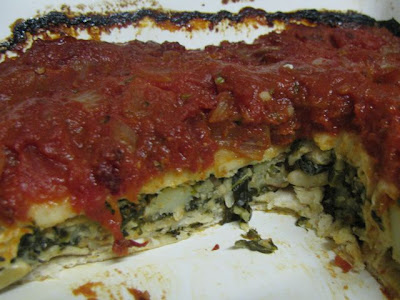 As I mentioned in my last post, fellow blogger Lisa came to dinner last week. I don’t have dinner guests as often as I used to but I invited her on a day I wasn’t working and got most of the preparation done while Sylvia had a long sleep.

Lisa helped herself to the pea pate while Sylvia ate her vegies, chickpeas and tofu. I think Sylvia felt quite sorry for Lisa with all that green gunk because she began to slip her the odd chickpea or tomato. But we had more to come. 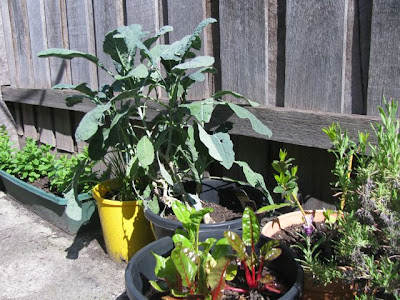 I had decided to make the PPK’s Potato and Kale Enchiladas. It might give you some insight into the cooking if I tell you that my first task was to ring my mum and check the kale in the backyard was ready to pick. Using kale from a pot meant that I didn’t have as much as the recipe called for. I used the remainder of a bag of spinach to bump up the greens and there was plenty of colour. My tortillas must have been much larger than the PPK's – they used 12-14 and I used 6.

[As an aside, I got this recipe off the web last week. My timing was excellent because the link is not working this week. I think the PPK might have updated their site but can’t be sure. I gather that the recipe can be found in Vegenomicon) 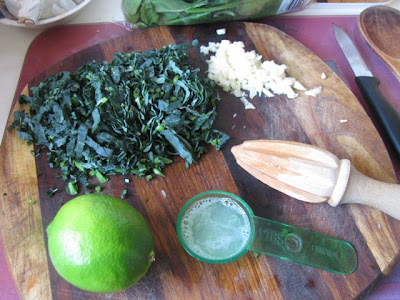 I showed a reckless lack of planning in assembling the enchiladas. I chatted to Lisa and kept an eye on Sylvia rather than reading the recipe. It was only when I looked at the recipe afterwards when making blog notes that I found I was meant to heat tortillas and dip them in the tomato sauce before rolling them around the filling. I wouldn’t have had the concentration for such messy work. Besides, they worked fine my way.

The enchiladas were spicy, smoky and tasty with lots of sauce on top but not too heavy. I thought the potato and kale filling had a bit much lime juice and salt so I would go easier with these next time, though the flavours weren’t overwhelming in the final dish. There was also dessert but I’ll tell you about the banana choc chip cookies another time. 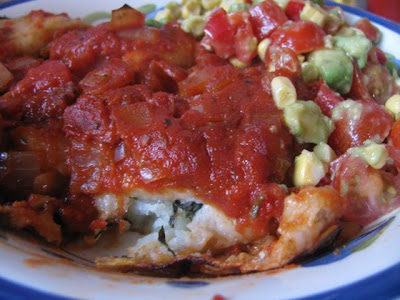 We had a lovely evening with Lisa. Anyone who has read her eclectic blog knows she is an interesting person. She recently spent time in Edinburgh where E hails from and gave lots of attention to our pussy cat, Zinc. Just the sort of blogger I am happy to have living just around the corner.

Previously on Green Gourmet Giraffe:
This time one year ago: Purple Pleasures, Purple Dinner
This time two years ago: WTSIM: of cats, ukeleles and enchiladas

To make enchilada sauce: Fry onion in olive oil until it is quite soft. (This takes quite a while 10-30 minutes – you can start on potato and kale filling while it cooks or play with a small child.) Add remaining ingredients and bring to the boil. Remove from heat and set aside.

To make potato and kale filling: peel and dice potatoes and cook in boiling water for 15-20 minutes until soft. Drain and set aside. Heat oil in a large saucepan. Fry garlic gently in oil, stirring constantly until garlic is lightly browned (this only takes about a minute). Add kale and stir over medium low heat about 2 minutes, then add spinach and cumin seeds for another 2 minutes.

Add remaining ingredients and stir for another 3-4 minutes until the liquid is absorbed. While the mixture is cooking, use the back of a wooden spoon to coarsely crush the potatoes. Go easy on the lime juice and salt, check for taste and add more as required.

To assemble: Lightly grease a largish casserole dish and preheat oven to 200 C. Lay a tortilla on a flat surface and spoon about 2 dessertspoons of the potato and kale filling into the middle and shape into a long strip. Roll up tortilla around the filling and place seam down in the casserole dish. Repeat with remaining tortillas. Pour enchilada sauce over the filled tortillas and bake for 40 minutes uncovered. Allow to cool slightly before serving.

On the Stereo:
Rose clouds of holocaust: Death in June