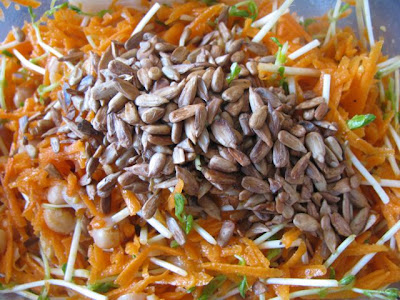 It was a busy weekend. A barbecue lunch for my sister Susie’s birthday. Lots of good food and kiddie mayhem. We test-drove a new car (well, it was new to us). We decided to buy it. Our old car that has been a faithful steed for the past 8 years took umbrage and broke down on the Geelong Road. A tow truck ride, a service station sojourn and a ride with my brother found us arriving at home rather late. 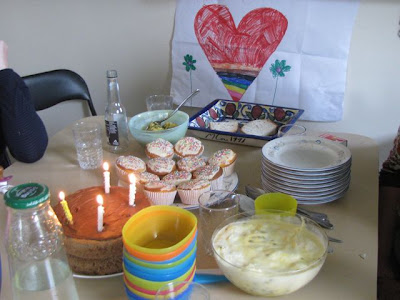 Nevertheless I was pleased to see the sun shining on Sunday for Kristy and Toby’s vegan potluck bbq. I love bbqs with my family but it is a treat to go to a bbq with no meat. Unfortunately the weekend did not find me with much time and energy for making food to take along. At least salads are quick to put together. I took my favourite lentil salad to my family and I made a carrot salad to take to the potluck bbq.

The carrot salad is one from Food Stories that I bookmarked a couple of years ago when Helen had a great series of salads. She used alfalfa sprouts but I went for the snowpea sprouts because I get worried about soggy boxes of unloved sprouts in the fridge. I also decided to toast the sunflower seeds with tamari because one of my housemates used to do that and I loved them. 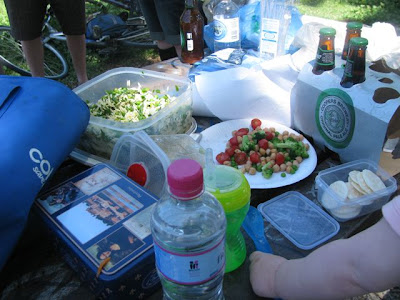 So I packed some salad and some plain vegies and chickpeas for Sylvia, she grabbed dolly and her blanket, and we hopped on the train to the park. My salad offering didn’t have a wow factor but I always think a good salad is welcome at a barbie. Once the sunflower seeds were mixed in they were a little less impressive but the salad was full of vegies, protein and mustard. 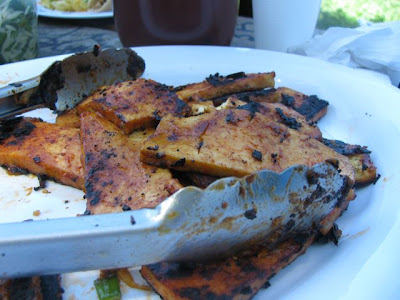 It is always great to meet other bloggers at potlucks and have my prejudices challenged. When we arrived Toby was cooking Vegan Dad’s ultimate BBQ tofu on the barbecue. I never feel very brave about using public barbecues or making BBQ sauce but this was one of the highlights of the day. I loved how it was charred and smoky as well as full of sweet and spicy flavours. 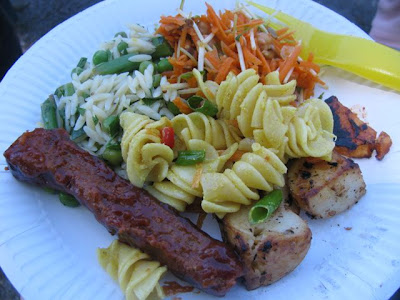 I enjoyed a plateful of interesting dishes. My carrot salad, Toby’s tofu, MeVeg’s lemony asparagus risoni salad, Craig’s curry pasta salad and roast potatoes. Lastly was Michael’s Kentucky BBQ Ribz which I have bookmarked but also felt a little shy of the seitan and sauce combination. It was great to taste it because it was excellent. All washed down by Krristy’s refreshing pomegranate lemonade with pretty mint ice cubes. 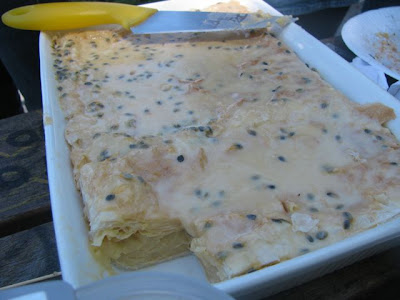 I was also pleased to be able to taste Cindy’s Vegan Vanilla Slice that I saw recently and bookmarked. I have had no trouble believing that this would taste amazing but have felt this is a little indulgent to make to eat at home. It was really good with creamy custard and the slightly crunch and tartness of the passionfruit icing.

There were lots of interesting options on offer for dessert. I enjoyed MeVeg’s velvety fudge though the coffee flavour was a little much for me. I had two cheesecakes. Keira’s lemon cheesecake was lovely and creamy. Kristy’s teasecake had a little more texture because it was made with millet, though I wouldn’t have guessed if she didn’t tell me but I did enjoy all the berries on top. 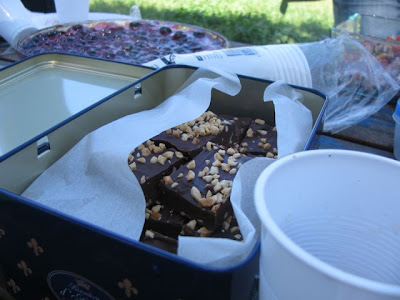 People were divided when the question arose of whether you could return to savoury food after sweets. I am one who can happily ricochet between the two. So after finding I had had quite enough sugar, I had one of Erin’s tofu kebab with mhummara sauce and roasted lemon. It was fantastic. Very spicy and far more lemony than I would usually choose but it left my mouth feeling so wonderfully zingy.

As for Sylvia, she ignored the vegies I brought along for her but she couldn’t get enough of Fat Fueled Vegan’s slightly sweet cornbread. She was full of frowns when she arrived (all those strange people) but broke out the smiles once she started playing on the nearby slide. I am sure she would have stayed longer but she was due for a nap by the time we left and had fallen asleep with dolly before we even reached the train station. 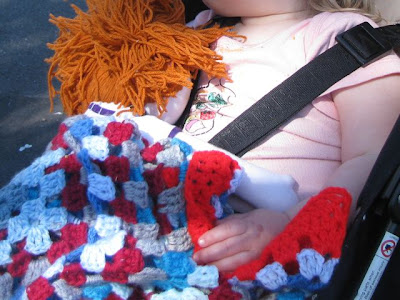 I had a great time. As always I didn’t get to try enough of the food on offer, or photograph enough or even speak to enough people but I did taste lots of interesting food and enjoy meeting up with fellow bloggers and foodies. Thanks Kristy and Toby.

Previously on Green Gourmet Giraffe:
This time one year ago: Snags, coleslaw and Julie/Julia
This time two years ago: My Personal Vegetarian 100 List

Gently fry seeds in a small saucepan with tamari (I added a little water to help to distribute tamari evenly) until seeds are dry and toasted.

Mix remaining ingredients together in a medium salad bowl. Check seasoning and add as required. Scatter with seeds.

On the stereo:
But, what ends when the symbols shatter: Death in June
Posted by Johanna GGG at 23:11