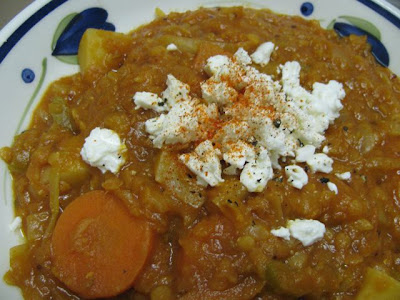 I went to my sister’s for dinner the other night and her partner offered to rock Sylvia in her pram. He was so gentle I had to tell him that she needed firmer rocking. So much about bringing up a baby is a matter of ducking and diving around conflicting advice and going with your own intuition but some of it is counter-intuitive. Rocking a baby hard, patting a baby hard or even wrapping a baby in a swaddling cloth to sleep are against our instincts. Yet they work.

In the same way, using preserved lemon seems counter-intuitive. When I first started using it, quite recently, I was surprised to find I had to rinse it first and to discard the flesh. The idea of throwing out the flesh and eating the peel just seems wrong. Then once you have done this, the taste is so weird – quite salty and bitter. But a little of this in a stew or salad adds a distinctive and interesting flavour. 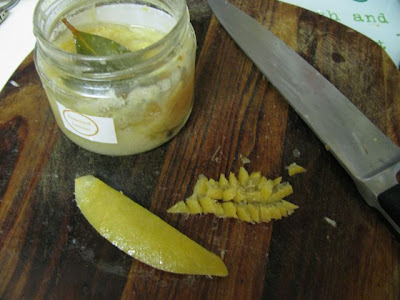 My first attempt recently at using preserved lemon was a stew that seemed a combination of a chickpea salad and a silverbeet sauté that I made last year. I also added lots of cauliflower, which I love. The stew was nice but a bit overwhelmed by the lemon. It was rescued the second night unexpectedly by adding a good handful of grated cheese. The notes of what I did are below.

After this stew, I saw Jules recipe for Red Lentil and Preserved Lemon Soup on Stone Soup. It seemed similar to my recent tomato lentil soup but the flavours were so different that I had to try it. One appealing aspect of the soup was the addition of fennel seeds which I was sure lingered somewhere in the pantry unused. I spent much time searching and discovering all sorts of treasures at the back of my spice shelf but no fennel seeds. In the end I decided to substitute mustard seeds.

By the time E came home from work, I was far behind in making dinner, thanks to my turning the spice shelf upside down. By then Sylvia was cranky, Zinc wanted me to come outside to play and I was feeling a bit ragged. As E walked in the door I thrust Sylvia at him and asked him to hold her while I chopped the last few vegies. These vegetables were chopped larger than usual in my hurry. Once that was done I could let it stew while I attended to our wee girl. 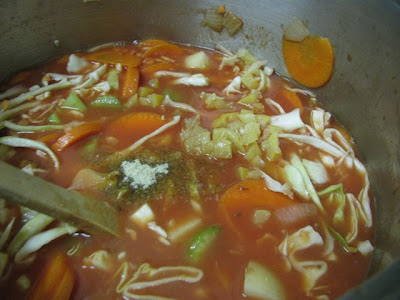 One of the reasons I made the soup was that I had some leftover feta from making the Red Onion, Feta and Olive Tart. The soup seemed to have a middle eastern flavour which would welcome feta. I forgot to put cayenne pepper in it so I sprinkled a bit on top of the feta.

I made a few other changes to the seasoning and vegetables. But mostly I was concerned that the mustard would not complement the other flavours. I need not have worried. The soup was hearty, spicy and delicious. E was very impressed and we both had a second helping because it tasted so good.

I am sending this red lentil and preserved lemon soup (the more successful of the two stews) to Lori Lynn of Taste with the Eyes who is hosting this month’s My Legume Love Affair: the eleventh helping of the event, which Susan of The Well Seasoned Cook founded.

Heat oil in a stockpot over a medium heat. Add onion and cook 5 min stirring occasionally until the onion is soft. Add garlic, ginger and spices and cook for a couple of minutes. Then add the remaining ingredients, bring to the boil, cover and simmer about an hour. Stir occasionally to stop it sticking to the bottom. Add more water if it is starting to dry out. Remove bay leaves. Taste and season. You can blend this soup but it was quite thick so I didn’t bother (and neither did Jules). Serve with feta cheese or yoghurt. 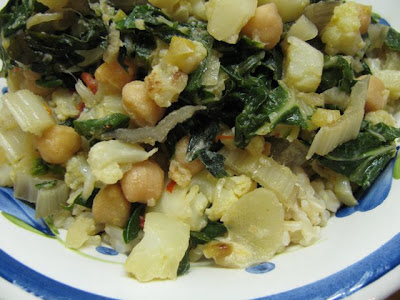 Fry onion in oil for about 5 minutes in a large frypan. Add garlic and fry another minute. Add cauliflower, silverbeet stalks, chickpeas, tahini and chilli paste. Cook about 20 minutes on a low to medium heat (I cooked the cauliflower for 20 minutes and another 10 once I put the stalks in but I think this was too long). Add silverbeet leaves, lemon juice, preserved lemon, soy sauce, agave and water. Simmer for about 10 minutes. Serve hot and sprinkled with cheese. It goes well with rice.

On stereo:
Lennon Legend: the Very Best of John Lennon
Posted by Johanna GGG at 12:17