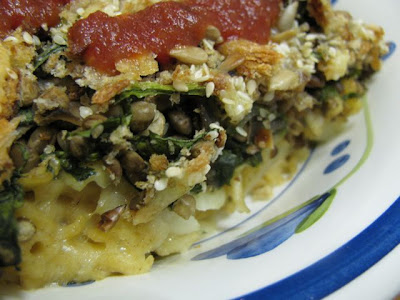 Every now and again, I use up leftovers and find the resurrection dish better than the original. I am in search of a perfect creamy potato bake and was taken with a spiced one. It really was not that great on the first night but the spices seemed to mingle nicely overnight and so I ended up with an interesting creamy pasta bake with potatoes, mushrooms, lentils and spinach as well as notes of cloves and nutmeg. An unexpected delight!

I will never forget doing one of these potato bakes – you know the one when you thinly slice the vegetables and bake them in milk or cream – when I had just moved into my first share house. It took hours and we were starving by the time it was edible. I kept taking it out of the oven and poking a knife into it quite regularly, willing it to feel soft and yielding. But it seemed to constantly have that unwelcome crunch that needed returning to the oven. 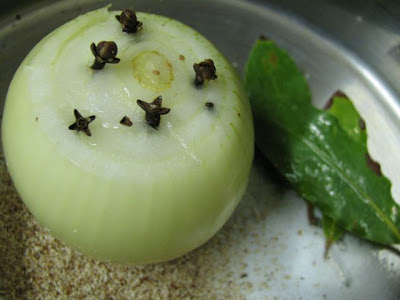 As I have been thinking about this potato bake, I thought I would share some ideas. One from my mum was to cook the potatoes briefly in the microwave before slicing. She also suggested heating the milk first and adding onion. Lorraine of Not Quite Nigella has an interesting potato and zucchini bake in which the potatoes are simmered in the milk first and then baked. She also used a large shallow roasting dish for lots of crispy topping. I also liked a similar recipe in The Age newspaper on the weekend that had grated cheese sprinkled between layers of potatoes. 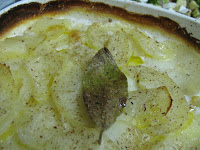 The potato bake that I made tasted just like milky potatoes the first night. Perhaps it was extra milky because I had a few less potatoes than the recipe called for. But after I served it I left the remains in the oven another hour and then turned off the oven and left the dish to cool. So the next day the spices were more prominent and the milk had turned beige and creamy. But it was too rich to eat alone so I concocted a pasta 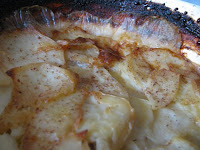 I was most impressed with my pasta bake. I was going to mix all the ingredients together but was not sure any of my mixing bowls were large enough so I had layers. I loved the indulgent creamy pasta and potato with a layer of healthy vegetables and lentils, all topped with crispy cheese, breadcrumbs and seeds. I served it with tomato sauce.

I have had a stab at a recipe below but I do not advise you cook potatoes in milk for hours just to make the pasta bake unless you have oodles of time. However, if you do have some leftover creamy potatoes, I highly recommend you use them in this way. In fact, the thought of making this pasta bake again makes the search for the perfect potato bake all the more attractive. 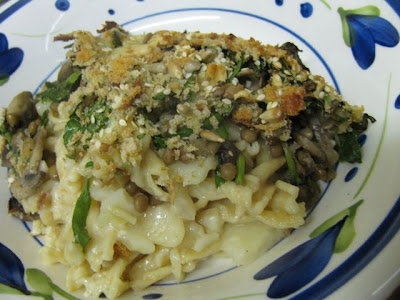 I am sending this pasta dish to Sara of I'm a Food Blog who is hosting this week's Presto Pasta Night (#115), an event founded by Ruth of Once Upon a Feast.

Heat onion, cloves, milk, bay leaves, whole garlic, nutmeg and sea salt in a medium saucepan til almost boiling. Remove from heat and set aside. (I pressed cloves into onion so they would be easy to remove without sieving.)

Peel and prick potatoes. Place each potato in the microwave on high for 1 minute (or 1.5 minutes if large). Cool slightly and slice to 1mm thick. (I wish I had a mandolin for this but don’t and so probably didn’t get exactly the right thinness.)

Grease a baking dish with the butter. Remove and discard onion, cloves, garlic and bay leaves from milk. Arrange potato slices in dish and then pour milk over them. I used a dish about 23cm square but I think I would use my large roasting dish in future.

Cover tightly and bake in oven for about 40 minutes. Then uncover and bake a further 20 minutes or until lightly browned and a knife poked in the centre finds the potatoes tender. (I just put the lid on my baking dish but the recipe suggests covering with baking paper and then foil. I also didn’t see the bit about taking the lid off for the last bit – oops!)

Cook pasta according to instructions on packet. When cooked, mix with potato gratin and 1-2 handfuls of grated cheese.

Meanwhile, heat oil in large frypan. Fry onion for about 5 minutes or until starting to soften. Add garlic and mushrooms and fry until mushrooms soften – about 5-10 minutes. Add spinach and stir briefly until it starts to wilt. Remove from heat and add lentils, balsamic vinegar, smoked paprika and cayenne.

Grease a large baking dish (I used my roasting dish) and place a layer of the potato and pasta mixture and a layer of the mushroom spinach mixture. Sprinkle with 2 handfuls of grated cheese, breadcrumbs and seeds.

Bake in 220 C oven for about 30 minutes or until topping is golden brown and crispy.

On the stereo:
The good, the bad and the queen – self titled
Posted by Johanna GGG at 09:55