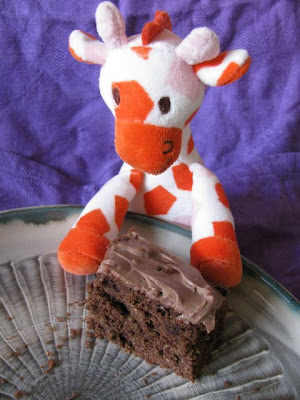 We had some visitors a few weekends back. It was a great excuse to bake a chocolate cake so I could be the hostess with the mostess. Actually, these days when I have visitors, I am usually so busy with Sylvia that I forget about offering a cuppa but fortunately E is always quick to put on the kettle. 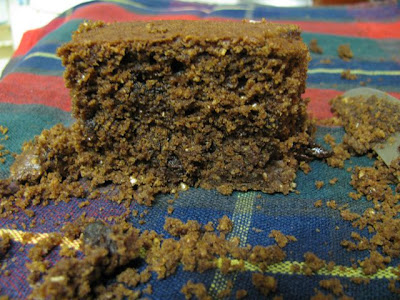 I had been wanting to try a chocolate cake made by Heidi from 101 Cookbooks. It is what she calls a ‘basic’ chocolate cake but I think it is far from it. For a start it has a cup of maple syrup instead of sugar. This is both a delicious and healthy alternative sweetner but not a cheap one and not one I would ever have considered when making my mum’s basic chocolate cake in my youth. It also has coconut milk, which is unusual but a great dairy-free alternative.

I made a few changes to the recipe. I added a bit of wattleseed and cinnamon for added depth of flavour, and I used choc chips instead of chopped chocolate. My most noticeable change was to use a different frosting. 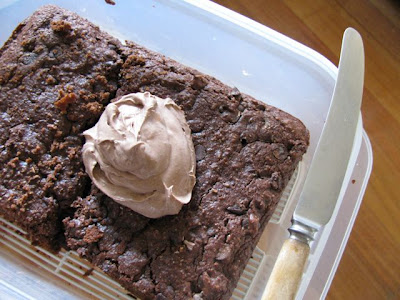 Heidi used a mixture of chocolate, butter, maple syrup and cream for her frosting. I don’t like cream much and don’t usually have it on hand. But I did have some cream cheese and still had fond memories of the cream cheese frosting I had made for the Wholemeal Chocolate Cake recently. I decided to make the chocolate cream cheese frosting but instead of using icing sugar I used maple syrup. It was delicious, though not so sweet. The cream cheese was low fat so it was a healthier frosting than Heidi’s. (I have just seen in this month’s Australian BBC Good Food magazine a suggestion for a chocolate ganache made with chocolate and coconut milk, which I think would also be an appropriate topping for this cake.) 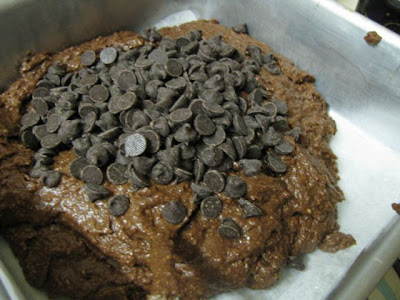 When making the cake I had a CRAFT moment (ie Can’t Remember A Flaming Thing). I tipped the mixture into the cake tin and remembered I hadn’t added the choc chips so I gently stirred these into the mixture while in the tin – but I don’t recommend this to anyone unless you are as forgetful as me.

The cake was lovely. Not overly sweet but soft and fudgy. In fact, it fell in half in my hands when I transferred it from the wire rack to the cake holder before going to bed. This may be the reason that Heidi cooled and served it in the tin. However I am in the habit of turning out cakes onto a wire rack to cool. It tasted fantastic warm out of the oven without frosting. But with a lick of frosting it went down well with our visitors – everyone happily took a second slice. Even the little giraffe (which Kym and Nick brought for Sylvia) loved the cake :-) 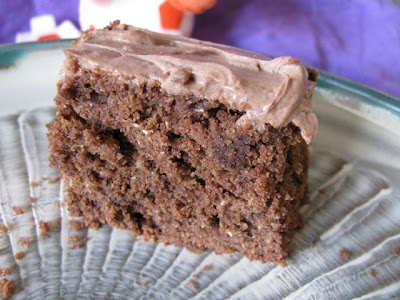 Place the flour, cocoa powder, baking powder, spices and salt into a large mixing bowl. In a separate medium bowl mix together the melted butter and maple syrup. Add eggs vanilla and coconut . Use a fork to lightly whisk these wet ingredients together and then add to flour mixture. Stir until just combined. Add chocolate chips and fold in to the mixture.

Pour mixture into prepared cake tin. Bake for 30-40 minutes (it was 30 minutes for me). Heidi suggests it is ok to be slightly under-baked and I agree. So the skewer needs to come out of the centre of the cake almost clean to show cake is ready to come out of the oven. Heidi also says to cool in tin but I turned out onto a wire rack to cool after about 10 minutes.

To make frosting, mix all ingredients in a small bowl with a spoon til creamy. Spread frosting over the top of the cooled cake.

On the stereo:
Aleph at Hallucinatory Mountain: Current 93
Posted by Johanna GGG at 17:20