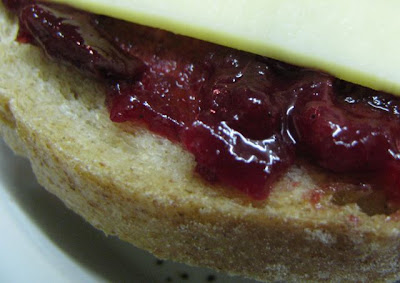 I rarely eat plums. Why? It’s a mystery. I love stone fruit and think plums are gorgeous to look at. Maybe it is because I have fond memories of blood plums that I ate as a child. Now I rarely see them in the stores and, when I do, they are soft and too sweet rather than tart and crisp. But I do love plum jam. So it was no surprise to find a plum and apple chutney recipe that delighted me. 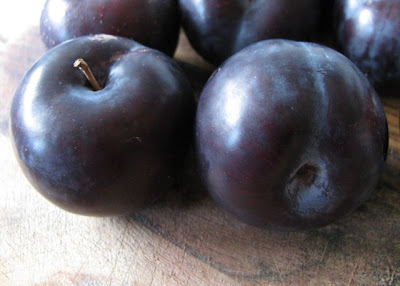 I saw the recipe in the Australian BBC Good Food Magazine that my mum lent me (I promise I will return it one day, mum). I bought some plums that looked a pleasing hue. But then I struggled to find time and energy to make it. Not just the time to make sure I stirred it enough so it wouldn’t stick but also to prepare the jars.

I finally made the chutney when my plums had sat in the fruit bowl a couple of weeks and I was beginning to worry they would go mouldy before I got a chance to preserve them. Isn’t it strange the things that motivate us! I only learnt to ride a bike when I was young because my mum told me if I didn’t use my new bike it would be given to my younger sister. I learnt to ride quick smart! 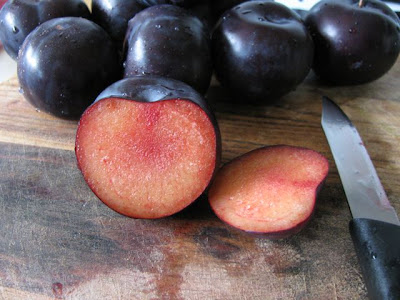 I made it on the weekend when E was about and my dad was visiting. This was useful as I was able to ask them to help with frequent stirring when I was occupied with Sylvia. I hadn’t checked the weight of plums needed for the recipe so I needed to adjust measurements from the 1.5kg to my 600g of plums. I also found that mine took half the simmering time suggested by the recipe. 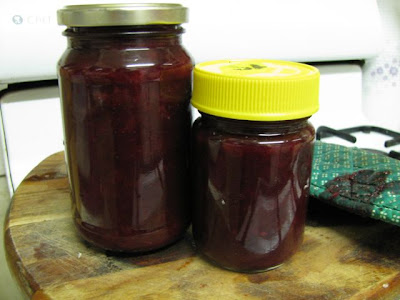 The resulting plum chutney was a dark and brooding sauce (a little neofolk, said E) with spicy flavours that were not so strong as to obliterate the plummy taste. I have a photo of the inside of the plums because it is a mystery to me how such light flesh becomes such a deep purple colour. Maybe it is the dark skins with the blue-purple colour of a bruise? Whatever the cause, that is what I love about plum jam and plum chutney. Who can resist such a hue!

When it was first made, I tasted the chutney and found it a bit rough textured with the finely ground spices. But once the chutney had sat for a bit, this odd texture disappeared. I found a recipe for plum chutney by Rita Erlich on the web. She suggests placing whole spices in a muslin bag while you simmer the chutney for a smoother texture. She also says to keep a couple of months before using. I am sure this is good advice but I am too impatient or disorganised. 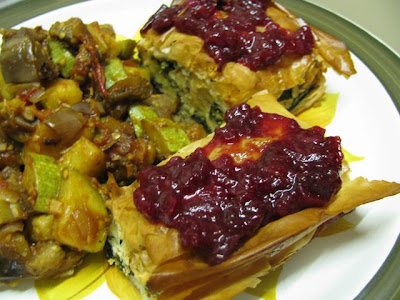 The recipe suggested it would make a fine accompaniment to venison. Not in my kitchen. We ate it with gusto with everything from cheese and bread to vegetarian sausages to the spanikopita that my mum made for us. It improves any food. We are on to the second and last jar now. I wish I had bought more plums so we could have oodles of bottles in the pantry for our pleasure and to give away for gifts. Maybe next year.

Place all ingredients in a large saucepan and bring to the boil. Reduce heat and simmer for 30 – 60 minutes (the recipe said 60 minutes but mine took only 30 minutes) till slightly thickened and syrupy.

I poured some hot water over jars (using tongs to empty them in the sink) and let them air dry. I spooned hot chutney into the dry jars and sealed them straight away.

I wasn’t too bothered about sterilisation because I knew it wouldn’t last long. (If I thought the chutney would sit around longer I would boil the jars for about 10 minutes in boiling water.) I made two jars and when I opened the second jar (which had been in the pantry) after 3 weeks (in which we ate the first jar) it was fine. Keep in fridge once opened.

On stereo:
The hill for company: Sodastream
Posted by Johanna GGG at 11:49