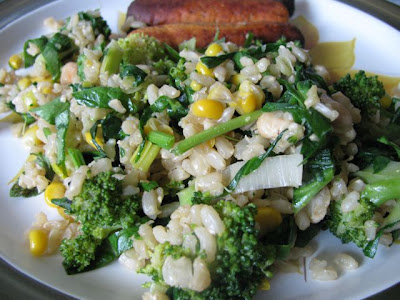 About a month ago we had wild thunderstorms in Melbourne. The sort of day in which E took 2 hours getting home from work rather than the usual 45 minutes. The drought makes it hard to complain about rain (Melbourne’s water storages are only 27% full at the moment so rain is desperately needed for dams, farmers and gardens), although I am not sure why it falls in the wrong places. In February, when we had the terrible bushfires of what is now known as Black Saturday, up in Queensland they had widespread flooding. 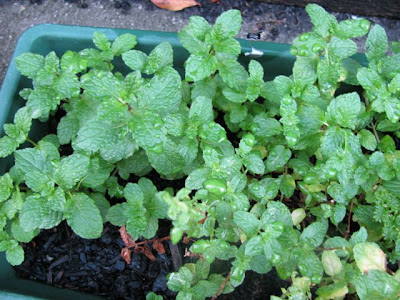 In a similar way, it seems as soon as we get rain, the plants in the backyard do ok but the weeds absolutely thrive. The one pot plant I have which really laps up the rain and spreads like a weed is mint. In fact it has jumped into the parsley pot and completely taken over.

I found a Bill Granger recipe which I think I found in Delicious Magazine some years ago. It had barley, broccoli, Asian seasonings and mint. I was intrigued. A new way to use mint. I made a few small adjustments to the recipe. I didn’t have barley so I used brown rice instead. I changed the vegetables slightly, including some leftover leeks from the previous night's Mushroom and Lentil Ragout instead of spring onion.

The seasonings were very subtle but gave the rice a lift. The first night we had it warm with polenta chips and ragout. The second night I added some spinach and served it with vegetarian sausages. I even had some cold for lunch. Delicious! Not E’s favourite but I loved the interesting flavours in the combination of an Asian dressing and mint. It is hard to resist a salad with lots of substance, protein and green vegetables. 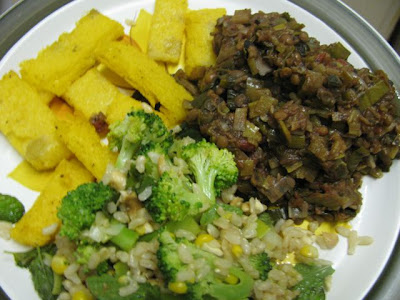 I am sending this to The Daily Tiffin who are hosting the Grow Your Own Event, which was created by Andrea’s Recipes. This event encourages bloggers to share recipes using produce from their garden or from gardens of friends and family.

Cook the brown rice in boiling water for 30 minutes (or using your own method). Meanwhile steam broccoli florets and corn. Cut the kernels off the corn cob. Make dressing by whisking (or shaking in a jar) all the ingredients. Place broccoli, leeks, corn and mint in a salad bowl. When rice is cooked and drained add to bowl. Toss through with dressing and sprinkle with cashew nuts. Serve warm or at room temperature.