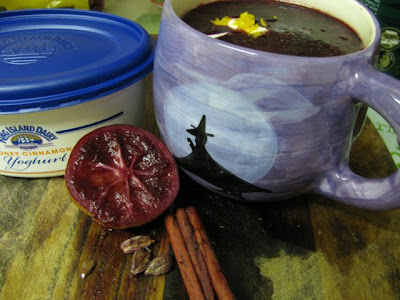 I have a new love and it is all due to being confused about ingredients needed for Wendy’s lovely blueberry soup. There are advantages to not checking a recipe properly!

Rushing through the supermarket I was sure I needed yoghurt. Usually I either buy natural unsweetened yoghurt or fruit yoghurt. But I had seen a King Island honey and cinnamon yoghurt that seemed just right for a fruit soup. For those readers who aren’t Aussies, King Island cream is to Australia what clotted cream is to the UK. It is rich and delicious.

The soup I was making was a Finnish soup called Mustikkakeitto or Blueberry Soup which I had seen on a Wee Bit of Cooking. Now I have only made one fruit soup before – a summery strawberry soup. What interested me about Wendy’s soup was that it was warm and spiced. Such a great idea as the nights gets darker and colder (and now that frozen berries are easy to buy). 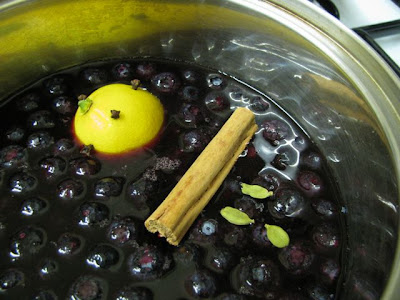 I added a few more spices than Wendy and it was quite rich. I also ignored her instructions to sieve it and thought I could take out the cinnamon and the clove studded lemon (from our tree – just the lemon, they don’t grow studded with cloves). Unfortunately my cinnamon stick was a little crumbly and we had a few little splinters appearing in our soup so next time I will need to sieve it (or put the cinnamon in a large tea infuser or muslin bag). I also used pomegranate juice rather than cranberry juice.

I love a mulled wine but don’t make it often and we don’t have cosy pubs with it like they do in the UK in winter. This soup reminded me of mulled wine with similar warming spices. (Which is why I couldn’t resist the temptation to add a slurp of cointreau.) Just the sort of thing to sip from a mug in from of an open fire and cup ones hands around the warm mug. Unfortunately we don’t have a fireplace so we have to sit in front of what E calls ‘the fireplace for the noughties’ – the telly!

The blueberry soup was wonderfully rich and fruity. Half a cup could have done me. E only drank half his and then tipped the remains down the sink – I was most displeased with him! I had bought his a neenish tart from the Rathdowne Street Food Store earlier in the day. It ticked all his boxes – a pastry case filled with jam and buttercream and covered with icing. I suspect it might have ruined his appetite. 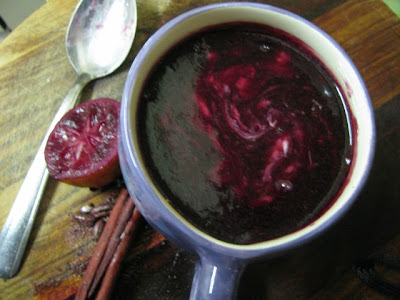 On the other hand I was most pleased with my gloriously deep purple soup. Although, it wasn’t in Wendy’s recipe, I spooned some honey and cinnamon yoghurt into it. In my dreams I imagined sprinkling pomegranate arils across a white cloud of yoghurt but it seemed to too extravagant. Then I decided to grate orange zest over it but that came out in a clump. So in the end I think the yoghurt was all that was needed. I am not sure that the yoghurt made a huge difference so maybe I didn’t use enough. Perhaps a bit more would have helped cut through the richness a little.

So we are back to my new favourite honey and cinnamon yoghurt. I was pleasantly surprised with how delicious it tasted. Refreshing and not nearly as rich as King Island cream. You may have noticed I have been quite partial to honey of late. But I did fear it would make the yoghurt too sweet. I must confess I loved this yoghurt so much that I ate the remains of the tub later that night. It was just so good. I have never liked cream on my desserts but am now finding that I need a dollop of this yoghurt on fruit desserts or perhaps with a piece of cake. Expect to see more of it on this blog.

Press the cloves into the peel of the lemon half. Place this along with the blueberries, pomegranate juice, maple syrup, cinnamon stick (in a muslin bag), cardamom and nutmeg to a medium saucepan. Bring to the boil, reduce the heat and simmer gently for 10 minutes. Remove from heat. Discard the cinnamon stick, cardamom pods and lemon with cloves. Use a hand held blender to puree the soup. If the cinnamon stick was not in a muslin bag you might want to sieve the soup. Dissolve the cornflour and water and add to the soup. Return to heat and stir til soup thickens slightly. If using cointreau, stir it in now. Serve in mugs with a dollop of yoghurt.

On the stereo:
Wagner: the Ring: An Orchestral Adventure
Posted by Johanna GGG at 20:58