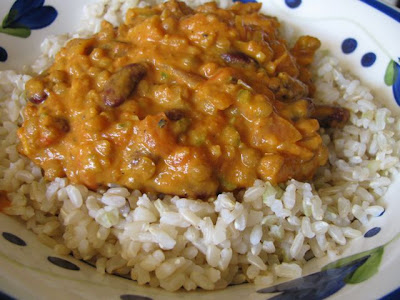 When seeking out new Indian dishes to inspire me I have seen many versions of Dal Makhani (aka maa ki dal, maa di dal or kaali dal). I love dal and the pictures I have seen of this intense rich Punjabi version of the spiced lentil stew have beckoned me. Most recently I saw a version on Dhivya’s Culinary Bazaar that I decided to try.

I found I had to make a few changes to suit my ingredients and preferences. Dhivya soaked and cooked 1 cup of whole black lentils (whole black urad dal), but I used a tin of brown lentils. I did use dried kidney beans because I had some left in the pantry. I made other minor adjustments. The main change I would make next time is to 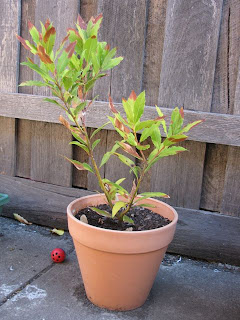 reduce the cardamom because it seemed a much stronger flavour than the other spices, so I think half a teaspoon next time.

I was pleased when the recipe called for a bay leaf that I could duck out to the garden and pick a fresh one. It is a joy having a stock of herbs by the back door but it has been a bit of work tending them in the hot weather. I have included a photo of my little bay plant here to show you how sunburnt it has been in the recent heat.

I also chose to use a fresh green chilli rather than chilli paste or cayenne pepper which I sometimes use. I particularly dislike chopping chillis and usually wear rubber gloves to avoid having them all over my hands. I didn’t when I started chopping this chilli and managed to wipe some of the chilli on my cheek and got a red burning mark there for my troubles. So I was interested to see in one of the early scenes in SlumDog Millionaire that not only do others wear rubber gloves to handle chillis but also just how painfully chillis can burn the skin in the case of direct contact.

Dhivya served her dal makhani with roti which seems quite traditional according to the Wikipedia entry. I also have found versions of dal makhani written up by Lisa, Meeta, and Jai and Bee if you are interested in seeing how others approach it. 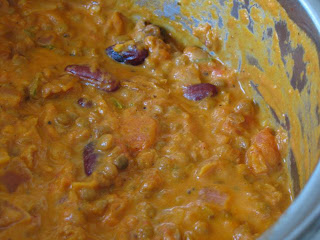 I served it with brown rice and some sticks of raw carrot and cucumber. It was a bit intense without a few vegtables on the side. I had good intentions of making a vegetable side dish (Palak Paneer) but ran out of energy. Nevertheless, it was well received. It was creamy and rich with lots of interesting spices. The cream helped reduce some of the bite so it wasn’t too hot for me. E loved it and was delighted to hear that we had leftovers for the next night.

This legume-rich dish is just right for My Legume Love Affair so I am sending this to Susan at the Well Seasoned Cook who founded the event and is hosting the 'eighth helping' this month.

In a large saucepan, melt butter, add cumin seeds for a couple of seconds and then add onion, cloves, cinnamon, turmeric, coriander, ginger, garlic, and chilli. Sauté around 5-10 minutes til onion is soft and spices smelling aromatic. Stir frequently to stop the mixture sticking.

Add the diced tomatoes, lentils, kidney beans, bay leaf and water. Add salt to taste (I merely added a pinch). Bring to the boil. Reduce heat, cover and simmer for15-20 minutes. Stir occasionally to prevent the mixture catching on the bottom of the saucepan.

Add the fenugreek leaves (if using) and the cardamom powder, stir and then add the cream. Gently simmer uncovered for 5 minutes. Remove bay leaf.

Garnish with fresh coriander if desired. Serve hot with rice, naan and/or roti.

On the stereo:
Gods and devils: Seelenlicht
Posted by Johanna GGG at 17:51