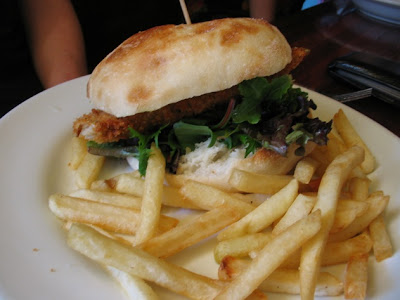 A few Mondays back, E had tickets to see Harmonium play at the East Brunswick Club. I had read good things about it from Cindy and Michael and seen Lisa write up the vegan chicken burger as one of her top five meals of 2008. So we arrived early enough to sample the food.

Fortunately I was prepared for a vegan friendly menu that heavily relied on faux meat. The menu had four dishes: chicken burger, chicken parmigiana, cheese and bacon burger, and pasta. Each was available in a meat or vegan version. Not a menu to enthuse me. I checked and was told that there were no other options. The only faux meat menu I would really fancy might be something with vegetarian sausages. (Now if they had bangers and mash I’d be in like Flynn.) E chose the vegan chicken (or tricken) burger and I reluctantly chose the fettuccine bolognaise because it was the one option without a slab of meat of any persuasion.

The food is good honest pub grub as befits the unpretentious nature of the place. While we waited to be served we had time to check it out. The EBC is an old fashioned Aussie hotel that relies on the buzz from the youthful crowd rather than from fancy décor. A few band posters adorn the walls alongside the blackboard menus. Entertainment comes in many guises – a couple of retro pinball machines, a pool table, large screen tvs, and even a couple of DJs in the corner. Most of the tables were full of young people enjoying each others’ company. Many of the students seemed to dress in retro 1980s fashions, but they barely looked old enough to have been born then, which made us feel old! 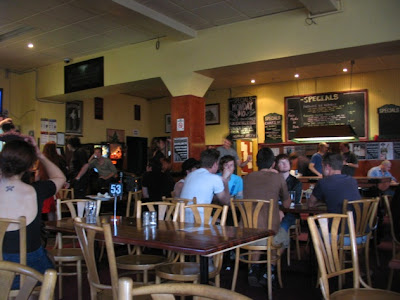 As I wait I notice that the meals are served as they are cooked, with no timing them for groups to eat together. When we arrived, it was busy and we could only find a seat at the other end of a table to a young couple. The guy got his burger first and the two of them politely pick at the chips before he apologetically said he would eat his burger before it gets cold. Later I teased E about what an old married couple we looked when he was served first and started eating straight away, telling me that I eat faster than him anyway! That was fine with me, as I was happy to pick at his chips (which were good but not great).

My fettuccine bolognaise came after a bit and was quite dull. I was thankful it had very little in 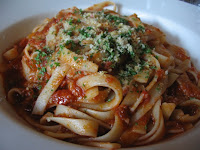 the way of faux mince but would have loved more veg than the thin tomato sauce. (It made me appreciate the pasta at Kalamata a few weeks ago.) I had a small taste of E’s chicken burger but was not that interested in it. He thought it ok and comparable to the Linda McCartney style meals he used to eat in the UK. I thought the best bit was tearing bits off E’s delicious ciabatta bun, which was spread with mayo and avocado, and making little chip butties.

Luckily I remembered Cindy swooning over the desserts and she knows her desserts. So instead of struggling through much of the pasta I decided to get my protein from the peanut butter cheesecake. En route to the bar to order, I spied someone being served the chocolate brownies which were drizzled with a deliciously gooey chocolate sauce. I almost changed my mind about dessert but the barmaid persuaded me the cheesecake was worth trying. And it was very good. It was baked, with the peanut butter giving additional richness to the thick creamy cheesecake. With a chocolate biscuit base and a chocolate sauce over the top, I got enough of my chocolate fix. According to Cindy, the desserts are all vegan, but I would not have known. 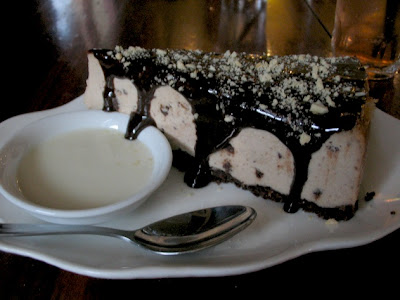 By the time we had managed about two thirds of the cheesecake between us, the clientele had changed to a scruffier, older set. Less wide-eyed excitement and more laid back cool. Sure, there were still some youth about, but suddenly I was feeling like a younger part of the crowd. Not surprising given that the ages of the band were 58, 64 and 74. But they had a lot of energy and played amazing music. E described it as spacy, drony, dreamy. Sometimes they were so quiet I could hear beer being poured at the bar, while other parts rocked out! Harmonium could be described as a Krautrock supergroup comprising Roedelius, Moebius and Michael Rother (from Neu). You could be forgiven for not having heard of them and I don’t know if they will be in Australia again. But it seems that the EBC holds some interesting gigs.

I hope we will be back at the EBC for their honest down-to-earth pub grub. If I do, I have already decided on my order. It will be the chicken burger which I will eat without the ‘tricken’ and I will definitely have dessert. I will not be expecting restaurant service or gourmet food. But I will look forward to the good vibes.