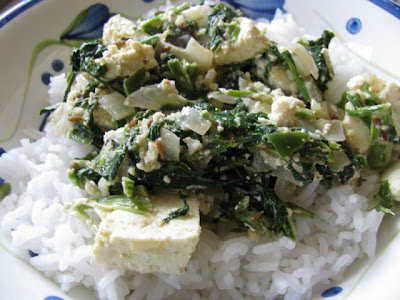 Recently I bought a packet of paneer at supermarket on a whim. I don’t recall cooking with it before so I was curious, even though I have eaten it elsewhere.

After the packet sat in the fridge a while, I turned to what was the most obvious dish to try – palak paneer or spinach and cheese curry. I found a recipe on the BBC website which didn’t seem too daunting. I used a 250g packet of frozen chopped spinach rather than washing, blanching, cooling and finely chopping 750g of spinach. In retrospect I wondered if I needed more spinach and if it should have been chopped a wee bit finer. I also made a few small changes to the spices.

I found the taste of the paneer surprising. I thought I had read it was interchangeable with halloumi and therefore I had expected it to be quite salty. But it was comparatively bland, although the texture was similarly quite hard. I’d like to try the palak paneer again and to try the paneer in other dishes too.

The end result was very spicy. In fact, it gave me a good laugh that E added Tabasco sauce to the curry because he thought it looked like it wasn’t spicy enough. I regularly tell him to taste before he adds 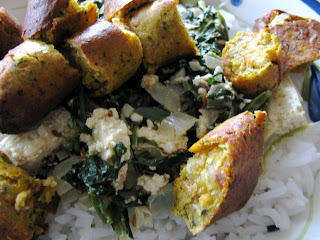 Tabasco but he wont be told. He said his was very very spicy.

E liked the palak paneer but thought it had a little too much spinach. I think it is really a side dish rather than a main meal, even with rice. On the first night I served it with vegie sausages and the second night I served it with a vegie burger and some aloo jeera (potato with cumin). Originally I had planned to serve it with the dal makhani that I had made earlier in the week but didn’t get organised enough. Maybe another time as I think these dishes would complement each other nicely.

After dinner we watched a DVD of As it is in Heaven which my dad had bought us because he loved the film so much. It is the story of a big-city conductor re-discovering life in a small town in Sweden. It is full of joie de vivre and interesting character sketches with an ending that is both heartbreaking and heart lifting! If you haven’t seen it I highly recommend it.

Heat the oil in a large saucepan. Add the cumin and fry for about 30 seconds, until fragrant, then add the onion and fry over a low heat for about six minutes, until soft. Add the ginger, garlic and chillies and cook for a further minute.

Add the ground coriander and salt to taste. Cook for another 30 seconds then add the spinach and a splash of water if necessary. The mixture should be loose but not watery. Bring to a boil and simmer for three minutes.

Add the paneer cubes, garam masala and cream. Stir and cook for a few minutes or until the spinach is creamy. Stir in the lemon juice and check seasoning. Serve with rice or naan bread.